Now that our 7-month-old Ram 3500 truck has crossed 10,000 total miles and about 5000 towing miles I’m back with a review update.  We have just completed our annual winter RV snowbird journey from British Columbia down the west coast and into the southwest desert and back. It’s been a good test for the truck towing a variety of roads and landscapes.

I won’t go through all the pros and cons, etc. This video is just an update to let you all know how it’s been performing and whether any new defects or dislikes have cropped given more use and mileage. (See initial full review after 4000 miles)

Rig Specs – The truck and trailer combined weigh in at around 18,000 lbs fully loaded up with the truck coming in about 8600 lbs and trailer 9400 lbs. Note: It can vary a few hundred pounds depending on how much water, waste, LP Gas, and fuel we have onboard.

Fuel Milage – When towing we averaged anywhere from 10 MPG up to 13.5 MPG. I generally towed at speeds between 62-65 mph (around 100 kph) The low fuel mileage figure of 10 MPG came during severe duty conditions such as pulling steep grades at high speeds or into strong headwinds.

The highest figure of 13.5 MPG was measured with low wind on flat straight roadways, and at moderate speeds. Elevation also affected milage with slightly better numbers at lower elevations. Overall I’d say the average for the 6-month trip when towing came in around 11.5 mpg.

As far as unloaded mileage, just driving the truck itself, we saw anywhere from 18 – 21.5 MPG. Surprisingly the truck could still get great mileage at freeway speed of 75 MPH (120 KPH). I imagine it has to do with the high rear end gears of 3.42 and the 6-speed transmission.

I haven’t heard any owner of a modern diesel truck not gush at their incredible performance capabilities, and I’m no exception. Sure they are complex beasts and horribly expensive, but they live up to the power, and torque that automotive companies love to advertise.

Our new trucks 6.7L Cummins diesel engine combined with the AISIN 6 speed transmission boosts 930 ft/lbs torque & 385 hp. Our Ram drags our house on wheels behind it with little effort at all.

Up steep grades, where my old 1994 F350 7.3L would be struggling and running hot our new Ram cruised along cool as a cucumber. Where my old beast would be crawling up an 8% highway grade at 35-40 MPH (60-70 KPH), the new truck could basically climb it as fast as I desired. I didn’t hit a hill I couldn’t easily climb at the posted speed limit.

Another area the new truck excelled in was passing power. Gone are the days of getting stuck on a hill behind a slow semi truck lacking the ability to pull out and quickly pass them.  The extra power was also much appreciated on busy freeways for on-ramp merging and safely avoiding congested traffic.

“Another feature is the “smart” exhaust brake. The VGT™ Variable Geometry Turbo is enhanced through the addition of a brake feature that electronically controls the exhaust braking to maintain a set vehicle speed while descending a grade.”  Quoted from the Cummins Website

Everyone told me I would love the Cummins turbo exhaust brake and they weren’t kidding. One example of its use was on a long downgrade coming into Bullhead City from Kingman on Arizona Highway 68. It’s about 12 miles of 6% grade with a 45 MPH (72 KPH) curve and a stop light at the bottom. I locked out the 5th and 6th overdrive gears and descended in 4th gear at 55 MPH (90 KPH) with the Auto Exhaust Brake on.

The exhaust brake held the truck and trailer at the 55 MPH speed +/- a mile or two each way the whole way down without having to touch the regular brakes until the ending curve and stop light. Awesome! The exhaust brake is also handy when navigating hilly, curvy terrain like that found along the west coast. It adds another layer of speed control and reduces brake wear.

A lot of people asked about how much DEF I needed to use, and many told me its a massive pain with the new trucks. Well, so far, I haven’t found that to be the case. I added five 2.5 gallon jugs during the 10K miles with 5K miles of towing.

It’s straight forward to add to the DEF filler port, pour it in using the DEF jugs included plastic filler hose. The cost runs around $15 for each 2.5-gallon jug. It’s cheaper at the truck stop pumps, but I found the jugs to be more convenient. 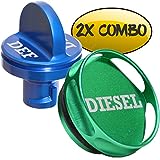 The truck came with a set of Firestone Transforce tires. I don’t have anything particularly negative to say about them. They did the job. They’ve held air well. I haven’t had to top them up at all. Handling and braking seem OK to me. Nothing special but I don’t expect much on a large one-ton type truck.

I’m finding the rear tires are wearing much faster than the front I guess due to the extra weight of the fifth wheel on the rear axles. Other than that no irregular wear patterns have emerged. I’ll rotate them for use this summer and plan to replace them with a higher quality aftermarket set of tires in the fall for our next extended RV trip.

I’m pleased with how the truck handles the fifth wheel. Towing is smooth and stable with good cornering. In fact, I even find it a little more stable in strong winds than my old dually. So I don’t miss having the dual rear tires. I was initially worried about 6″ bed rail clearance but turned out to not be a significant problem. The truck and trailer handled dips in the road quite well with clearance to spare.

The only time I came close to the rails was when off-road boondocking I found the hitch has a lot of play side to side. So I had to take extreme care on uneven dirt roads. I still plan to raise the trailer 3-4 inches to allow me to raise the hitch another notch or two, but it’s now not a priority. 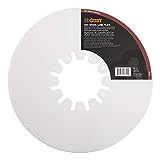 In my earlier review, I complained about how finicky the Ram M20 hitch was to unhitch, but with advice from several folks I figured out what I was doing wrong. Now unhitching is s breeze. What I needed to do was chock and jack the trailer leaving a little weight on the hitch, then put the truck in neutral briefly to remove any fore or aft pressure. After this, the release arm pulls out with ease, and I can use a second groove on the arm to lock it open. Next, I continue to raise the trailer just until the weight comes off the hitch, then pull the truck away. (Here is the video demo)

Well, the new Ram 3500 has just had its first factory recall to fix an issue in its steering linkage. Basically, there are a pair of adjustment nuts on what’s called the drag link assembly. They may come loose and cause a loss of steering. I took mine into the dealer, and they inspected and welded the nuts in place as detailed in the safety recall. Glad I got it done as losing steering towing a heavy fifth wheel would not be a fun thing to face.

I happy with my purchase of the 2018 Ram 3500 Cummin diesel truck and at this time have no regrets. If the Ram continues to perform in the years to come as it has done in its first 10,000 miles, I will be a very “happy camper.” I’m extremely pleased to have the extra power and braking which makes towing a heavy trailer a much less stressful experience. Add the modern airbag system plus other modern safety features and I feel much safer in the new truck compared to the old one.

Going forward, I will continue to document any problems that arise with the truck plus any upgrades or mods I do to it. Keep an eye on the blogs “Ram Truck” category I created or sign up for my monthly newsletter.  – Cheers, Ray 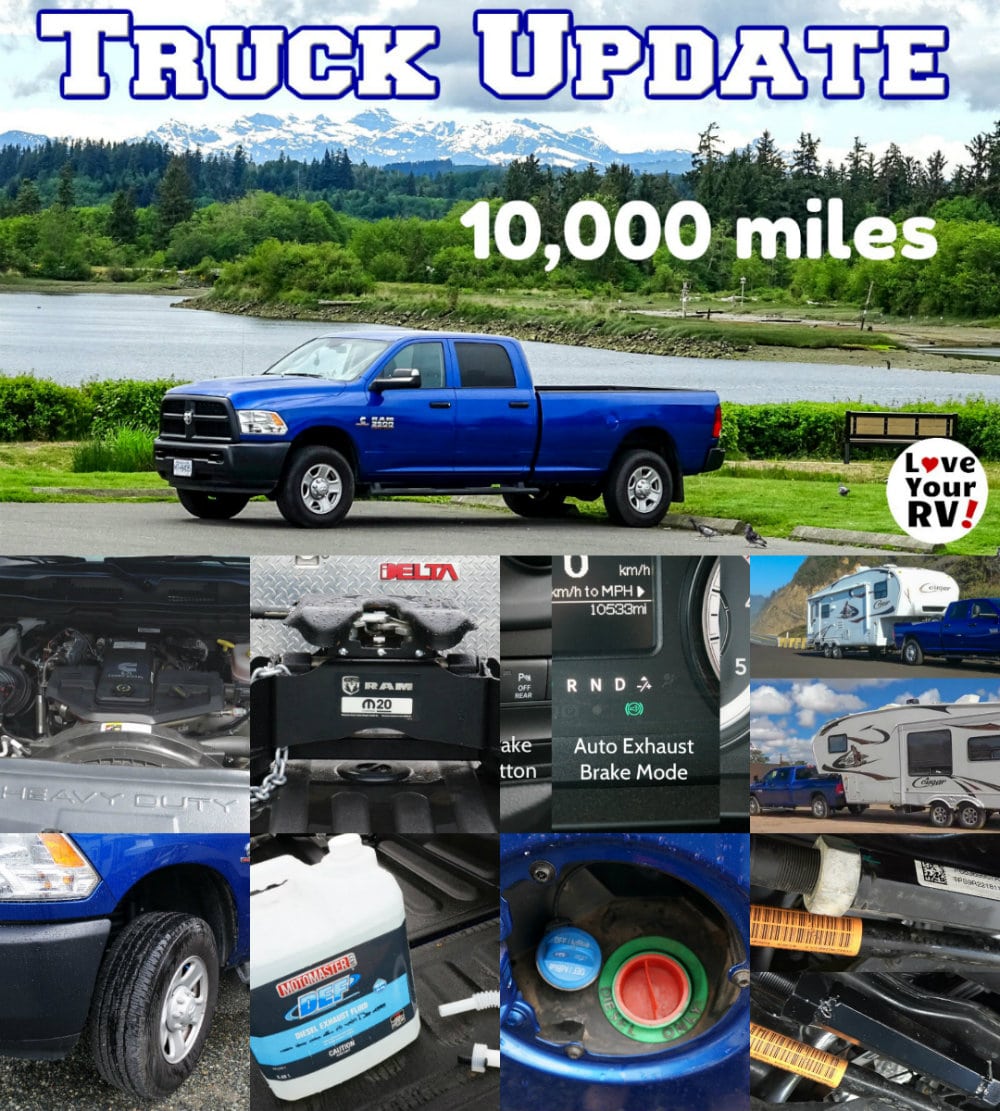