In this video, I conclude my initial review of my new Lion Energy Safari UT 1200 lithium batteries. I have 3 of their 12V 90Ah batteries wired in parallel to produce a 270Ah bank. They are replacing 4 Interstate 6V golf cart batteries we have used for the last 3-4 years.

So far, I’ve published nine videos related to the new batteries. Video topics include introduction and features, installation and wiring, charge, and discharge tests, battery box mods plus showing what’s inside the batteries.

Compact Size – The Safari UT footprint is a little smaller than many other so-called 12V drops-in type lithium batteries on the market. They are comparable to a Group 24 sized lead-acid.

No Need to Fully Charge – Unlike lead-acid batteries, the Lion Energy lithiums don’t require charging to 100%. This will reduce the generator run time when boondocking.

High Discharge Capacity – Rated for 150 amps continuous discharge and capable of 250 amps for one minute and 900 amps for a millisecond.  An excellent battery for powering high wattage appliances and heavy current loads. Unlike the old lead-acid batteries, the new lithium-based ones don’t suffer from Peukarts Law drastically losing amp-hour capacity at higher discharge rates.

High Charge Rate – The Safari UT battery can be charged at a maximum of 100 amps. Charging takes place in a linear fashion, meaning it will recharge from fully depleted to 100% charge in less than 1 hour. Recommend charge rate is around 50 amps for extended battery cell life, but that’s still pretty awesome. Lead Acid batteries charge fast to about 80% but take many hours to finish off the last 20% as their internal resistance increases when close to full charge.

All in One Package with Quality Custom BMS – The battery is a complete lithium solution billed as a drop-in replacement for regular lead-acid RV batteries. Everything is built into the battery case, including four lithium cells, wiring, and a custom BMS. The Lion BMS (battery management system) keeps the cells in balance and protects the batteries from over/undercharging, hot and cold temperatures and excessive current, etc.

Long Shelf Life – The Lion battery can be stored for as long as two years, no trickle charge required.

Built-in Carry Handles – Thought it was a nice touch that they incorporated convenient carry handles on the top of the battery.

Install Anywhere – Short of extremely hot or cold places you can install the Safari UT batteries anywhere. Unlike flooded cell lead-acid they don’t produce dangerous gases when charging and can be positioned in any orientation.

Safe Lithium Chemistry –  Lithium batteries aren’t all created equal, there are many different chemistries on the market; each has advantages and disadvantages.  The Lion Energy Safari battery uses LiFePO4 (Lithium Iron Phosphate). LiFePO4 is less energy-dense than other chemistries but extremely safe. It’s ideal for making RV batteries where, unlike smartphones, laptops, or toys, size isn’t as big a concern.

Long Lifespan – If manufacture estimates are accurate, the Safari UT battery should last for over 3500 full discharge/charge life cycles. Avid boondockers can expect 20-30 years, and even then the battery would still retain 80% of its original capacity.

Upfront Cost – By far, the biggest drawback to lithium batteries is the initial cost. Over time they do end up cheaper than lead-acid, but it takes many years if not decades for that to happen. Even with a sale price of $799, a single Safari UT 1200 battery is about three times the price of a comparable capacity lead-acid battery.

Confusing Warranty – The Lion Battery comes with what they call a “Limited Lifetime Warranty.“ The manual indicates it’s not based on actual time but the expected lifetime of the lithium battery cells. It says the end of warranty comes when the lithium cells are worn down below 80% capacity and expected life cycles of 3500 is complete. In my mind, they have left a lot of wiggle room to deny a warranty claim since there is no minimum expected time limit. We are left to trust the companies advertised battery lifespan ratings, life cycle counter and to do the right thing if the battery capacity fails early.

LIMITED LIFETIME WARRANTY
This warranty for the unit is extended to the original purchaser or user and it covers defects in materials and workmanship. The Safari UT 1200 has a limited lifetime warranty of the battery cells, rated at 80% of the capacity (90Ah x .8 = 72Ah). Under extreme use (maximum charge and discharge rates) the battery cells expected life cycle is 3500. At “normal usage” the expected life cycles will be greater.

This type of warranty wording isn’t so much a Lion Energy thing. I’ve seen lots of wiggle room left in most companies battery warranties including other popular brands.

Cold Weather Issues – The internal BMS protects the lithium cells by cutting off charging the batteries when they are below 32F/0C. This could be a problem for folks that do a lot of cold weather camping and need to be able to charge below freezing. The batteries would have to be mounted inside a temperature-controlled area or heated in some way.

Early Marketing Fumble – When Lion Energy launched the Safari UT 1200 battery they rated it at 100 Amp Hours and 1200 Watt Hours capacity in their marketing.  I found this odd as the battery was listed in the owner’s manual rating sheet as 90 Ah. After several reviewers started testing the battery and pointing out that it wasn’t able to test at 100 amp-hours or 1200 watt-hours, they quickly re-rated the battery. Here is a blog post they published afterward explaining battery ratings, including in house testing.

It definitely was a stupid thing to overrate the battery by rounding up the spec numbers. Folks spending that much money on a battery want to know they are getting all the capacity advertised. My own amateur testing has shown the revised specs are likely correct. The company did respond quickly correcting their mistake however I feel bad for people that bought the battery before the change thinking they were getting 100Ah capacity.

If you do a lot of off-grid camping and are into RVing for the long term, then I think a lithium battery like the Lion Energy Safari UT is worth considering. They are small and lightweight even compared to other lithium contenders without giving up performance. Pricing is high but in the ballpark with others sold as an all in one drop in solution by USA based companies.

The internal build quality looks great. I don’t see any reason they won’t last for decades and vastly outperform the old lead-acid technology. I plan to use my new Safari UT battery bank for my boondocking adventures in the southwest come the fall. Stay tuned for updates as I break them in and see how they perform over the months to come.  Cheers! Ray 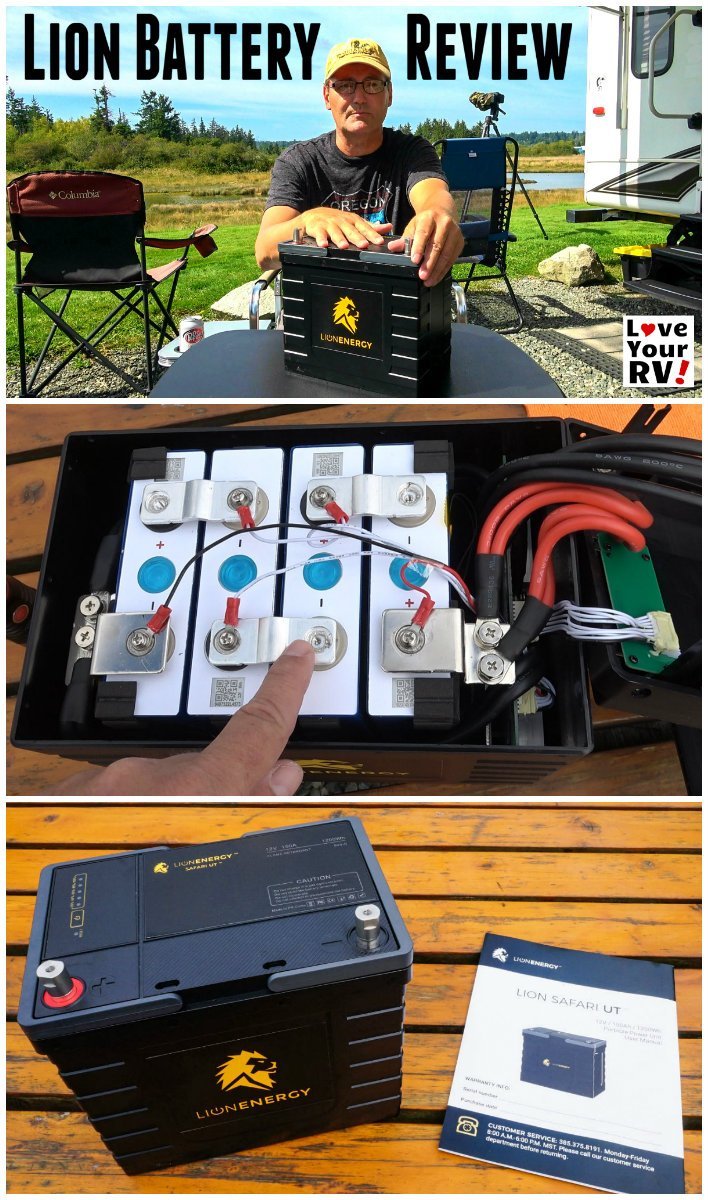