Why We Need to Boost the Cell Signal

For a few years now we have traveled in our RV using a Verizon MiFi Hotspot as our primary source of internet connectivity. It works through the cellular data networks just like a smartphone but without the phone part. Built into the MiFi device is a router allowing up to 10 connections, so both my wife and I can be on the internet surfing at the same time. Our MiFi is called a Jetpack and is capable of connecting at 4G speeds which are very fast. When we are nearby any sort of large town or an Interstate highway we will usually get a 4G connection, which makes web surfing, email and even streaming video a breeze.

As we venture further afield though (as we often do to boondock) the signal quality drops first to 3G and then to an extremely slow connection called 1xRTT. I’ll spare you the technical mumbo jumbo and just say 1xRTT is painfully slow. Loading a web page can take minutes and uploading a photo usually times out. Because we are now really into exploring more remote areas and boondocking we needed to find a way to boost our incoming cell signal. So after I did some research online and talked to veteran full-time RVers the most cost effective solution for our needs seemed to be a product made by Wilson Electronics called the Sleek 4G. 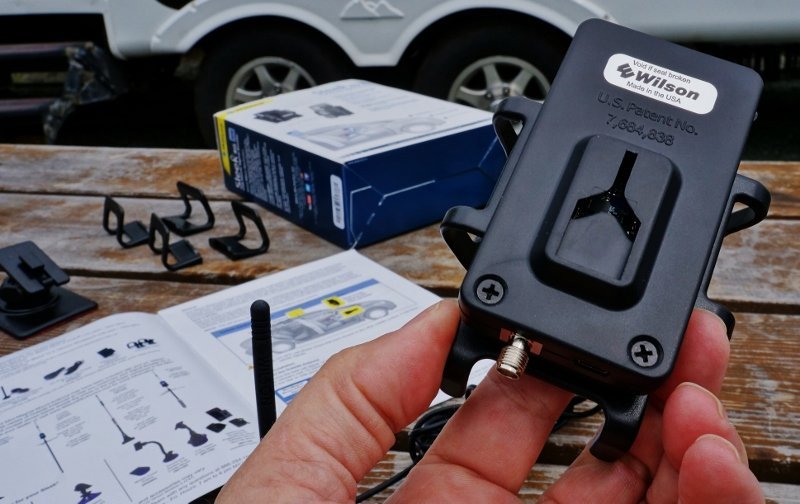 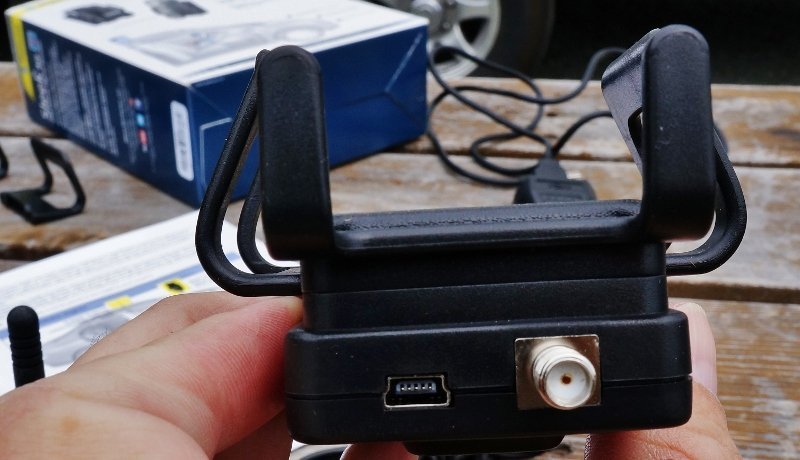 The Wilson Sleek 4G is a cell phone signal booster and it also works with MiFi hotspot devices like our Verizon Jetpack. It works by receiving the signal on an external antenna, amplifying the signal and then repeating it to your cellular device placed in its cradle. The package I picked was the Sleek 4G “V”. The “V” stands for Verizon and operates on the 4G band Verizon uses. There is another model that uses the AT&T bands and is marked with an “A”. Inside my box was the Sleek cell amp itself, a little magnet mount antenna, a 12 volt DC automotive style plugin power supply, and few bits and pieces for mounting the unit. 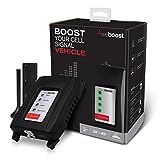 I was recently able to give the Sleek a good real world test in both the truck cab and inside our fifth wheel trailer. We were camped about 10 miles south of Newport, Oregon in an area with fringe Verizon coverage. Using the MiFi by itself we sometimes would get really weak 3G connections but generally, we suffered with 1XRTT. It was a perfect environment to test out the capabilities of the Sleek. I hooked up the unit and placed the MiFi in the cradle and within seconds, I had a couple extra bars and a nice increase in signal strength. Both inside the truck and the trailer the internet went from almost unusable to a solid 3G connection and even to 4G connection with 2 bars.

My Video Showing the Sleek Un-Boxed, Hooked up and Some Tests

When it comes to Boosting RV Internet the Wilson Sleek 4G does a good job, especially for the money. It was very simple to hook up and really a no brainer to operate. The only big drawback I can see is if you wanted to use it to boost a regular cell phone and use it to talk on. Because you need to place the phone in the cradle to have the signal boosted, you then need to use some sort of Bluetooth device to talk on. Wilson has a number of add-on accessories available and I have my eye on a few. First would be one of the permanent roof top antennas to mount on the RV, as this would increase the signal strength even more. Second the AC power supply so I can plug it in anywhere I like when on shore power and third the little Desk mount. I give the Wilson Sleek 4G a “Love Your RV” two thumbs up and look forward to returning to some of our favorite boondocking locations now armed with this little amp.

Note: this post is several years old now and the product is mostly discontinued, there are better ones to take it place. I plan to upgrade soon. – Ray 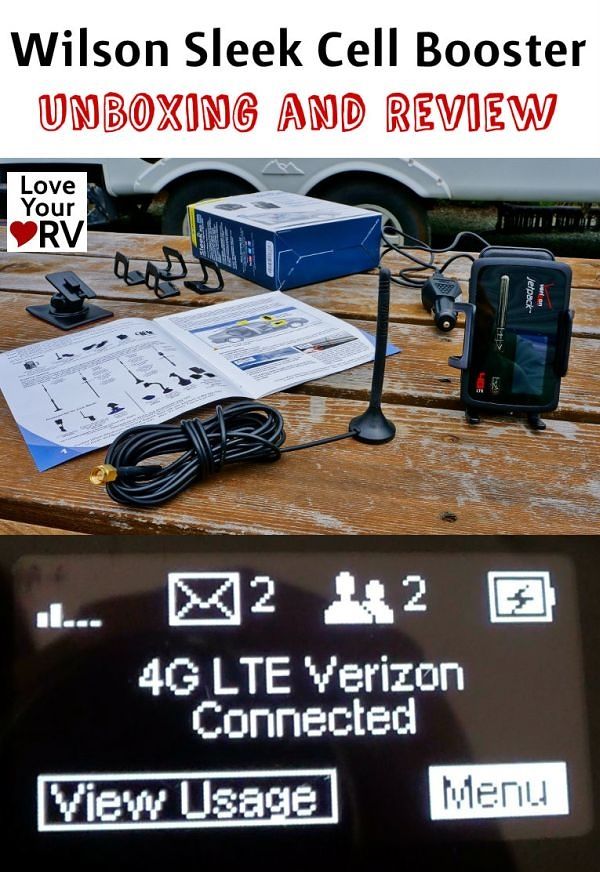