One Last Stop in the Desert

It was mid-April and we had time for one more boondock stop in the desert before heading for the coast and back up to BC. While exploring the incredible Alabama Hills BLM area last year I learned of another very bizarre landscape not far away called the Trona Pinnacles. I had marked it down for a future visit.

It would be a perfect place to cap off this snowbird seasons many south-west adventures. So we filled up our fresh water tank, topped up on propane in Barstow, California and headed north up highway 395 along the east side of the Sierra Nevada Mountains. 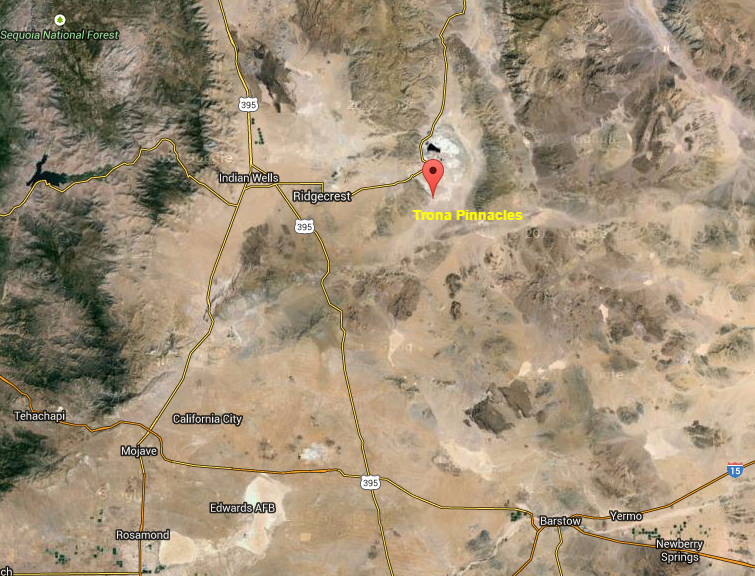 Getting to the Trona Pinnacles

Once we hit the town of Ridgecrest we turned east down the two lane paved state road 178 for maybe 15 or 20 miles until we came across the signs to enter the Trona Pinnacles BLM area. At this point, we could actually see the pinnacles off in the distance but were separated by a 5-mile stretch of gravel road. I had read that this road was a real bone shaker with lots of washboard areas, so we carefully made our way in with the trailer in tow.

Turns out it really wasn’t too bad at all washboard wise, nice and flat for the most part. I guess the winter rains had softened it up and the road was recently graded. It was such a cool site driving in seeing the Trona Pinnacles getting bigger and bigger as they jutted up out the stark and barren terrain. What an unworldly looking place! 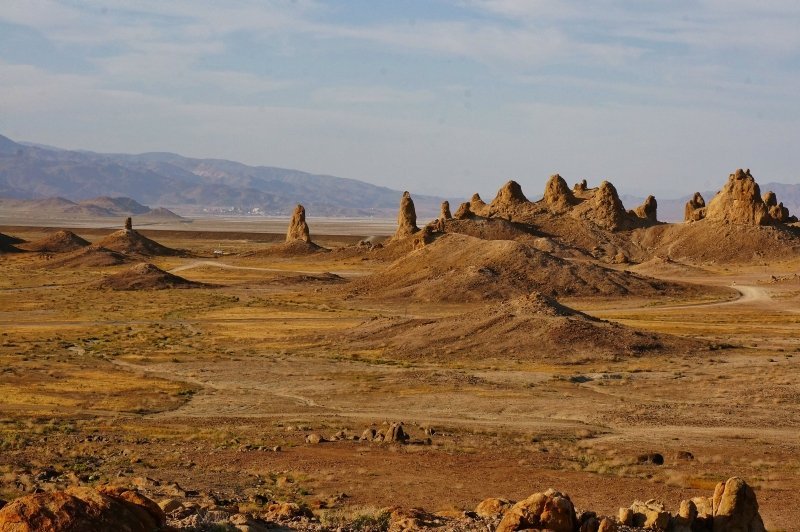 Camping at the Trona Pinnacles

There are no marked campsites; you just find yourself a flat area and setup. The only amenity is a vault toilet and it is “pack it in pack it out” for your garbage. I spotted some really cool camping areas in among the pinnacles along what they call the “scenic” drive. But, it gets pretty lumpy and traverses some loose sandy washes (4×4 recommended) so I decided to not risk towing too far in.

We set up camp in a large flat area near the main entrance to the hiking trails. Anne thought it may get crowded once the weekend hit but not many other campers actually showed. Other than some occasional day trippers we had this large area to ourselves. 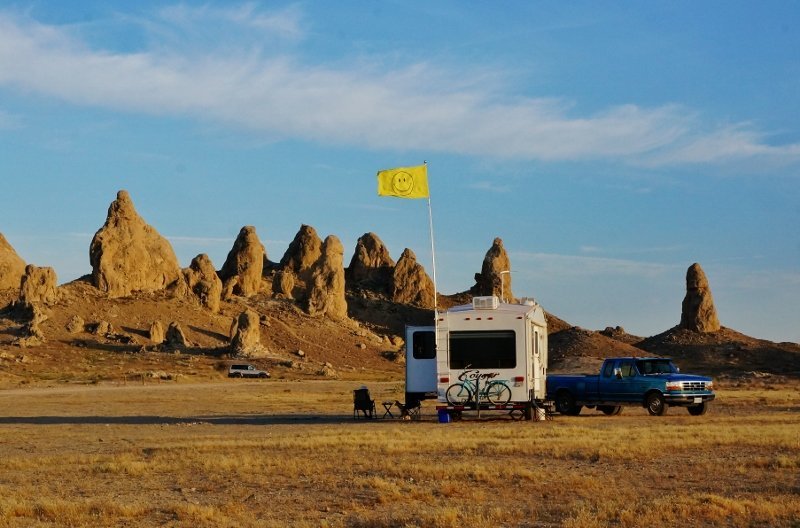 Even though it was only April the day time temps got quite hot, cracking 90 degrees a couple times. I can’t even imagine what it must be like in the middle of summer here. Even though it seems like such a dry, barren and inhospitable location there was still evidence of wildlife. The most striking being thousands of butterflies. What? Butterflies? It was the weirdest thing but true. The little bit if grassland there was had flowered and was covered in butterflies. Another inhabitant of the area is the Sidewinder Rattlesnake which we kept a sharp eye out for but never saw. 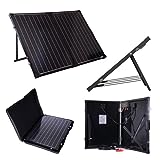 The Trona Pinnacles are tufas made of calcium carbonate and formed when this area was underwater in a huge lake thousands of years ago. The unique formations have been featured in many movies, usually as an alien planet in space flicks like Star Trek and Planet of the Apes. I think what makes them so interesting looking is the miles and miles of flat featureless desert surrounding them. They seem to jut up out of nowhere creating an extremely unique scene. To me, some looked like statues, like those on Easter Island. 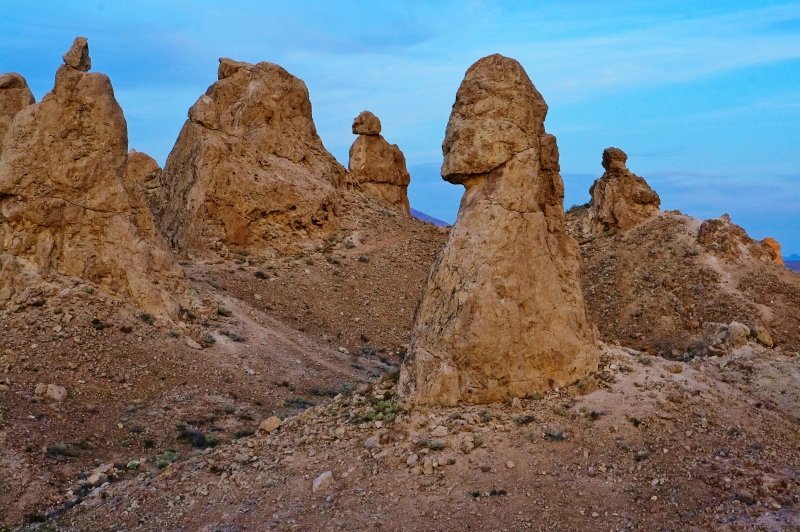 The northern group is the youngest at 11,000 to 25,000 years old. These are the best examples of what are known as tufa towers. The northern group also include shapes called tombstones, ridges and cones. The small middle group claims only 100 spires, but boasts the tallest “tower”, rising 140 feet (43 m). The southern group, includes 200 tufa formations aged 32,000 to 100,000 years old – http://en.wikipedia.org/wiki/Trona_Pinnacles

The best time to explore the Trona Pinnacles for us was late in the day as the sun began to set. As the heat of the day subsided we would grab our cameras and hike out into the pinnacles capturing them as they cast shadows and glowed in the low light. Later as darkness fell it would get a little spooky. I half expected a green alien to pop out. We really enjoyed our short stay and plan to return again when the weather is a little cooler for some more extensive hiking and exploration of the place. I just loved the peacefulness out there.

Video Clips from our Stay at Trona Pinnacles

Follow our RV adventures! Sign up for the free monthly Love Your RV Newsletter – Receive the eBook “Tips for the RV Life” as a gift. Also head on over to the Love Your RV Forum and chat with me and other RVers about all things RV. Join our boondocking group. 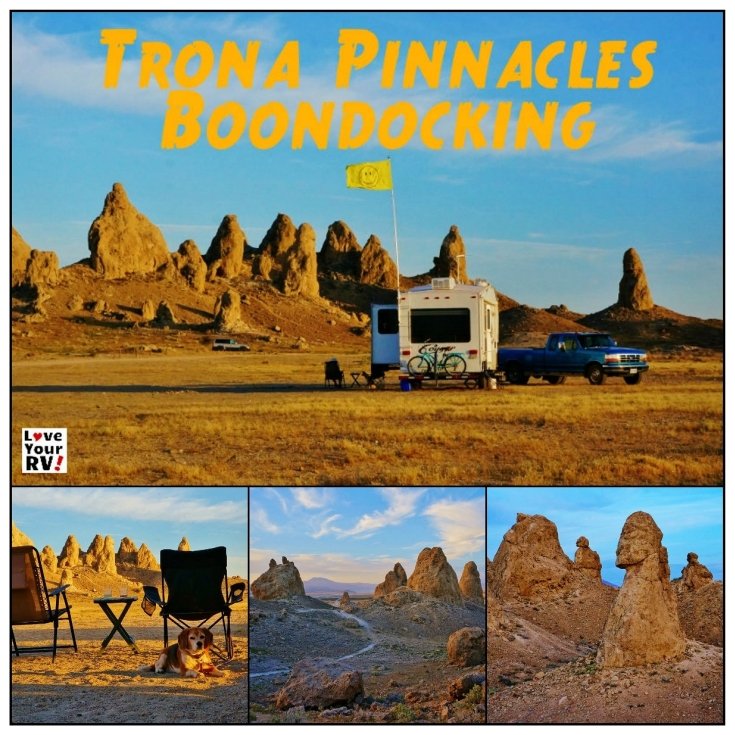