We love to travel the Southwest US during the winter. Camping out on BLM land, exploring wildlife refuges and State/National parks. This means camping off the grid without electrical hookups. Some sort of boondocking power system is essential if we want to camp more than a couple days.

We started out using a 2000 watt Champion generator to keep our batteries charged. It worked fine but even being a quiet inverter style unit it still had an annoying drone and needed to be filled routinely with fuel. At 48 lbs it’s also not the lightest thing to move around.

About a year and a half ago I decided to install some solar panels and build up a decent boondocking power system for our Cougar fifth wheel trailer. Since we are full-time RVers and need to be frugal to keep it that way I had to build slowly. I added pieces and made improvements as I could afford them. 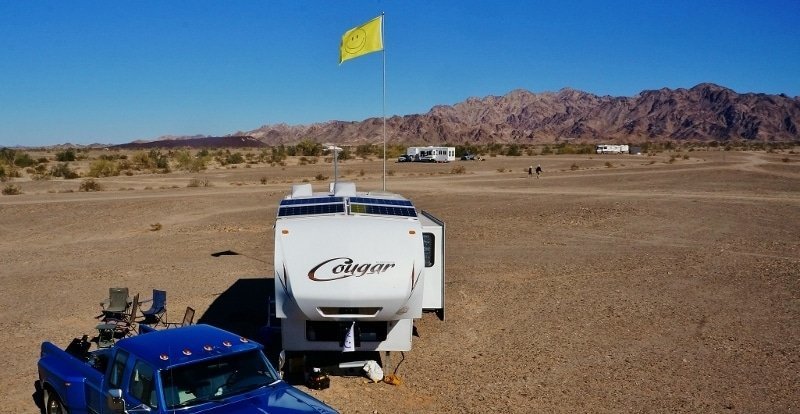 If you have followed the blog for a while, you’ve likely seen some of these upgrades. Up until now, they have been published as a string of separate posts and videos. Now that I feel I have my off grid RV power system complete I’m putting out a detailed overview of the system, the components used and how much they cost. Luckily for me, labor was free as I did all the work myself with the odd bit of help from friends.

Disclaimer: Working with electricity can be dangerous. Performing the modifications detailed in this blog posting may void your warranty. The following is for educational and entertainment purposes only and should not be taken as instructional. If you decide to do the same modifications I’ve done then research and beware of the risks involved. I accept no liability. You have been warned! – Ray

Click the Headings or Photos for more in-depth installation info on each.

The heart of any RV boondocking system is the battery bank. I chose to go with a tried and true power source. Four big 6-volt lead acid batteries with a total capacity of 464 amp hours. Although they require extra maintenance versus other types plus good ventilation, I find them to be a great bang for my buck. Maintenance isn’t a problem for me, and the trailer’s front storage compartment, where I’ve installed the battery bank, has abundant fresh air flow. 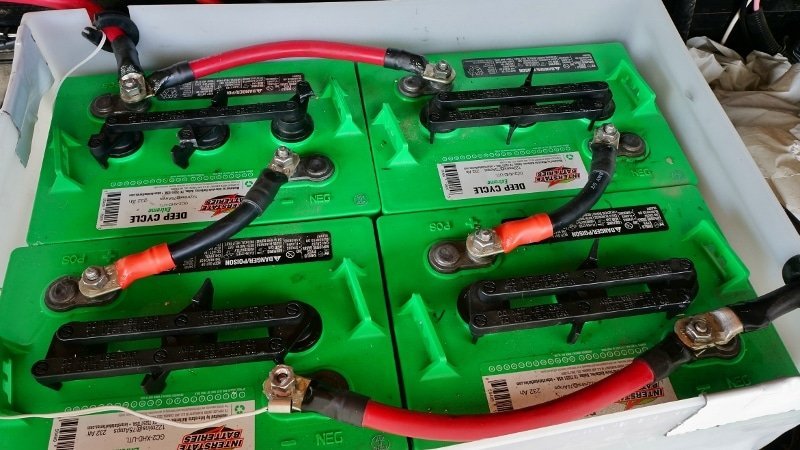 I found the plastic box to house the batteries at a local marine parts store. It fit the compartment floor width perfectly and came with a lid, and the wire holes precut. I just had to add ventilation holes to the bottom and top of the battery box.

Next, to keep tabs on my power bank, I installed a sophisticated battery monitor. I picked a well thought of unit from Bogart Engineering called the Trimetric TM2030-RV. The Trimetric keeps a record of the current flowing into and out of the batteries and monitors the precise voltage of the bank. Then it calculates the percentage of charge left.

I’d advise a battery monitor as one of the first upgrades to make. It will give you an idea of your daily power usage so you can figure out how much solar will be required when the time comes.

All boondockers need a power inverter if they want to run any items that use 120 volt AC power. Like things you would plug into a regular household power outlet. We decided on a 1000 watt unit as our AC power demands were relatively meager compared to others.

We don’t usually run any high wattage items such as the coffee maker, microwave or toaster when boondocked. If we ever do desire to use those, I’ll fire the portable gas generator for the brief task. 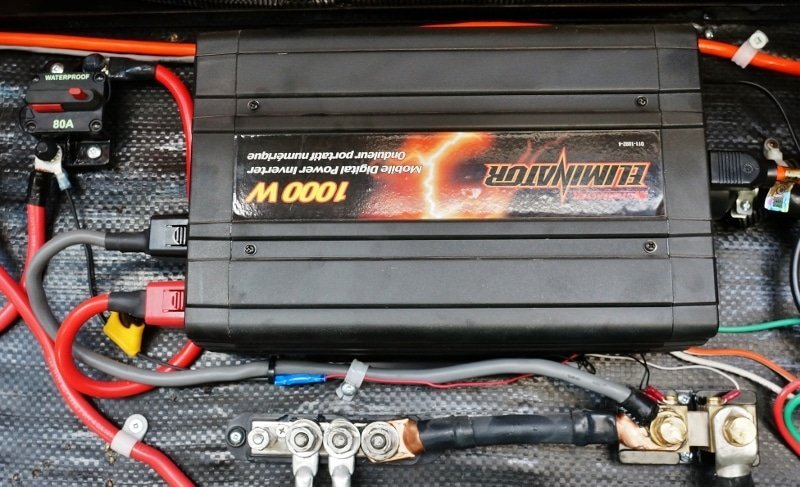 The cost was a significant consideration. The difference between a 2000 watt inverter and a 1000 watt unit is substantial. We did spend the extra dollars for a “pure sine wave” inverter because it would be powering our sensitive electronics. My name would be mud if I blew up my wife’s iMac. 😉

I started out with a 200 watt Renogy solar kit to get my feet wet. It proved to be a decent little system, especially for the money spent. If we avoided using our 43″ TV and Anne’s 21″ computer we could get by, but a little more wattage would be nice. So, I added two more Renogy 100 watt panels on the Cougar’s roof last December and recently added a 100-watt remote ground panel. Yay!

With the 500 watts of solar panels, I’m now seeing 25-30 amps of current flowing into the batteries during peak sun hours. Should be plenty for our particular boondocking power needs.

You will hear many different opinions on charge controllers with most folks flat out stating that an MPPT controller is the only way to go. I guess I’m a bit of a contrarian and went with a PWM type unit from Bogart Engineering.

I believe it was the best way to spend my money. I envisioned my system staying in the smaller 400-500 watt range and being a tinkerer wanted full control over the way the solar controller charged my battery bank. IMHO the SC2030 controller when mated with the companion Trimetric monitor, fits the bill perfectly for me.

Solar power is incredible, and I love it, but unfortunately, the sun doesn’t always shine. Get too many cloudy, dry camping days in a row and even our large battery bank runs down. Then, out comes the gas generator to top up it up.

Once I had installed the Trimetric battery monitor, I quickly realized how pathetic the OEM converter was at recharging the batteries. It was taking forever, wasting my time and fuel, not to mention the extended periods of noise pollution. It would start at a relatively high charge rate but would quickly drop, petering along at a rate that took hours and hours to get the bank properly charged. 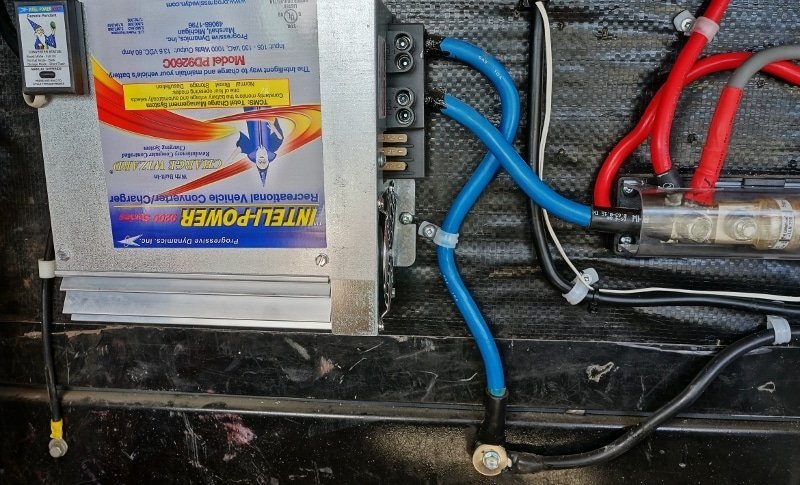 As an upgrade, I bought myself a high-quality converter charger in the form of the InteliPower PD9260CV. I installed it right beside my batteries and connected it with large one gauge wires. It does a night and day better charge job than the cheap OEM converter located far away in my rigs kitchen. It boils down to 2 – 3 times less generator run time.

I performed a side by side comparison one day when the battery bank was quite run down. The OEM unit was putting out ten amps, while the InteliPower was putting out over thirty!

Using large gauge wires with quality fuses, breakers, and connectors is vital to get maximum performance from your boondocking power system. Wherever I could, I kept the cable runs as short as possible. There are online wire loss calculators that helped me figure out how thick the wire gauge needed to be for a certain distance.

The cables are a combination of (off the shelf) premade and custom built to length by a friend.  I treated all the connection points with Ox-Gard Anti-Oxidant Compound before connecting and Permatex dielectric grease afterward to ensure against corrosion.

For circuit protection and convenience I used several waterproof switchable breakers. I have 40 amp breakers on either side of the solar charge controller, an 80 amp breaker to the inverter and a battery disconnect switch to the main RV 12 volt circuits.

They are extremely handy when I need to work on a particular section of my 12-volt power system. Moreover, I can easily shut down the whole system if required. Disconnection may be desirable during a lightning storm or if the RV goes into storage. 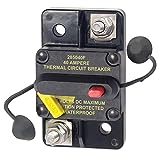 Because I wired the solar panels in parallel vs. series, I added an inline fuse on the positive wire to each one, just in case one of them shorts out. In that unlikely event, it could be possible for the other four to produce enough amperage to cause an overheating condition and worse case scenario a fire. I added a 10 amp fuse on each panels positive line to prevent this.

More info at this external reference: How to properly fuse a solar PV system by WindyNation.com

As a final failsafe I added in what’s called a “catastrophic fuse” right near the battery banks positive output. This large 250 amp fuse is there just in case some major meltdown happens to the 12 volt DC power system. Hopefully, it blows before the RV burns down! 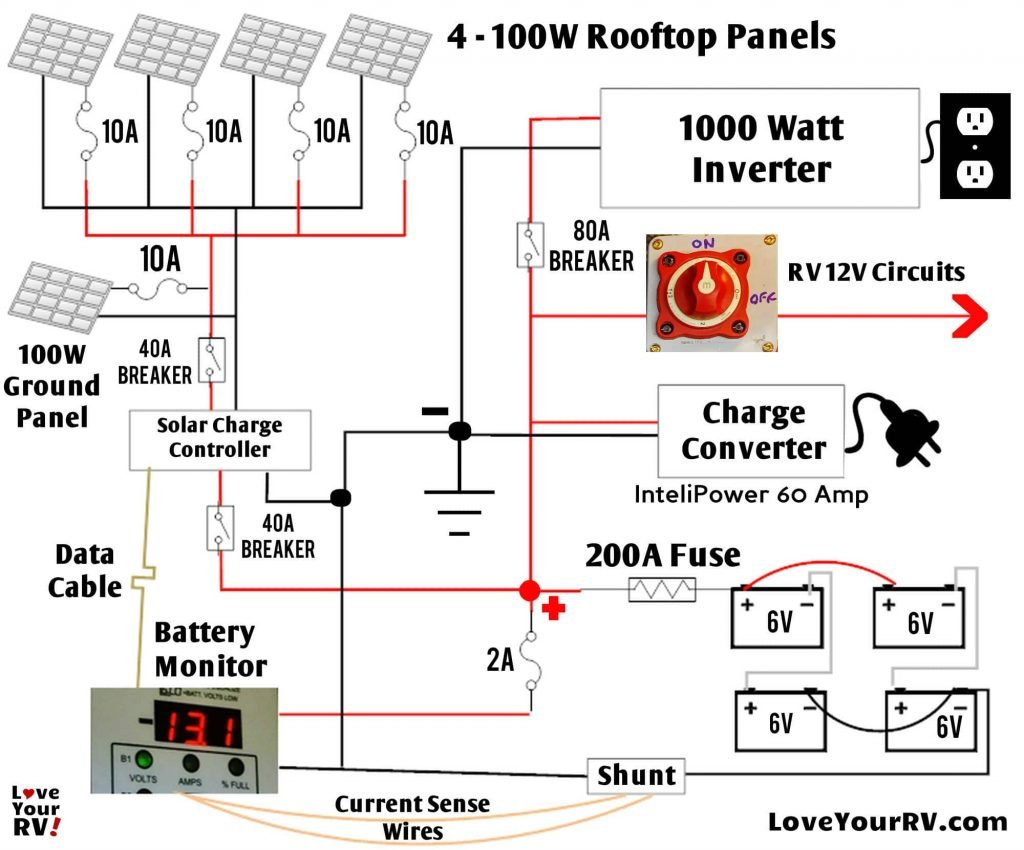 Total Parts = $2,766   Note: All parts were purchased by myself except for the Lenun solar panel which I received as a free promo for the review. A few other odds and ends were donated by fellow RVer friends. 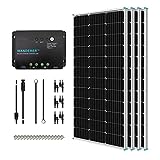 I believe I’ve been able to strike a pretty good balance between and cost, performance, and quality with this boondocking power system. I know of course the payback time of solar versus continuing to use our already “paid for” gas generator will take to take many years. Especially, considering the recent low fuel price.

However, for us, it’s well worth the lifestyle benefits. It’s so nice to be off grid enjoying a beautiful remote landscape while the solar system quietly replenishes our batteries. Or to be able to keep the peace camped amongst tent campers in a National or State Park setting.  Or to spend a few days pavement camping at a casino without worrying about pulling out the generator. 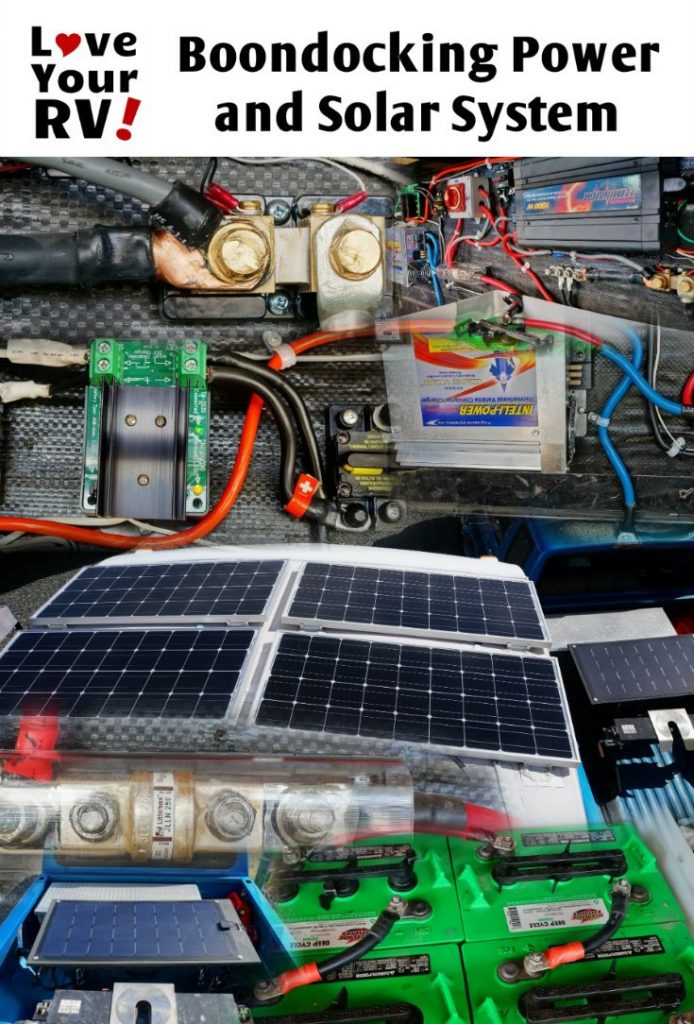