While in the Valley of Fire State Park area our new friend Don suggested a trip to see an interesting place called Whitney Pocket. Our trip led us off Interstate 15 near the town of Mesquite, NV and on to the Gold Butte Back Country Byway.

Once we turned onto the Gold Butte Back Country Byway at Riverside the old lumpy pavement road meandered alongside the Virgin river for a time and then began its climb up towards the Virgin mountains. Once we got up in elevation Joshua Trees began to dot the landscape and the views became more impressive of the valley, surrounding mountains and Lake Mead in the distance. Lucky for us at this time of year the Joshua Trees helped by some spring rains were having a spectacular bloom! 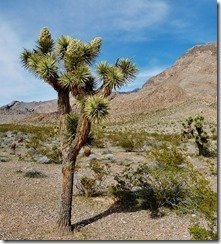 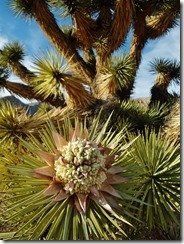 After about 25 miles we arrived at the area known as Whitney Pocket. Here we found a bunch of interesting rock outcroppings with colors like Valley of Fire. One big difference though was the presence of beautiful Joshua Trees. Around the outcroppings were several flat areas suitable for boondocking and we saw several campers taking advantage of the beautiful surroundings.

Hiking around the area we found more of the cool mauve,gold and red sandstone formations with neat little arches and windows. It was a gorgeous spring day with temps in the 80s . The blue sky contrasted so well with the colored rock and green Joshua Trees. Anne was in photographers heaven.

In a small canyon area nearby are remnants of an old CCC (Civilian Conservation Corps) built dam. I climbed up on the nearby sandstone hill and took a shot of Anne standing on it to give some scale. The area is loaded with other CCC artifacts, along with native petroglyphs and evidence of their civilization. We were on just a little day trip so had limited time, but want to return and dry camp in the area so I can really explore it.

After exploring around Whitney Pocket and adding it to our list as a prime boondocking location to return too we headed even deeper into the back country to find an area called Little Finland. The journey took around an hour or so from Whitney Pocket on 4×4 type dirt road and unfortunately we arrived just after sunset but still was worth the drive. It was a bizarre red sandstone landscape with intricate sculpted sandstone figures, formations and a spring oozing out of the rock. There were even palm trees which appeared to grow right out of the sandstone cliffs. Wish we had arrived earlier so the photos would have turned out better, will have to make a return trip someday. If you head there make sure to add some extra time as it is slow going on the bumpy narrow dirt road in and out.

Probably the most fascinating thing about this place is the fantasyland of shapes—almost every rock appears to be an animal, face, or mythical creature. Mixed in with the intricate red rock sculptures are fields of virtually white sandstone with sinuous waves, remnants of ancient sand dunes. In other places, the rock is covered with a thin white crust—salt that has crystallized out of groundwater running through the rock.

If you like boondocking away from the crowds in a spectacular site this area is for you. There are many great free dispersed camping areas along the byway the most popular being Whitney Pocket. The road is fairly rough but paved and decent enough to take a trailer if you go slow, but after Whitney Pocket it’s gravel and proceeds to get rougher and rougher. Little Finland is a unique camp spot but a 4×4 would be recommended.