For the last little while our RV shower fixtures have been acting up. The cold tap has been really wonky. We have to really play around with it to get a constant stream which makes adjusting for good pressure and temperature a real pain. Also the cheapie shower head has never really been that great. Now that we are stationary for a few months I’ve been tackling some repairs and upgrades to the fifth wheel and new RV shower fixtures is high on the list. I’ve always heard other RVers singing the praises of the Oxygenics brand of shower heads so decided to order myself one and give it a try. As for the faucet I picked out a nice looking unit with ¼ turn taps on it instead of the multiple turn type we currently have. 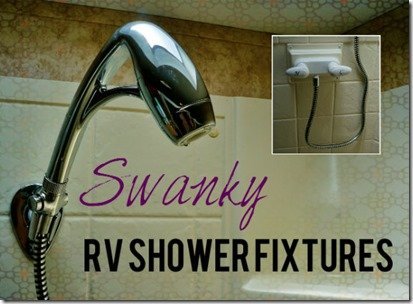 The new faucet arrived first so I went to work replacing it. On most RVs there is an access panel behind the shower area to get to the plumbing, but unfortunately on our Keystone Cougar fifth wheel that is where a pocket door lives. So this made the shower faucet change a little more of a challenge. Four screws and off came the faucet and its mounting plate but it barely would move away from the wall. Hmmm…. I headed into the basement storage area and checked out things below finding where the pipes came from. I had a couple options. I could disconnect the plastic plumbing pipe below and pull out plenty of slack up top or push up a bit of the extra piping slack that was available below and try to do the job without disconnecting anything downstairs. Preferring to not disconnect anything below I managed to swap out out the faucet. It was a little tricky and more time consuming but doable. I figure the less I have to undo and re-tighten any of the plastic pipes the better. 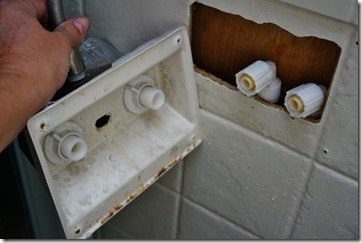 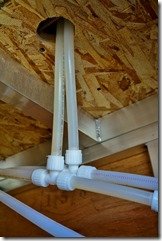 After I had all the plumbing reconnected on the new faucet I ran a new bead of silicone rubber sealant all around the seams and tested it out. Once it was back sealed in place there was no way to monitor for leaks so I placed some paper towel down below. If it was leaking it would run down the plumbing pipe and wet the towel. This was a good way to check for even a small leak. We’ve used the new quarter turn shower faucet for the last week while waiting for the new Oxygenics shower head to arrive. The new taps work great, nice and smooth and they make it a lot easier to regulate the water temperature compared to the old multiple turn ones. 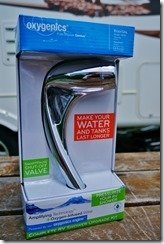 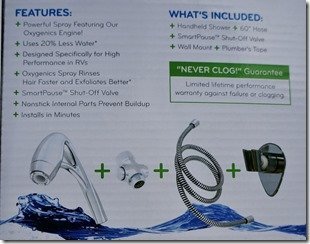 Yesterday I received the new Oxygenics replacement RV shower head and was excited to get it installed. The kit came complete with the shower head, 60 inches of hose, a nice swivel ball mount, a shutoff valve and some odds and ends for the install. Although made with plastic the unit has a really nice feel to it. The install was pretty straight forward. First I removed the old holder and then with the supplied screws I attached the new holder in the same place. I noticed when doing so that Keystone had mounted the holder with no sealant! Well that area gets a fair amount of water and the screws and screw holes were rusty telling me water was getting in there. For my holder install I laid down a bead of silicone to prevent this. Next I assembled the shower head parts using supplied washers and white Teflon tape and tested for leaks. Everything went smoothly and the shower was ready to go. Of course I had to give it a try right away and I can report it was fantastic. I’m really pleased with the new RV shower fixtures and wish I upgraded them long ago. 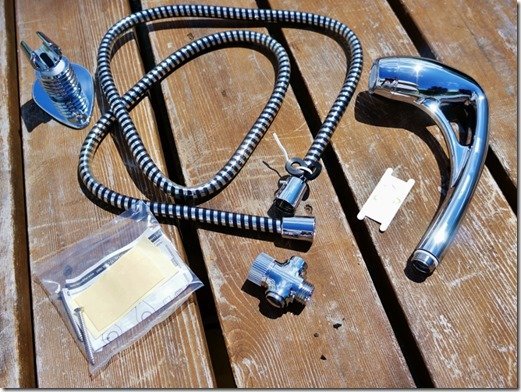 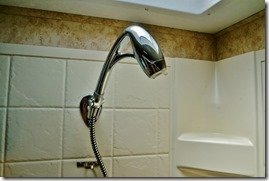 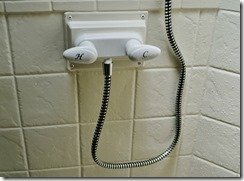 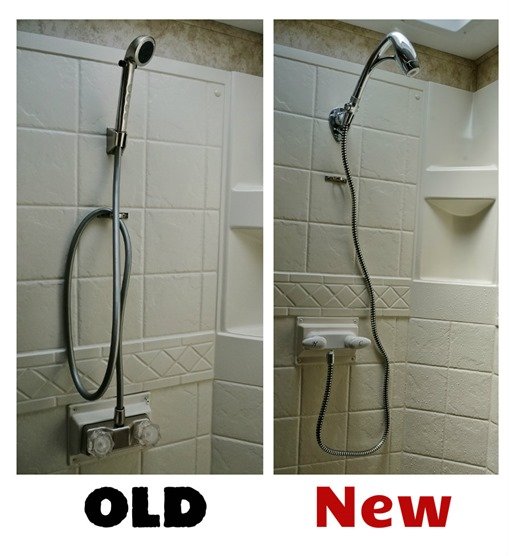 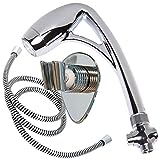 If I knew then what I know now the Oxygenics Shower head would have been one of my first upgrades I made to our trailer. After all we full time in our unit and use the shower almost every day. For the price it’s a no brainer upgrade.