Two years ago around this time, we camped at a unique little state park north of Deming, New Mexico called the City of Rocks. While enjoying the beautiful high desert scenery, several other campers told us about another New Mexico state park to the south called Rock Hound State Park. They gave it an emphatic thumbs up.

Unfortunately, our schedule was tight as we were trying to make serious miles on our way to visit Big Bend Ranch State Park in Texas, so another time maybe. Well, this snowbird season saw us once again in southern New Mexico with Rock Hound SP on the todo list. 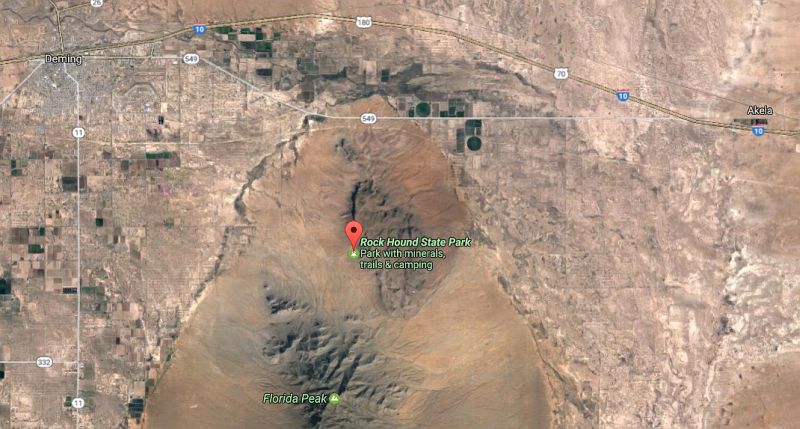 Rolling in With No Reservation

A few days before arriving I looked at reserving a spot, but honestly, IMHO the reservation site is awful. The have farmed out the handling of it to Reserve America. I can’t stand their interface, plus they charge 12 bucks. We decided just to wing it knowing that a fair number of campsites are “first come first serve.”

As we drove towards the park entrance, we got excited by the view, a couple of loops of campsites nestled against the mountainside covered with cactus. Cool!! The place was kind of jammed, but a helpful volunteer host lady showed up quickly to sort out a spot for us. There were a few water and electric ($14) available or several dry camping sites ($10). We went with the dry camping. 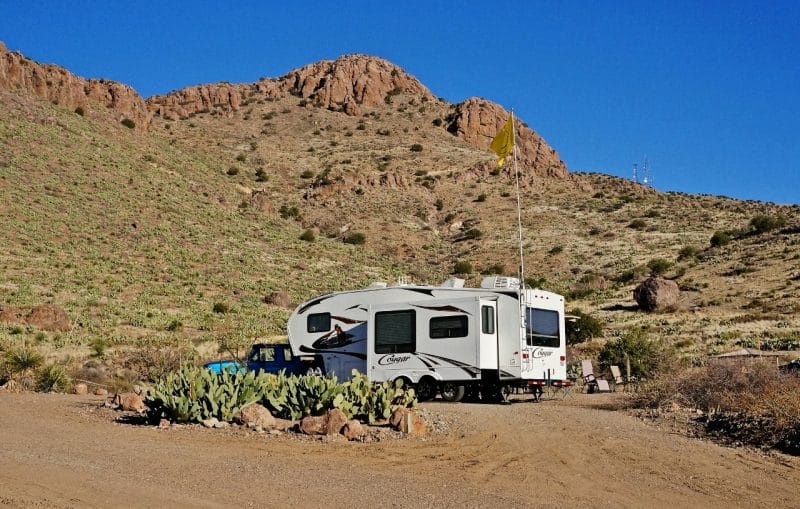 The park is small and popular as you would imagine being only 15-20 minutes off Interstate 10. I give the staff kudos for accommodating folks. I noticed they would utilize the group camping, day use picnic areas, and even a parking area near the visitor center as overflow for late arrivals.

Rock Hound State Park lives up to its name, visitors are encouraged to take home rock samples up to 15lbs worth. This worked out perfect for us since my wife Anne has been on the lookout for rocks to take back home for her brother. He is into rock polishing. Enough said the rig was a bit heavier when we left. 🙂 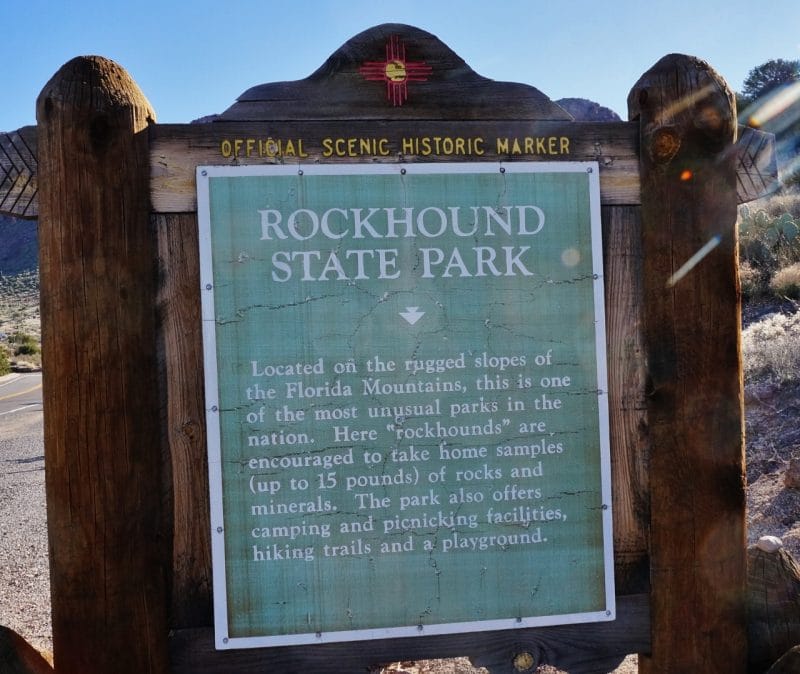 A highlight for me was the prickly pear cactus fields covering the hillsides. I’ve never seen prickly pears so densely packed. I imagine when they flower it must be a sight to behold. Another feature of the park I enjoyed was a pair of trails running up and along the surrounding mountain sides. They afforded terrific views of the campground below and distant vistas including the Florida Mountains to the south. 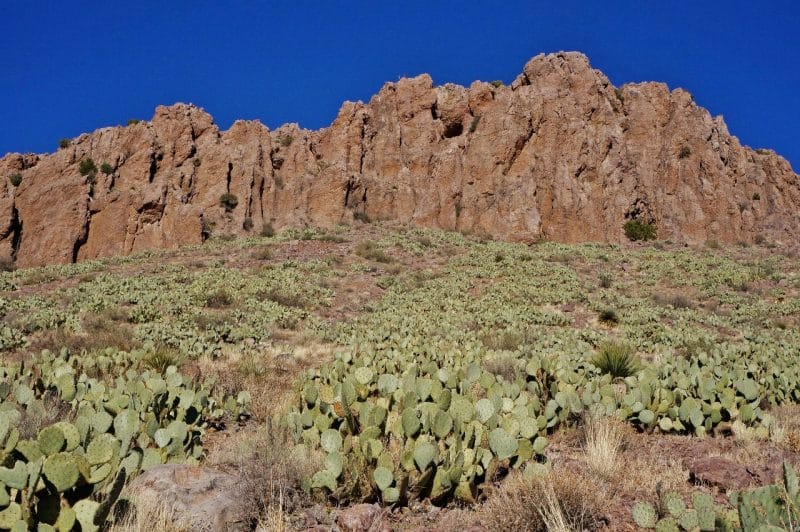 As far as amenities go the park has restrooms with water, showers, small visitor center, and dump station plus potable water fill. The campsites are large and spread out each containing a metal picnic table and shelter on a cement pad, plus a fire ring with grill. Top notch, especially considering the cost.

I found the overall atmosphere peaceful and relaxing, and the views were killer. Only negative thing to say was one day the wind kicked up and blew strong all day, causing a minor dust storm. It made it a little uncomfortable breathing wise. The sunset that night was interesting, though. 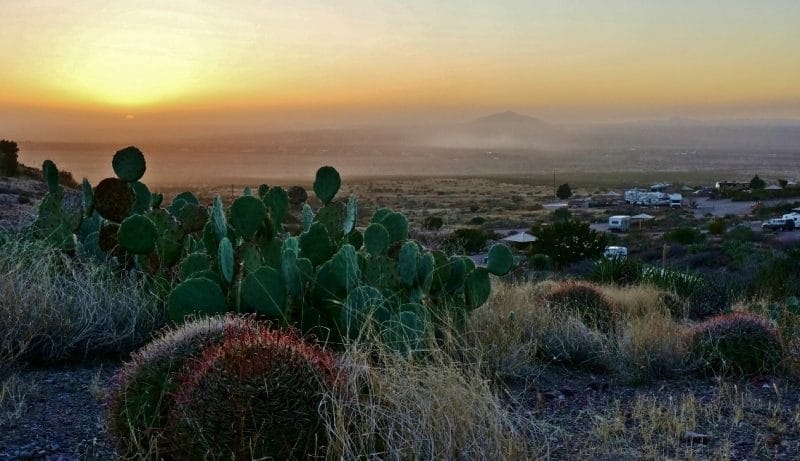 We spent five days camped at Rock Hound and thoroughly enjoyed the views, hiking and scouting out cool rocks. We also had the pleasure to meet up and socialize with several other RVers who follow our blogs and recognized the rig. Fun times! 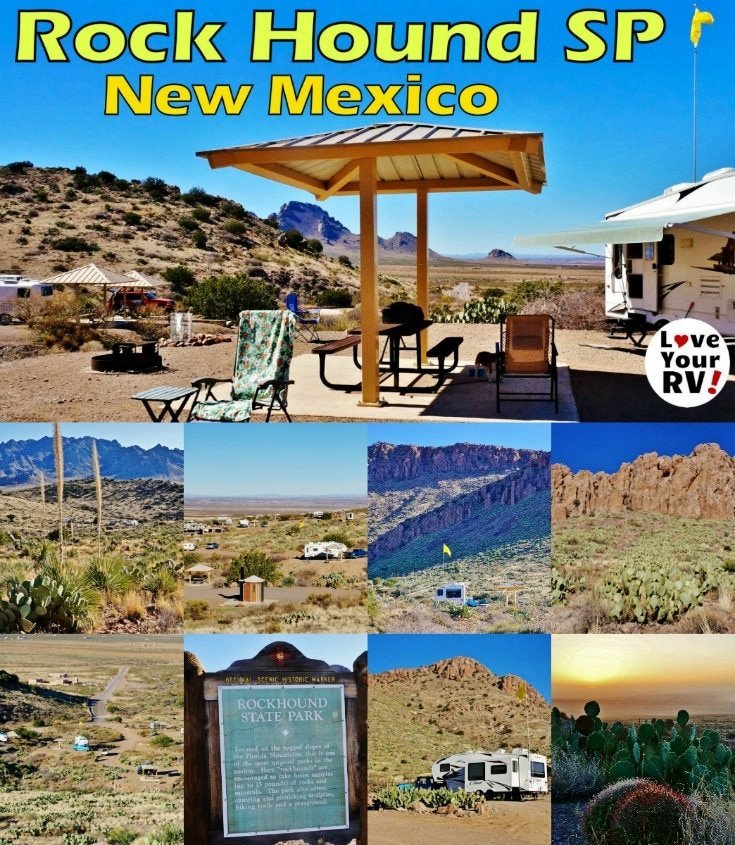