A little while ago when running some wiring to install a headphone jack in the Cougar I decided to have a peek inside all areas of the underbelly. As I inspected the area where the gray and black tank valves are located I noticed the black tank valve was developing a crack near the end piece housing the pull rod. I feel pretty lucky that I noticed it since the Keystone Cougar 276RLS has an enclosed underbelly pan. If this had started to drip who knows how long it would have taken until I found out about it. It could have created a black water mess to clean up. Yuck! 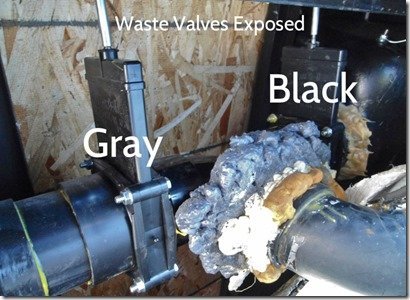 First order of business was to drain the tanks and give the black tank a good flushing before unbolting the valve. The cleaner the tanks discharge the better for me working underneath the trailer. The valves are secured in place by 4 – 7/16ths inch nuts and bolts. I undid the black tank valve bolts and soon discovered my first problem. The valve would spin around but no way was it going to slide out. There are ridges from the opposing ABS connections holding it in place. Keystone in all there engineering wisdom had placed the black and gray valves sandwiched between the two tanks and then glued all the piping together. This is a great plan until a valve needs changing! Arrgghhh! 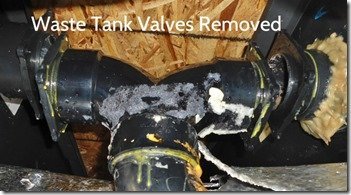 I proceeded to unbolt the gray valve as well and by twisting and wrestling with the piping was able to remove both valves. Inspecting the two waste tank valves revealed a definite crack in the black tank one, The gray tank valve was in great shape. I believe the cracking is caused by the black tank valve being more prone to sticking, so I end up being a little more abusive to it than the grays. I hit the RV parts store and picked up an exact match replacement kit by the manufacture Bristol. Also at a local hardware store I acquired some plumbers grease to lube the rubber gaskets before reassembly. 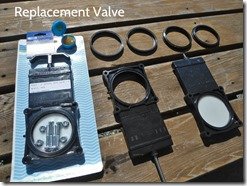 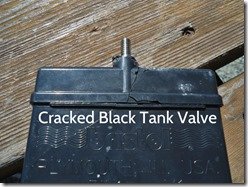 OK, now we hit problem number two, trying to reassemble the two valves and piping in place with basically no extra clearance between them. If I angled the piping just right I could slide it all in place but every time one or two of the rubber seal rings would dislodge and of course the valve would leak. I tried several times and wasted most of my afternoon hoping everything would go together properly. No such luck. Tired of laying on my back wrestling with this mess, while having smelly water dripping on me, I decided to call it a day. After sleeping on it , I tackled the problem fresh the next morning. I had a plan! I remembered installing a washing machine drain in the past and using a rubber coupler to join the ABS plastic piping to the house’s iron drain pipe. So my plan was to cut out a small section of the gray tanks drain piping and install such a coupler. This would give me enough flexibility during reassembly to be able to correctly install the waste tanks valves and keep their gaskets seated. Off to the hardware store again. 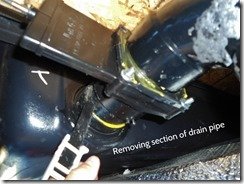 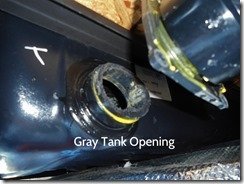 I picked up a 3 inch rubber coupler which included two hose ring clamps and a keyhole saw. I cut out about an inch and half of material from the gray tank drain pipe. Success! This allowed me to gain just enough clearance between the waste tanks valves and the drain piping to install everything properly into place.

I filled up the tanks and gave the system a test with full dumping pressure and no leaks. Yay!  Hopefully this article can help someone tacking a similar job. 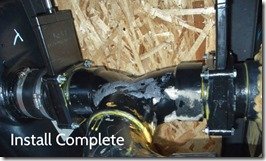 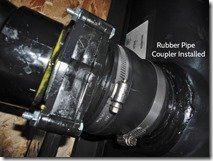 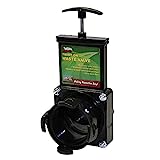