The Salton Sea Calls Us

After boondocking in Anza-Borrego for a week we headed to a favorite casino called the Red Earth Casino. We like it because it has everything a boondocker needs after a stint out in the desert. They provide free sani-dumps, fresh water and overnight RV parking. Also it usually has the cheapest diesel in the area, propane, a little café, and penny slots! The next morning the plan was to drive up to Joshau Tree NP but as I gazed across the nearby Salton Sea plans, as when you are nomadic with no fixed schedule often do, changed. 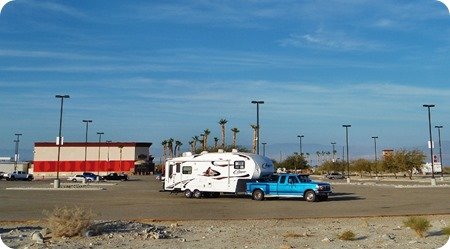 Last year we had made a quick stop at the Salton Sea State Recreation Area and stayed in the main campground on full hookups. It had a beautiful view and many types of bird life including, odd for the desert landscape, pelicans. This time Anne and I decided to check out the dry camping areas further down the coastline and settled on one called Corvina Beach. Corvina Beach is a roughly a one mile strip of level ground along the Salton Sea. We pulled in and were greeted by a nice volunteer camp host, paid our 10 dollar a night fee and picked out a nice spot. There were only 4-5 rigs there so we were well away for our neighbors. A quick scan of the facilities showed a surprising amount of conveniences for a primitive campsite. Corvina Beach has fresh water, garbage, picnic tables; metal shades and get this free showers! Seems this beach is used by kayakers for a launch point and I guess they need to shower off after kayaking in the briny salt waters of the Salton Sea. The entire facilities look very new with fresh paint and gleaming stainless steel fixtures in the bathroom/showers. Note: showers are wheelchair friendly as well. 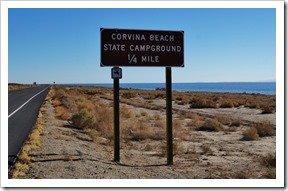 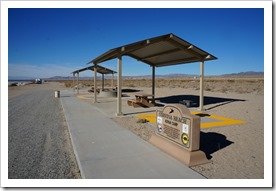 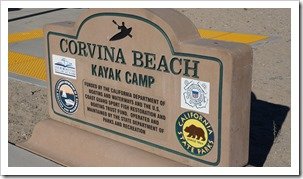 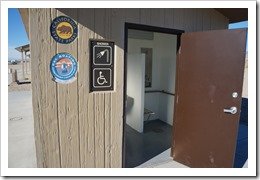 The Beach and the Birds

The Salton Sea is a very unique place. It’s a large briny salty lake smack in the middle of the California Desert. It actually shouldn’t even be here but is because of an accidental release of water from the Colorado River in 1905.

One of the world’s largest inland seas and lowest spots on earth at -227 below sea level, Salton Sea was re-created in 1905 when high spring flooding on the Colorado River crashed the canal gates leading into the developing Imperial Valley.  For the next 18 months the entire volume of the Colorado River rushed downward into the Salton Trough.  By the time engineers were finally able to stop the breaching water in 1907, the Salton Sea had been born at 45 miles long and 20 miles wide – equaling about 130 miles of shoreline.  Salton Sea State Recreation Area covers 14 miles of the northeastern shore and has long been a popular site for campers, boaters and anglers.  Increasing salinity in the Salton Sea basin has limited the number of types of fish that can be found there, and most fish currently caught are Tilapia. – http://www.parks.ca.gov/?page_id=639

Sometimes, if conditions are right, the Salton Sea smells really foul. For our visit in early January 2014 it smelled just like being beside a nice ocean beach. In fact looking at my photos you would assume it is a white coral sand beach in Florida but it is vastly different up close. The beach is mostly made up of millions and millions of barnacles! This is not a barefoot beach, not even sandals; good shoes are required to venture along the shore. Also there is a long strip running all along the shore containing thousands of dead dried up fish carcasses.

My Video Showing the Beach Up Close

All this is pretty gross but a juxtaposition to the dead fish is a plentiful supply of beautiful bird-life floating peacefully on the lake, a gorgeous desert backdrop and some of the prettiest sunsets out there. We spent a couple nice afternoons in our beach chairs watching the sunset with the silhouette of pelicans flying by in formation. Behind us were a set of train tracks and every half hour or so a big train loaded with box containers would rumble by. For some this may be annoying but for me it added to the ambiance of the location. I really like this little camp spot and recommend Salton Sea Camping on Corvina Beach highly for folks looking for an interesting spot to dry camp close to the Palm Springs area. So close we actually got 4G data service.

Here is a tip for when you are ready to leave. The camp receipt from Corvina Beach allows you free dump and fresh water fill access at the main park headquarters area where the full hookup sites and visitor center is located a few miles to the north. It’s a good dump site with plenty of room for any rig. Here are a few photos for you. 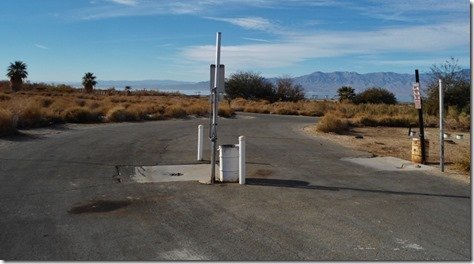 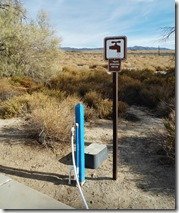 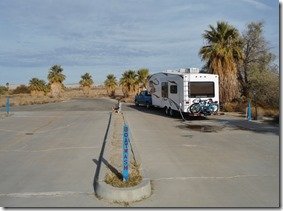 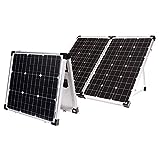 Follow our RV adventures! Sign up for the free monthly Love Your RV Newsletter – Receive the eBook “Tips for the RV Life” as a gift.