When we started our RVing adventure a couple years ago we set out initially on a one year trip around North America. One big reason we chose the RV as a mode of transportation was so we could bring our beloved furry companions with us. They are both beagles, a smaller younger one named Angie and an elderly larger one named Oscar. 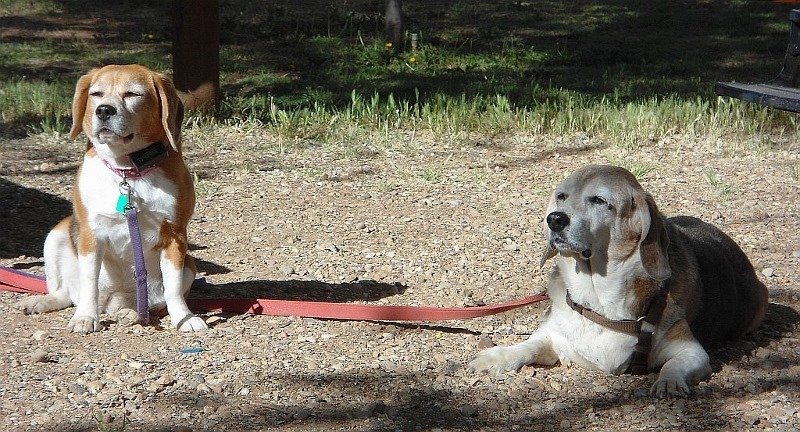 Angie being around 8 years old at the time was still very agile and full of spunk. She could easily climb the stairs into the fifth wheel, no problems. But Oscar, on the other hand, being a grand old man of 15 had some health issues that slowed him down quite a bit.

One ailment he had was a weakness in his rear hips and legs which made it extremely difficult for him to enter and exit the trailer. Even though I’m strong enough to lift his 45lb weight in and out, we had to be on constant watch in case he tried to exit by himself. Also, my wife has a weak back and could not lift him in and out by herself. At his advanced age, a tumble down the metal stairs wouldn’t be good. We needed a solution.

So we decided some sort of dog ramp was in order and checked out the pet supply places to find one. Many were either too heavy and unwieldy or flimsy and meant for tiny dogs. Finally, we found the perfect solution. It’s a combination plastic and aluminum ramp made by a company called Solvit who’s motto is “No Pet Left Behind”.

The ramp is about 3 feet long then slides out to a total of 6 feet in length. It weighs around 15 lbs. but can hold up to 400 lbs. It is very sturdy and could hold my 190 lb. weight no problem. The surface is covered with a sort of sandpaper like texture giving the dog a nice slip free surface to walk on. 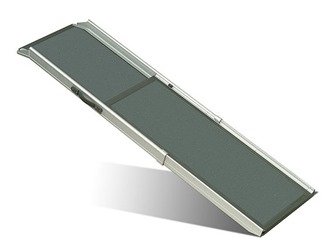 I highly recommend this product , we used it constantly for almost a full year traveling. I didn’t baby the ramp, it got stored in the back of the truck when traveling and saw a ton of weather. Being such a simple design, there wasn’t much to go wrong with it. Because it’s constructed of plastic and aluminum nothing corroded or rusted on it.

When we set up at a new RV site all I needed to do was extended it and lay the top onto the trailer stairs. There was no clips or fasteners involved, it was kept in place my gravity. We have the standard width access stairs on our trailer. The ramp is narrow enough that we could still have room to use the stairs normally and just leave the ramp in place. When breaking camp I just had to slide it back down to 3 feet and put it in the truck bed. Easy! 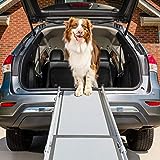 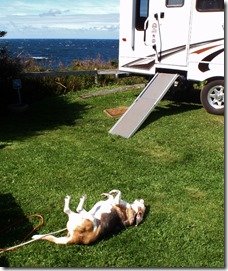 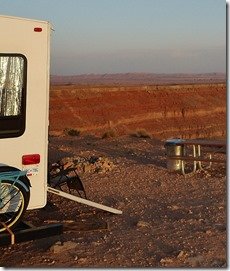 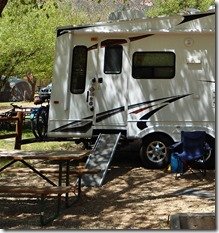 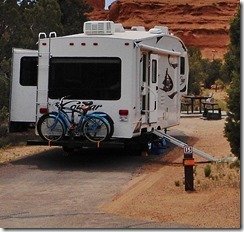 We did get some odd looks from other RVers as they tried to figure out what the ramp was for. Some thought we used it for a wheelchair. It was kinda funny, we started to get recognized because of the uniqueness of it. Folks would come up and say they saw us somewhere else because they remembered the ramp. Many other elderly dog owners were impressed and wanted to know where we got it.

The Solvit RV Dog ramp made things a lot easier and I’m sure Oscar liked the freedom to go in and out of the RV on his own. Unfortunately Big “O” is gone now but we know he had an awesome last year packed with adventure. RIP good buddy.