A few weeks ago while I was testing my RV holding tank capacities, I discovered two small cracks. One of the cracks is in the black waste tank and the other in my shower grey tank. Both are located right at the top of the tank at the rounded corners near my waste valves.

I figure the stress of pulling/pushing on often sticky valves over the years had caused the cracks. Either that or it was from traveling with full tanks over rough roads like we usually do when boondocking. Anyway, now that I had discovered the potential leak points they needed to be addressed before they became any larger.

I first priced out new tanks. They go for around $300 bucks and would be a hassle to change due to the topside input plumbing and vent pipes. Maybe there was a much less expensive way to repair/patch the old tanks. The cracks were still relatively thin at this point and only around 3-4 inches long. Seem a shame to gun the whole tank over them.

I decided to ask my YouTube Channel audience for advice and got numerous product recommendations and repair tips. (Thanks, folks!) Ideas ranged from plastic welding to gluing on ABS patches to topical applications like JB Weld, Liquid Nails, Flex Seal, etc. I ended up deciding to try out a chemical weld type solution called Plasti-Mend. Several people reported excellent success using the product.

Plasti-Mend is a specially formulated mix of plastic resins and solvents designed to repair ABS based RV holding tanks. These are usually the black ones you see used for gray and black water. Not the clear or whitish looking ones traditionally used for fresh water. They are Polyethylene plastic, and Plasti-Mend won’t work. From my limited research Polyethylene tanks need to be plastic welded to repair.

My gray and black RV waste tanks made by Ameri-Kart (Model HT 515 and HT 516). You can see from the website product description the tanks are ABS plastic. So, I was good to go and ordered up a Plasti-Mend kit. I chose the  Plasti-Mend Black Regular Repair Kit Product Code PMBRK. It goes for $38.39 plus shipping. Since I was ordering from Canada, I had to pay extra shipping fees and taxes.

I decided to order two kits, one for the current repairs and one to have on hand for any further plastic repairs I may need to do. Plasti-Mend can be used to repair several other types of plastics, so will be handy to have around the RV. My total costs ended up being 76.78 USD for the two kits plus USD 44.29 for the international UPS shipping plus 44.10 CAD for the import brokerage/duty fee and taxes.

What’s in the Repair Kit?

I opened the kit to find two tin cans and some odds and ends.  For preparing the surface, there is a scotch scrubber pad and a small 4 oz can of cleaner/primer solvent. A pint-sized can contains the Plasti-Mend. It looks like black goop with the consistency of liquid honey and includes chemicals like Methalyine Chloride and Methyl Ethyl Ketone. 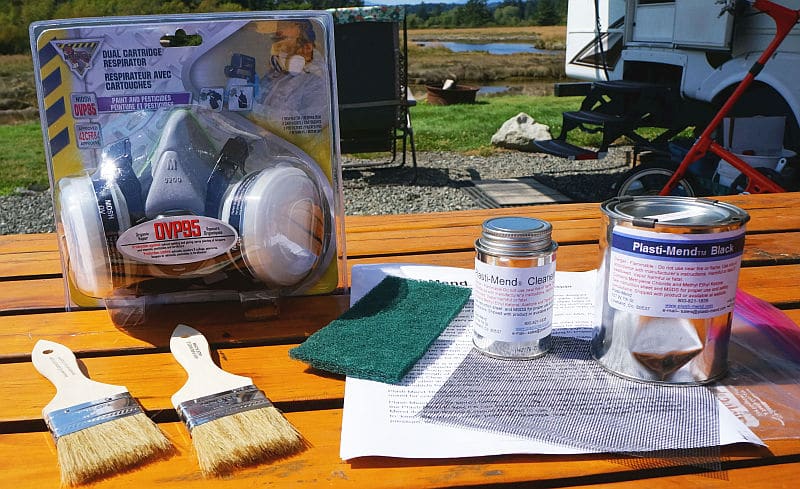 Also included are two cheap paint brushes and some mesh material plus detailed product information, instructions and safety notes. One particular section highlighted in red caught my attention. It stated, “Exposure to the solvents in Plasti-Mend without proper precautions can be damaging and even fatal.” They recommend using an organic vapor mask for protection when applying the product. To stay on the safe side, I picked myself up one and did the job on a day with a little breeze in the air.

Patching the Tank with Plasti-Mend

First thing I did was clean the whole area in and around the tank cracks with Simple Green Cleaner. I then used the included Scotch-Brite scrubber pad to rough up the ABS plastic surface.

After, I wipe the area with the supplied cleaner/primer liquid. It contains Methyl Ethyl Ketone, Acetone, and Tetrahydrofuran. It cleaned and melted a thin layer of the black ABS leaving black marks on my rag.

Once the Plasti-Mend patch had dried entirely a few days later, I tried filling the waste tanks. No leaks! I have to say I’m pleased with the repair; it was an inexpensive, easy fix for the cracked waste tanks. I’m glad I didn’t need to pull the tanks and hope the repair will last. I’ll come back with an update in a few months and let you know how the fix holds up.

*UPDATE* – my first repair attempt using the Plasti-Mend product has failed. Will give it another try. – https://www.loveyourrv.com/20-more-rv-product-review-and-repair-updates/