We drove from PEI to Cape Breton and aside from the main TransCanada Hwy the roads are horrible. They have nasty potholes, cracks and heaves, poor Cougar, our trailer. One cabinet door came unhinged and most of Anne’s undies were on the bedroom floor. Spent a few hours tightening and checking screws and bolts after our scenic side road adventure.

Cape Breton is beautiful of course, but not as impressive as I thought it would be. I guess because it is a lot like the west coast, a little different, like the stones on the beaches are a pretty pinkish color, but not much. The drive along the ocean on the bluffs is cool but after doing the Oregon, North California drive it was kinda underwhelming. Guess it would be better in the fall when all the leaves change. There are many little harbors, shops and restaurants to explore, we spent a nice day in a little town called Baddeck located on the large inland sea called Bras D’or Lake. I had more mussels, yum, can’t get enough and Anne had a lobster sandwich. 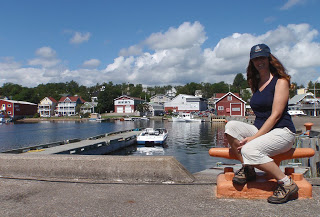 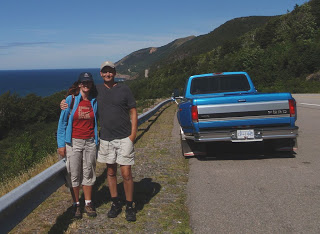 We also stopped at the oddest display some guy named Joe made a scarecrow village perched right near the coastline. Check out the video, weird, hehe.

Currently as I write this post the wind is howling as the remnants of hurricane Irene blow through. Luckily the main part hit well west of us and it’s only windy, no torrential rain. Very muggy out though, a very warm wind, you can tell it came from the tropics.

Next we are headed over to the Sidney, Nova Scotia area because that’s where the ferry to Newfoundland leaves from. We will spend a week or so there till the Labor Day long weekend is over, before heading across. yyyayyyyyyyhhhhh!,,,,!!!! kids go back to school, peace in the campgrounds again. You would not believe the noise last weekend, whoa.