My wife Anne loves to photograph wildlife. In fact she recently traveled all the way to Africa pursuing the passion. So, she was really excited when I told her about a spot in southern Arizona where during the winter thousands of Sandhill Cranes hang out.

It’s called the Whitewater Draw Wildlife area located about 30 miles southeast of the famous western town of Tombstone, Arizona. You know the one where Wyatt Earp and the boys had the gunfight at the OK Corral? The Whitewater draw is low watery area in the desert. It’s not very deep but covers a fair amount of area. I guess it attracts the cranes because they can stand in it a night and have some protection from predators. During the day they take flight to feed, I believe in the surrounding agricultural fields. 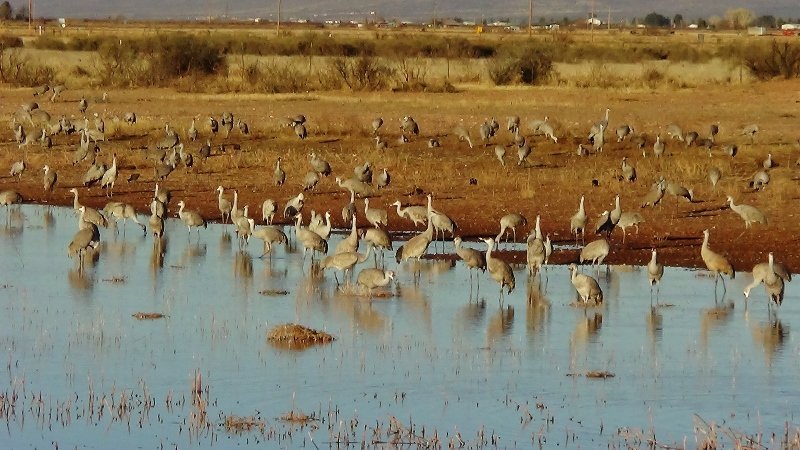 Whitewater Draw Wildlife Area is completely free and on top of that they allow free overnight camping! This is awesome because one of the big spectacles to witness is the early morning flight of thousands of Sandhill cranes. Just before the sun rises they take flight in dizzying numbers, but that is like 6:30 AM. Being able to camp right there is totally sweet. The camping area is quite small and has no hookups so you are boondocking it. They have a pair of vault toilets, some picnic tables and a couple trash bins. Access is pretty easy on well-graded gravel farm roads for a few miles off the highway. 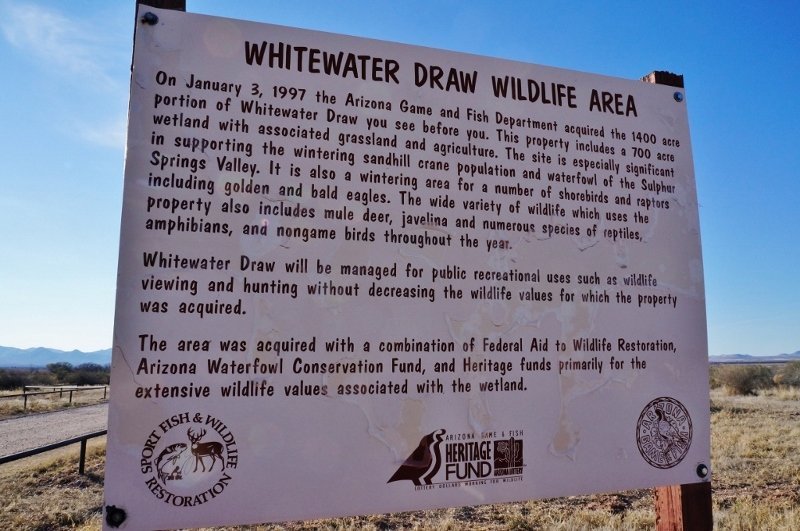 The camp area itself is a small roundabout which can accommodate 8 to maybe 12 RVs depending on their size. It was busy when we were there so everyone made sure to squish together pretty tight. They only allow you to stay 3 nights out of a 7-night span, which is cool as it allows more folks to come and enjoy the birds. Everyone camped there was super friendly and many were photographers so Anne had other tripod geeks to kibitz with. A few of the other RVers even recognized our rig from this blog and came over to say hi. It was nice to meet and trade road stories and get advice on cool places to visit. 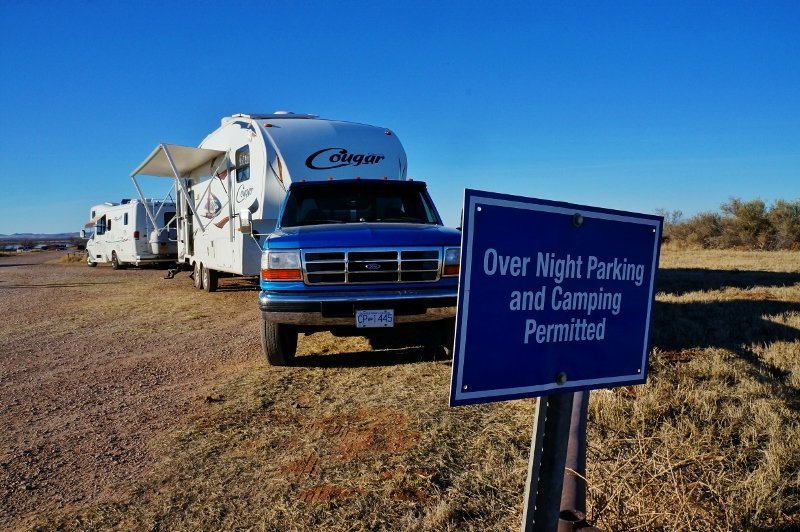 The area has many acres of flooded fields and marshlands. There is a man-made dirt dike that loops around out into the waters allowing access with a nice wide pathway on top. There are several wooden viewing platforms that jut out into the water. All along the pathways and on the platforms are benches so you can hang out and enjoy the wildlife. Other than Sandhill cranes there were many varieties of waterfowl like ducks, egrets, heron geese, etc. We also spotted some hawks and owls. One Great Horned Owl spent the days perched in the rafters of a large shade structure. He was amazing! I’d say he was about a foot and one half tall and what a stare with those big owl eyes. 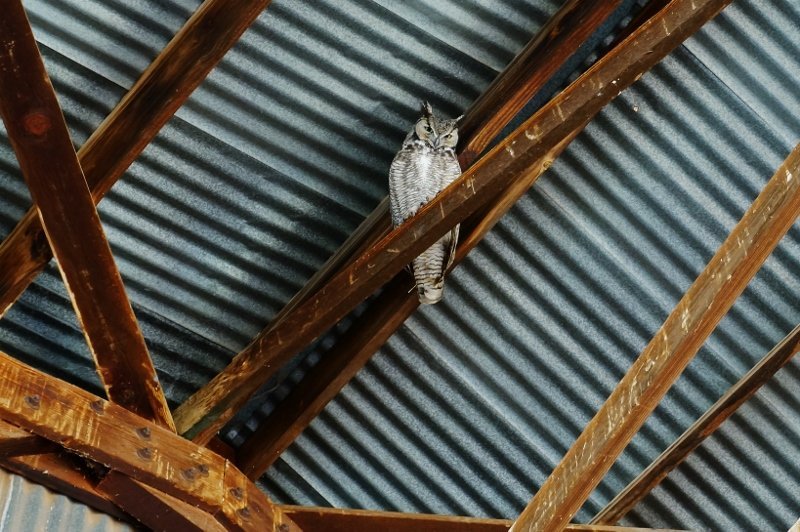 The place is surprisingly dog-friendly allowing dogs on leashes out on the pathways. The birds didn’t seem to mind. It was nice for our beagle Angie to get out and enjoy the place as well. She seemed to find no end of good things to sniff out there.

Dawn Flight of the Sandhills

We set our alarm for 5:30 am, gulped down some breakfast and rushed out to the waterside viewing platform at the crack of dawn. Even though the daytime temps were in the mid-70s at this time of day it was down in the 40s. We were all bundled up with extra layers and toques. I could faintly see all the cranes in the middle of the water, tightly grouped and beginning to cackle up a storm. Slowly the horizon began to brighten and as it brightened it acted as a volume control on the birds. They were getting super excited and their calls became louder and louder and louder! Finally around 6:30 we could see some lifting off in the distance.

Soon there were hundreds and hundreds of birds in flight heading off towards the distant mountains. It was an incredible sight made even more so by the accompanying, frantic cackling of the excited flocks as they began their day. I was flabbergasted at the sheer numbers. As it zoomed my video camera out further and further into the horizon there were just more and more ribbons of cranes flying off into the distance.

Later in the day the Sandhill’s would return and once again the skies would be full of birds as the swarmed around deciding where to land. It was really amusing to watch them land. They came in like little parachutists with their thin legs dangling beneath them and right near the ground they would frantically flap the wings before making the pin point landing. 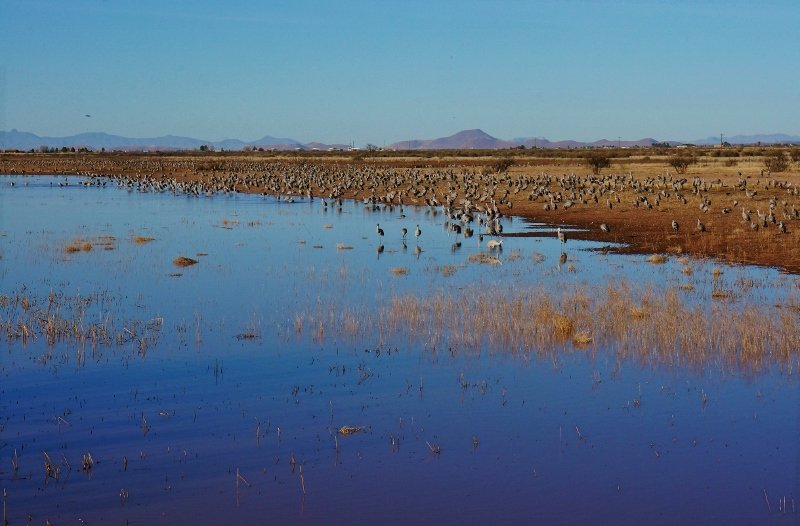 Whitewater Draw turned out to be one of our favorite spots visited this winter. We enjoyed chatting with the fellow campers, making a some new friends, photography and hanging out with the thousands of cool birds. On the last day a storm came through so we missed the morning flight due to fog. Anne was a little bummed out, but then the fog lifted slightly and she raced out to the water. She got some terrific photos of the Sandhills in the early morning fog and mist.

Later in the day we enjoyed a last walk as the late sun lit up the marshland with golden light. What a beautiful and most peaceful place. Two Love Your RV! thumbs up.

Follow our RV adventures! Sign up for the free monthly Love Your RV Newsletter – Receive the eBook “Tips for the RV Life” as a gift. Also head on over to the Love Your RV Forum and chat with me and other RVers about all things RV. – Cheers Ray