I’d like to welcome a special guest writer to Love Your RV. George and his wife have gotten back into RVing, even with some physical challenges. I think it’s awesome that they are back out there enjoying themselves and asked George if he could guest post something on the blog. – Ray

If You’re Housebound, Take Your House with You!

Well, summer is about over and my wife and I have had the best summer that we have had in a very long time. Through Ray’s and his wife, Anne’s, inspiration we overruled our pragmatic arguments to the contrary and bought a motorhome. 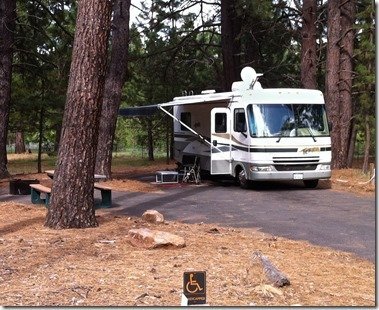 By sharing our story, we hope it might inspire others like us; others with debilitating conditions, that there is an option to being housebound.

Before my wife became ill we spent most of our free time engaged in activities centered around camping: backpacking, fishing, white-water and lake canoeing, water skiing, snow skiing, etc. In fact the first three months of marriage was spent in a 17 foot camp trailer in the woods at Forest Glen, CA. We often tent camped but our greatest fun was had with a ’66 Chevy 4-wheel drive pickup that had utility boxes on the sides and a 6000 pound dead-lift Braden PTO winch on the front. I added a camper shell that we fixed up to be semi-self-contained. We could go anywhere with it, and did. Even though we used small camp trailers occasionally, our comfort zone was a little more on the Spartan side.

I mention that because when my wife became suddenly ill 23 years ago with a complicated auto-immune disorder that manifested itself with a syndrome of symptoms that includes multiple types of extreme pain, and total cellular exhaustion, as well as, easily triggered asthma and allergies. Suffice for me to say she is totally housebound. Obviously, our camping days ended some time ago to our great sadness. I mention all this because I think others will be able relate to our situation.

It doesn’t have to be this way! One of my more serious hobbies is photography and as such I started following Anne’s McKinnell’s photo blog. I loved seeing her images and reading of her and Ray’s experiences in my old stomping grounds in southern California. I have to admit I was a bit envious of the things and places they were experiencing. But also greatly inspired by their decision to “live” now — to take a big risk and turn their back on the paradigm work approach to life, sell their stuff and give their dream a go. 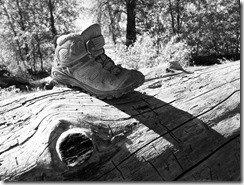 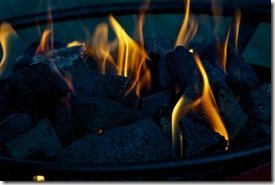 About the same time my son and daughter-in-law bought a 31 foot Fleetwood Class A. While sitting on the sofa chatting and being shown all the features my wife mentioned that it was just like a home. Perhaps it should have been obvious but it was at that moment the epiphany hit us at the same time, we looked at each other and in unison said, “If you are housebound why don’t we just take our house with us”. That phrase has become a bit of a mantra to us.

We got quite excited about the idea, about the possibilities but then, in our pragmatism, started talking ourselves out of it: Tens of thousands of dollars, where to store it, would we really be able to use it, would it really feel like “camping”, how do we buy an RV sight unseen (travel restrictions due to illness), did I mention tens of thousands of dollars on what may be just a pipe dream? We talked ourselves in and out of it a few times; my son thought it would be great, my daughter and daughter-in-law thought we were crazy. But more than anything, Anne’s blog inspired us to go for it. If Anne and Ray can take the risks they took for their dream, so could we, damn it! And because of them, we did.

In February, my son found a 2004 26’ Fleetwood Terra in Sacramento, he checked it out for us (we live 4 hours away), picked it up and stored it for us until we could get down to get it. We had Camping World check it out for us with no real surprises.

My wife and I agreed that all our experiences RVing had to be positive ones or the experiment would fail. So we agreed that, for this year, we would only go to local campgrounds, stay only 2 or 3 nights and no more than every other week. I have been humored that every time we go, my wife is ready to go again the following week. But, “No”, we are sticking to the “baby steps” plan.

Thanks to some good decisions, albeit many in spite of our ignorance, this summer has been a phenomenal success! Far beyond what we could have imagined. Not only were we able to successfully experience a few days at local campgrounds with no health repercussions but my wife’s overall sense of wellness has improved. In addition to mental and emotional health, she has gained some strength and is able to be a little more active. With Anne, I used the expression that the RV gave my wife “a reason for living”. Aside from me and the kids, I feel that is pretty much true. It gives her something to look forward to; something to enjoy for a few days; something to talk about and remember. Not to mention the really nice people that stop and chat a bit; something that doesn’t happen often at home.

If you find yourself with a similar dilemma, go for it. You can always sell the rig if it doesn’t work out (one of our rationales), but you can never know the joy of being out in nature, or on the road, or visiting someone you haven’t been able to, whatever it is for you; if you don’t give it a try.

Author Bio – Following a dream of working in and with nature I moved to northeastern California after high school. My career in natural resource oriented jobs was diverse but can probably be encapsulated as a Watershed Ecologist with emphasis in the base resources, soil and water. We lived, worked and played in the Redwood north coast; lived in the Willamette Valley of Oregon and worked and played all over Oregon and some of Washington. Lived most of our lives in the Sierra Nevadas, Cascades, and Great Basin.
Share the post