Home
Blog
In the high desert of New Mexico

We went north from west Texas and into southern New Mexico and the first stop was Carlsebad Caverns. Man what a deep hole! It’s around a 700 foot decent, but they have built a concrete path down so it’s not too bad. Also they have an elevator to wisk you back up, yay! Unfortunately my little point and shoot camera was basically useless down there so you will have to wait until Anne process her pix. Needless to say its way cool in the cave with lots of neat rock formations. 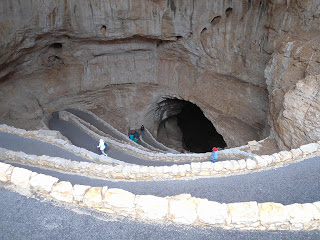 Guadaloupe National park is only 35 miles down the road from the caverns so we headed there and camped right in the park. When we first arrived the mountains were covered in snow as a cold front had just passed, so it was a rare treat to see snow in the desert. It only lasted a day or so though as temps got back up into the 80s pretty quick. One day we hiked out in to a nearby canyon to see an old cabin built as a homestead in the 1930s. It as only a 4.7 mile hike but at 6000 feet and in the dry hot desert it was fairly taxing, and smart Anne decided to go with a black sweater, hehe. 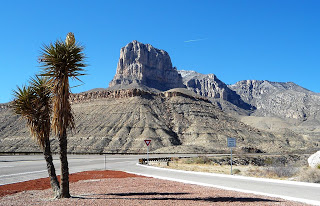 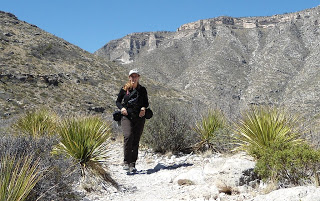 Next we stayed at a few New Mexico State parks on the way to see White Sands National Monument.
I can’t rave enough about the state park campsites here. They are spacious , have electric, water, free showers, dump stations and generally great views for 14 dollars a night or you can buy a yearly pass for 225$ and then pay 4 dollars a night. geeshhh, back home in BC you pay 30 dollars and get a fire ring and maybe a picnic table. 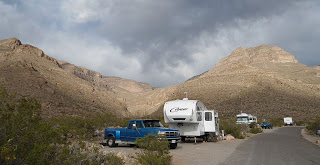 White Sands is straight up awesome. Miles and miles of white gypsum dunes with a sprinkling of cacti and grasses. First day we saw it we lucked out and a local dude had his camel there, was so cool to see and it was friendly, Anne loved it. We had two great evenings there watching the sun set on the dunes, so beautiful and peaceful and when the wind quit the second night it was eerily quiet. The great expanse makes you feel really small. 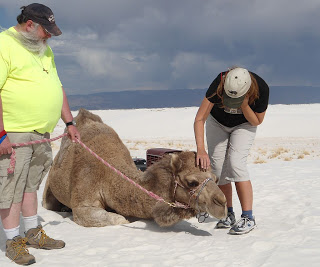 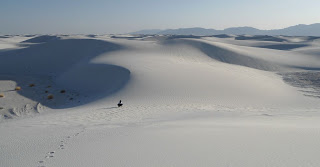 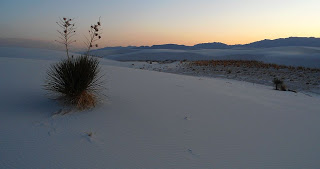