Living full time in the trailer in such close quarters using the headphones becomes essential. Like if I want to watch some annoying guy stuff and my wife is busy writing on her computer. So we have been using the existing headphone jack but I wanted a better location. Our 2011 Keystone Cougar 276RLSWE came with a nice Jensen Audio System with built in DVD. It has a headphone jack but where I really need to use headphones is at the back of the room where the chairs and sofa are. I’ve been using a long cord but that gets kind of impractical after a while with the long cord wrapped around things. When we move the rig I have to unplug it and set it up again at the next RV site. I could get some wireless headphones but they still need wires and power and batteries, etc. So I decided the simplest most elegant solution was to run a special wire to the back and into a permanent dedicated headphone jack.

First task was to plan my routing of the wire. I wanted to keep the existing headphone jack so I simply plugged my remote wire into it. Then when I want to use the remote jack I just plug it in and when we want the speakers we unplug it. Since I had ran wires close to the Jensen System when installing my 1000 watt Inverter’s AC outlet and remote panel I knew I could follow those wires down through the floor and out under the basement storage near the sewer connections. Being the wire for the headphone jack is very thin; it was easy to run it through the existing holes. 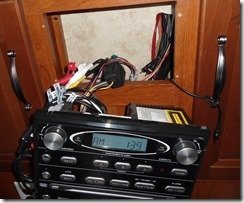 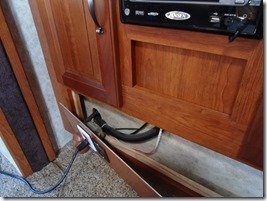 Once I dropped the wire under the basement storage I ran it along a channel where most of the Keystone manufactures wiring runs. I did cheat a bit and ran it outside for several feet along the outside of the frame just above the trailer tires. There happens to be some triangle shaped bracing, perfect for keeping the wire in place. This little shortcut saved me from having to remove several hard to get at screws holding the chloroplast material covering the bottom of the trailer. I then ran the wire back inside the underbelly and back to the rear corner where the water pump and fresh water tank and fill live. The underbelly of the trailer is completely covered so in running the wires I utilized an access flap I had previously cut out near the sewer connections and at the back corner under the water pump. I also needed to undo a few screws along the edge to be able to guide the wire along. 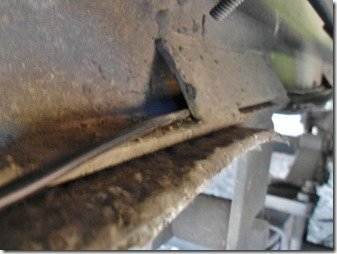 The water pump/fill area is where it became a little tricky. I couldn’t find an easy way to get the wire to its final location inside the center table between the swivel rockers. I had to drill! Drilling in an area full of water piping is a little unnerving. I measured and re-measured and re-measured until satisfied I had found a good spot. It was 22 inches from the side wall and a few inches from the back wall. I pulled back the carpeting , drilled through the floor, fished the wire up, I then ran it along the back seam and into the center table enclosure. The wire is small enough that it tucked easily between the carpet and wall. 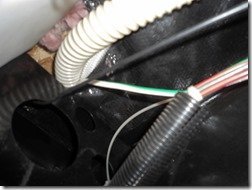 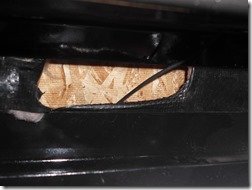 The final task was to attach the wire to the headphone jack and mount the wall plate. I soldered on the thin wires and added a healthy dollop of silicone to help hold them in place. The paneling on the table is very thin so it was easy to cut out a hole for the jack using a simple serrated edged steak knife. The wall plate mounted easily with a couple wood screws. 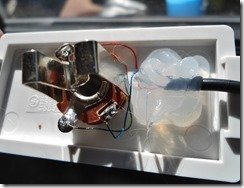 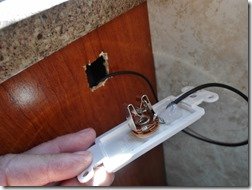 Success, I now have a remote Headphone Jack in my Keystone Cougar Fifth Wheel Trailer and with the nice white panel it almost looks factory.  I ended up needing close to 30 feet of wire to complete the run. I used a 1/4 inch stereo jack and the panel is actually a coax TV panel, I just removed the coax connector and used the headphone jack in its place. 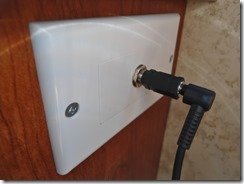 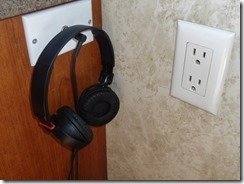 Kind of hard to understand explained in writing? I figured it would be so I made a video detailing the install.

For more great RVing info subscribe to the Monthly Newsletter. Receive my eBook “Tips for the RV Life” as a gift!