Several months ago a company called Titan contacted me offering to send out a sample of their multi-purpose rack fan. The idea is to use cooling fans to reduce heat buildup that happens in the back of absorption style RV refrigerators. More air flow through the fridge’s ventilation stack improves cooling performance, especially on hot summer days.

Since the Dometic DM2652LBX fridge, we had install two years has no cooling fan of its own, I was keenly interested in giving the Titan fans a try. From the photos on the website they looked to be of decent quality and promised quiet operation. When the shipment arrived from Titan, I was surprised to find not one set of rack fans but three. They sent two different models/sizes of fridge vent fans and one roof vent fan.

(Fair Disclosure: I received the Titan fans free of charge. However, I’m not an affiliate for Titan, and I received no monetary compensation for this post. – Ray)

I decided to install all three rack fans. I installed the smaller TTC-SC22 rack fan on the fridges outside access panel and the larger TTC-SC09TZ on top of the refrigerator roof vent. The third and much larger TTC-SC21 rack fan is designed for cooling the inside of the RV. It gets installed in what they call the “Roof Window” or what we call the roof vent.

That’s one thing I noticed right away, the products appear to be targeted at an international or European audience where RVs are a bit different in design than our North American counterparts. Because of this, I found most of the included mounting hardware didn’t work well or at all. I ended up devising my own mounting arrangements. 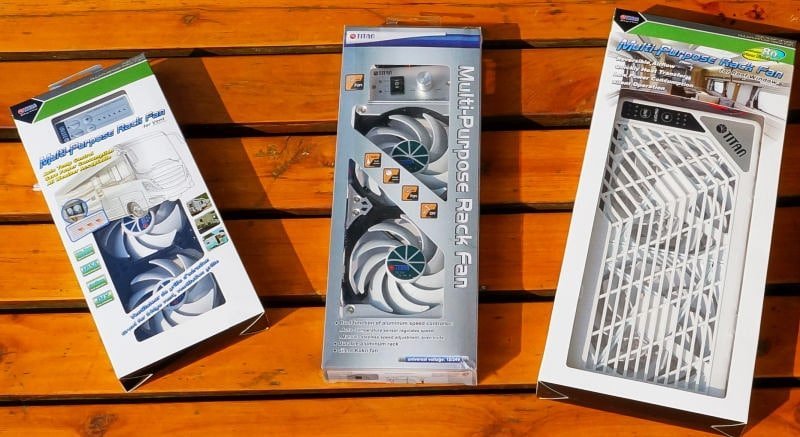 The electric hookup was straightforward, though since the fans are powered by the standard 12 volts DC. One feature I like is the fans are electronically controlled. Providing multiple speed options. The TTC-SC22 and TTC-SC09TZ models also have auto temperature control modes. The TTC-SC21 is reversible.

I installed the Model TTC-SC22 fan on the back side of my sidewall refrigerator grill. The fan will suck fresh air into the fridge compartment and up through the ventilation stack to the roof vent. I found the fans to be quiet as advertised. For power, I tapped into the 12 volt DC supply to the fridge. The circuit can easily accommodate the minor amperage the fans draw, rated at max .46A and 5.76 watts.

As for the attached control box, I zip tied it to existing wiring and set it for auto temperature mode. Next, I taped the temperature probe up inside the stack. At 68F the fans will come on automatically and continue to speed up to a max RPM at a temperature of 113F 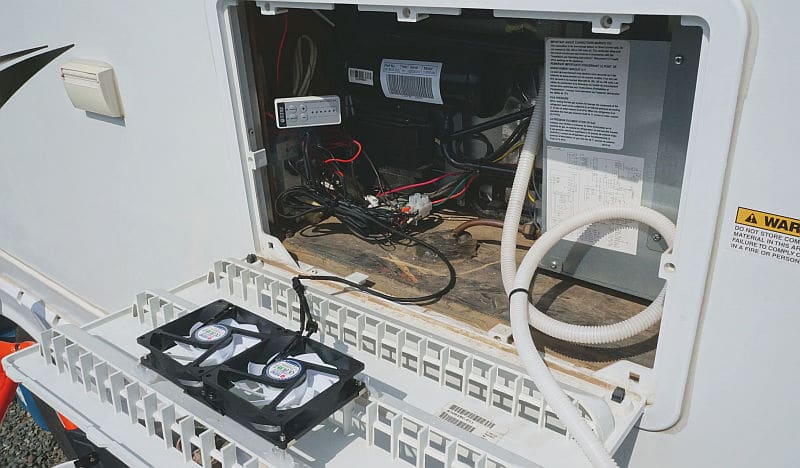 To mount the small Titan fans I had to improvise. The supplied mounting hardware wouldn’t work well with my Dometic fridge grill. I decide to used silicone rubber on each corner to hold the fans in place. They are lightweight so it should do the job and make removal in the future simple. The fans are IP 55 rated for water and dust so should be able to handle the partially exposed environment behind the grill. 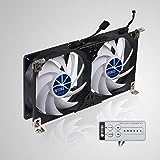 The Model TTC-SC09TZ(B) was the fan kit I was most interested in. It has a little more robust looking design with aluminum bracing and a metal control box. I also like the manual switch and speed knob over the digital push buttons. Called me old school. 😉 Just like the TTZ-SC22 fans, it comes with an auto temperature control via a small thermal probe.

The size I received was 120mm and fit well where I decided to mount it on top of the roof vent. ( Other optional sizes are 90mm and 140mm). I drilled holes on the plastic roof vent shroud and bolted on the fan using some of the supplied hardware.

I mounted the control box on the wall above a kitchen cabinet near the ceiling above my RV fridge. Located beside it is a power switch I had previously installed for my Winegard WiFi booster. Mounting the control box here gave me convenient access to a constant 12 VDC source at the Winegard power switch. The location is close enough to the roof vent for the approximately 6 feet of fan wiring to reach.

I ran the power wiring through the wall at the back of the cabinet into the fridge ventilation stack and up to the fans on top of the roof vent. I also ran the temperature probe back there and taped it inside the vent. When the fans are running, even at max RPM I can’t even hear them. They will draw hot air out of the fridge ventilation stack as the other set of fans are pulling fresh air into the lower sidewall grill. I should get excellent cooling action! 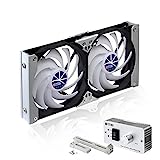 I chose to mount the Model TTC-SC21 fan in our bedroom/shower roof vent. It’s been on my list to put a fan in here ever since I installed a Fantastic fan in our kitchen. It’s nice to be able to cool the rig when boondocking without AC and to remove excess moisture when in colder environments. I figure with a fan in two vents now I can have them work in tandem to circulate air through the rig.

Installation was pretty easy. Close by the vent is a lighting fixture with a 12VDC power source. I tapped into it and then mounted the fan inside the vent’s plastic bezel. Once again I found the mounting hardware didn’t help me much, so I used a nut and bolt on each end to hold the fan in place. It barely fit. The sales literature indicates it’s designed for roof windows of 360mm – 550mm.

The TTC-SC21 works OK enough, but my initial impression of it is lukewarm at best. It doesn’t move a tremendous amount of air for the amount of noise it makes. The plastic casing has a nasty chemical smell to it; I hope it dissipates with time. Also, I don’t like that the fan settings like speed and direction aren’t remembered during power cycles. It always comes on at Speed Level 1 and the IN direction. The good points it has is a simple installation, compact package and cheaper than many comparable products on the market. 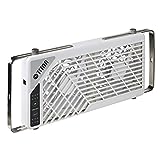 I have to say I’m pleased with the performance and features of the two fridge vent fans. They draw very little power and run extremely quiet. Whether they stay quiet only time will tell. I’ll be back with an update on them in the future after they have been working a while.

As for the 6-speed reversible roof vent fan, I’m just OK with it. It’s a slick looking compact package but in my opinion, doesn’t offer near the performance of say a Fantastic or a MaxxAir fan. The Titan TTC-SC21 specs out at max 280 CFM (cubic feet per minute) whereas the others are in the 900 CFM range. 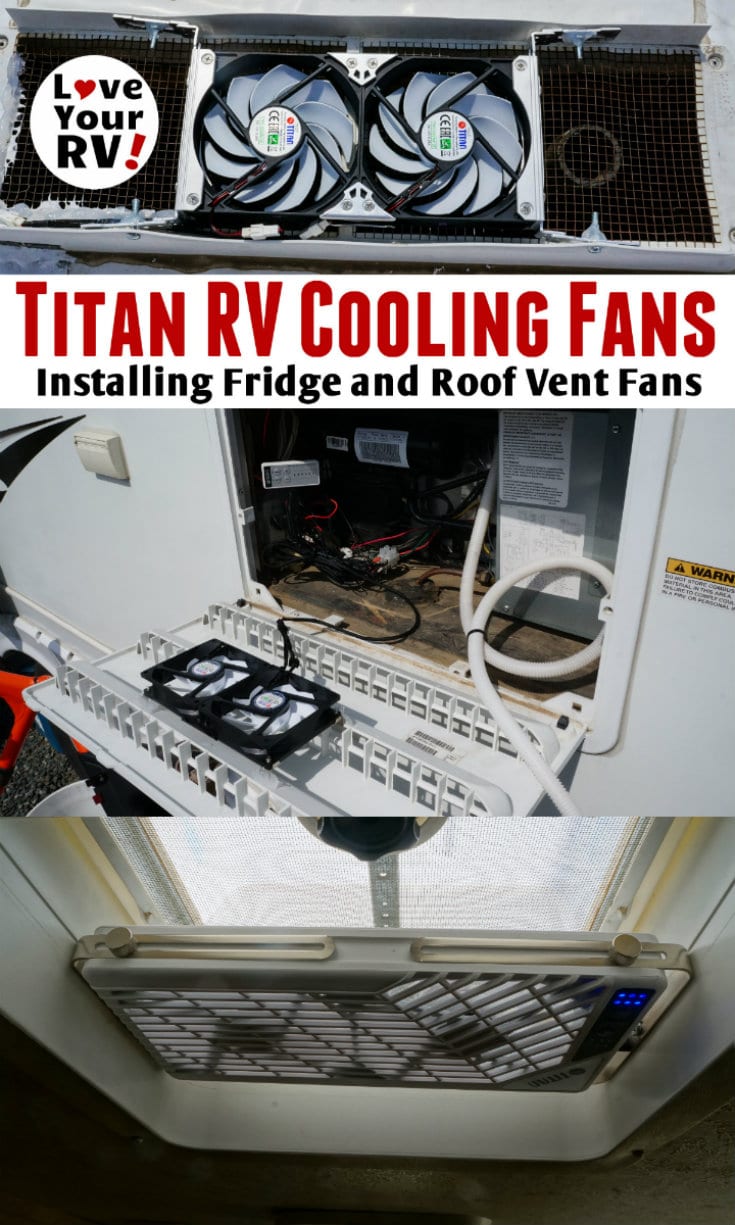