A “pin box” is the part that connects your fifth wheel trailer to the hitch located in the trucks bed. The standard pin box you see on the majority of fifth wheels is solid steel with mounting holes on one end and the connecting kingpin on the other.

This does the job but since it’s a solid piece of steel it directly transfers forces between the truck, road, and trailer. On many road surfaces, this can lead to an uncomfortable ride and stress on the trailer frame and truck. It only makes sense to have some sort of cushioning and suspension system at this connection point. Most commercial tractor trailers utilize air suspension. Why not us fifth wheel RVers?

How Does the Air Ride Work?

The Lippert Components Air Ride Pin Box comes with several features designed to protect our fifth wheel frame, hitch, and truck from the forces everyday towing can throw at them. The Air Ride pin box is split into two pieces with a pivot point so it acts like a jaw with movement up and down. Between the jaw are an inflatable thick rubber air bag and oil filled shock absorber. When potholes or bumpy road surfaces are driven over the airbag cushions the blow and the shock absorber dampens the rebound action. 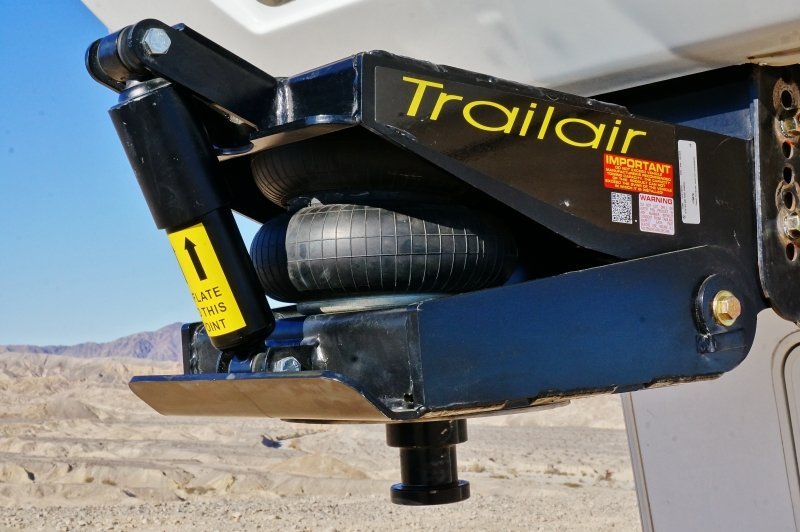 Note: The Air Ride Pin Box was provided to Love Your RV! free of charge for review.

Most folks will likely want to have a dealer install the Air Ride as it is quite heavy at around 180 lbs. and requires a torque wrench and a bit of muscle to tighten up the large bolts. However, if you are a “DIY” guy like me it’s not too difficult at all.

First, you want to make sure you order the right size pin box for your trailer with the appropriate weight capacity. It has to match the bolt pattern and have the proper distances between the bolt holes and the kingpin. Check the Lippert Website for more information.

Then you unbolt the original pin box and bolt on the new Air Ride. You’re going to need some strong helpers, a hydraulic lift or a bit of ingenuity to save your back. This is actually the second pin box I’ve bolted on, the first being Lippert’s Flex Air model (See my blog post detailing the install). This time, I didn’t have a hydraulic lift table so I used my truck bed.

The new pin box came on a wood pallet so I placed my spare tire on the trucks tailgate and the pin box w/pallet on the tire. This gave me enough height to slowly back the pin box in place using the trailer landing jacks for fine adjustment in height. To align the bolt holes I used a hydraulic floor jack I carry for tire changing to nudge the heavy pin box up in place.

Finally, once the Air Ride pin box is bolted on you need to pressurize the air bag. The truck and trailer have to be on level ground to properly do this. Located on the top of the pin box is a regular tire valve which you use to fill the air bag until a marked point on the shock absorber casing is reached. I found about 45-55 PSI did the trick.

Testing out the new Air Ride pin box and comparing it to the original solid one was an easy task for me. I’m currently in an area I’ve trailered through several times in the past few years of snowbirding and know the roads very well. I’ve towed several hundred miles with it so far over a variety of surfaces from perfectly flat newly paved highways to off road gravel and dirt roads. I even took it down on of the lumpiest stretches of pavement I’ve ever driven and the Air Ride came through it with flying colors. I absolutely love it!

The new pin box really smooths out the normally harsh bumps from things like pot holes, bridges, repaired pavement patches, etc. Of course, you still feel it in the trucks suspension but gone are the harsh jolts to the hitch and I assume the fifth wheels frame. It also works well for quick dips in the road, instead of the fifth wheel nose weight crashing down on the hitch plate the force is instead cushioned by the air bag.

We love to get off the beaten path to do some boondocking which many times mean several miles or more of dirt roads. With our 1 ton dually trucks stiff suspension and the old solid pin box it was sometimes a very jarring affair. The Air Ride pin box really shined on the back roads eating up the usually harsh vibrations and smoothing out the lumps and bumps.

One improvement I didn’t expect was with handling but I’ve found a definite improvement towing through curvy and undulating type roads. I find I feel the tugging action of the trailer a little less as I enter and exit corners. The whole rig seems to work as a more of a complete unit.

One of my biggest worries as a fifth wheel owner has been some type of internal frame damage. I can only imagine the pain in the butt and the cost a repair like that would be, especially for full-time RVers like us. The Air Ride has given me some peace of mind. I should have upgraded sooner. 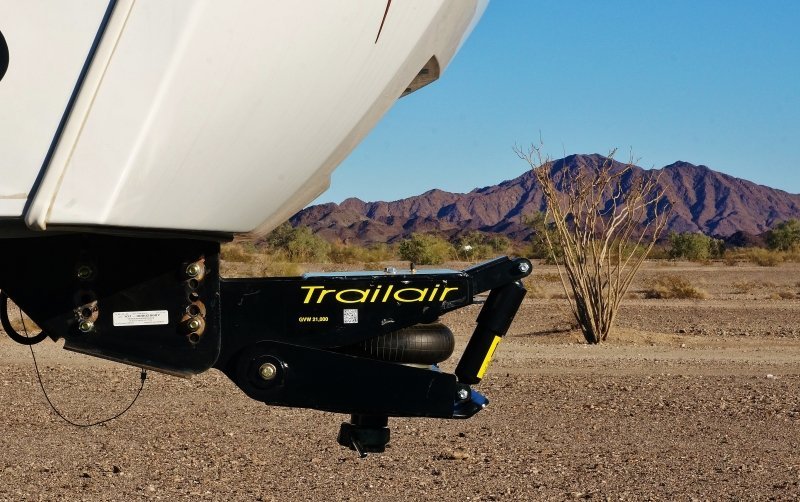 The only negative I found with adding the Lippert Air Ride pin box is the weight of it. It’s a hefty beast! I figure I’m giving up about 120 lbs. cargo capacity, a precious thing for full-timers. Since almost all the extra weight is going to be added to the truck bed be sure to check your max weight capacities.  I’m lucky to have had some extra wiggle room with my 1-ton truck towing a relatively light weight fifth wheel. But I imagine with heavier fifth wheels it may be a concern.

Video of the Lippert Air Ride Pin Box in Action

The new Air Ride pin box has really lived up to its billing. I would recommend it to anyone towing a fifth wheel who wants to protect their investment and smooth out the ride. I love to see it working in the rear view mirror. As I watch the jaws compress and release I know the unit is doing its job. 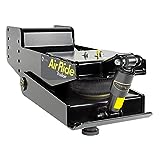 For those wondering why I switched from the Flex Air Pin Box I had originally installed to the Air Ride it has to do with a minor chucking (tugging and pushing action) issue I experienced. Everything about the Flex Air was great except on smooth roads it actually introduced a very minor but annoying chucking action we never had with the solid pin box.

Lippert has several pin boxes to choose from and each is designed to solve a variety of ride problems. It turns out the Air Ride is what I should have had to start with. It is the best match for my particular truck and trailer combination.  More information can be found at the Lippert Support website or their YouTube Channel. I’d encourage you to contact them or a qualified dealer when choosing. – Cheers Ray 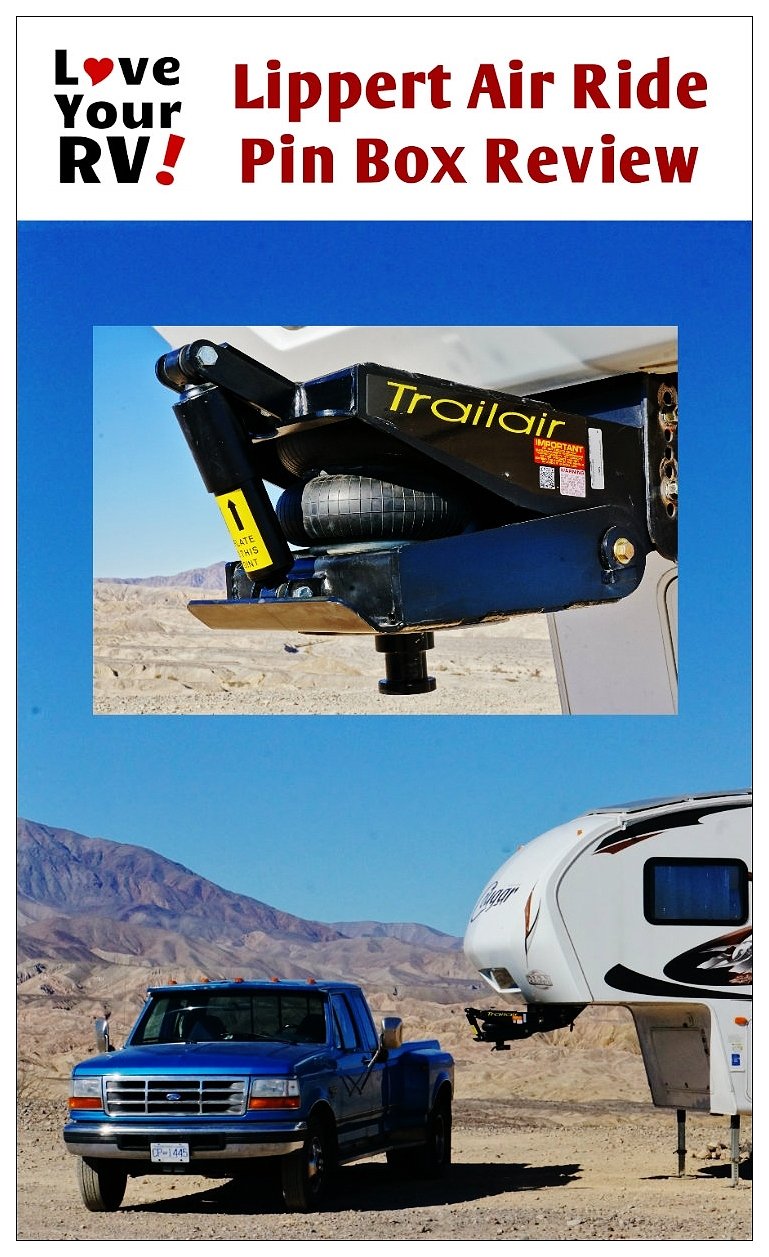