When I first started out RVing I heard many strange terms being thrown around by experienced RVers. Slowly as I got into the RV lifestyle I learned what all these weird sounding things were. Like any hobby or niche activity RVing has it’s own set of slang terms. To give you new RVers out there a leg up here is my Newbie Guide to Weird RV Jargon.

Use to describe the small vehicle you see being towed behind a large RV. Sometimes referred to as a “dingy”.

This is the round cylinder shape piece hanging down at the very front of a fifth wheel trailer. It connects to the jaws of the fifth wheel hitch in the back of the tow vehicle.

Nuts that keep your wheels on. It is important to make sure they are torqued (tightened) to the proper amount of foot pounds using a Torque Wrench

Slanted blocks, usually made of plastic material but sometimes wood, used to prevent the RV from rolling. 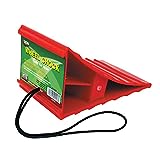 Refers to the storage under the main RV living area, generally accessible form the outside storage bay doors and sometimes through a trap door or laundry shoot. 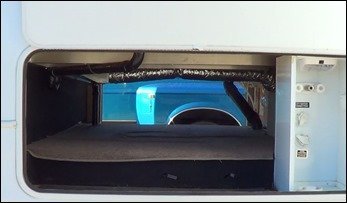 Term for a sewer dump station where RVers dump their waste tanks.

Small round rubber ring used to make a tight seal between your sewer hose and the campgrounds sewer hole. In some states like Florida they are mandatory.

What some RVers call the flexible sewer hose used to dump the RV waste tanks.

Truck or trailer with large liquid tank on it that comes around to pump out the RV waste tanks. Saves a trip to the sewer dump station when camped in areas with no sewer connections.

A sometimes violent back and forth motion experienced during towing. It is usually caused by an unbalanced trailer or uneven roadway.

Name for the standard RV TV antenna which resembles a pair of wings.

Portable wheeled plastic tote used to transport waste tank sewage from the RV to the dump station, usually towed at slow speed by the tow vehicle. 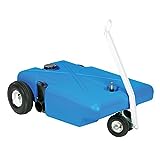 Describes the engine brake used on some diesel vehicles.

Although Jake brake properly refers to the Jacobs brand of engine brakes, the term has become a generalized  trademark and is often used to refer to engine brakes or compression release engine brakes in general, especially on large vehicles or heavy equipment. – http://en.wikipedia.org/wiki/Compression_release_engine_brake

Slang for “fifth wheel trailer. “Hey, what a sweet looking fiver you have there!”

Class “A” or bus type RV with a diesel engine mounted in the rear end.

When backing a trailer into a RV site situated on the passenger side of the RV. On this side it is much more difficult to see where you are backing.

Refers to a person that migrates south during the winter months to take advantage of the warmer climate.

What RVers call a regular type of house.

Generally refers to RVers exchanging work for a free campsite, utilities, and possibly a small wage. One example is volunteering to man the visitor center in a National or State park in exchange for free camping

Small two wheeled trailer used to attach a tow vehicle to the back of an RV.

A device that attaches to the sewer outlet on the RV. It has a small pump inside and usually cutting blades to chew up the solid waste and then pump it down a smaller than normal sewer hose. One advantage of this is the waste can be pumped up hill. 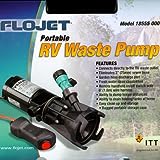 Special aluminum or magnesium rod used inside Suburban brand hot water heaters to prevent tank corrosion. They usually need to be changed once a year.

Slang term for the brush like rear flap hanging down from the back end of RVs.  They act like a single large mud flap. Looks like they are sweeping the roadway.

Describes the extra distance the rear end of the RV uses during a turn. The longer the space between the rear wheel and the end of the RV the larger the tail swing will be. It is very important to know how much tail swing your RV has when turning corners in tight situations. 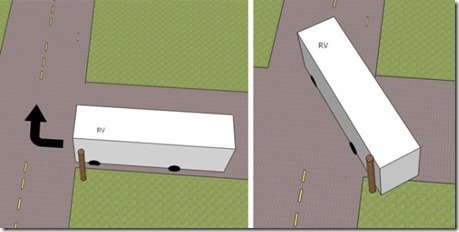 You are called a triple tow when you are not only towing your trailer but a second trailer as well. In it’s most common form you will see a truck towing a trailer with a boat trailer behind that.

RVers slang term use to describe overnighting on the Walmart Parking lot in your RV.

Well those are the weird RV terms that I have learned over the last few years. There are many more technical ones that I have left off the list. These are the more weird or strange sounding ones I could think of. Got any strange examples of weird RV jargon let us know in a comment below. Would love hear it. – Ray