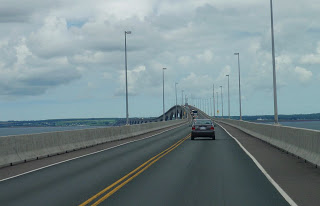 Drove the Confederation bridge across the Northumberland Strait into PEI. Wow what a engineering accomplishment. It’s a 8 mile link between New Brunswick and PEI. The longest bridge across ice covered waters in the world. PEI is beauiful!

Most of the Island is rural farm land filled with quaint little villages and marinas. The beaches are terrific. Most are red sand with some white sand and the water is warm for being so far north. Some of the beaches boasts the warmest waters north of South Carolina. The people are as warm and friendly as the beaches. Our favourite campsite was at RED Point near the eastern tip of the island. It offered a spectacular view of the ocean and it’s own red sandy beach area. We did many day trips around the Island to take in the sites. The tourist area is called Cavendish where the Anne of Green Gables books were based and has many shops, restaurants and museums to explore. We dined at a local eatery and had our fill of lobster, mussels, oysters and clams, yumm! 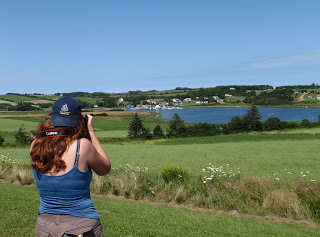 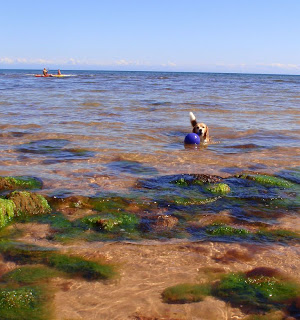 THe beagles had a blast as dogs are allowed on most beaches here. Oscar got off leash on a beach for the first time in a while and ran as fast as he could which is quite slow as he is very old now. Angie ran and fetched her jolly ball and even went for a dip in the water. Anne also loved it, she adores the beach and sat out reading her books and soaking up the sun. So basically PEI was heaven for us BUT FOR ONE THING< GRRRRRRRRRRR>>>!!!!! MOSQUITOS, oh my god, the little bastards. There were very few ate REd point but when we moved west across to a campground called John Cabot on the MApleque Bay they were swarming. We all lost a gallon of blood and had to stay in the trailer most of the time. All in all though though it was a great time and would like to come back one day, now off to Nova Scotia. looking forward to spending a week or so in Cape Breton .