Well we made it across ontario and are into Quebec, yay! Ontario was so hot and humid with bugs that want all your blood, yuck, we drove from Michigan all the way to near Ottawa but got stuck in a little town 50 miles east called Renfrew because the tranny on the big blue ford went into limp mode, basically the computer sensed a problem and put it into a mode of self protection. Only problem was to get the trouble code so it could be troubleshot. It was Saturday and no shops were open, had to wait till monday. I found a way to get the codes using a ohm meter and I pulled code 14 and 62 which meant RPM ssensor and converter slippage, not wanting to drive it and make it worse I waited,,,……

While waitiing a massive thunderstorm hit, with small tornados and took out all the power in the area for 2 days, got the truck towed and to the local ford shop that had the old code reader and a decent mechanic that found it was only the RPM sensor but because of the power outage no computers were working so part ordering was delayed. Decent little shop though, they gave us a free loaner and I got the truck repaired for 100 bucks parts and 120 labour.

Finally we were back on the road just as the hottest day on record was coming, around 110 degrees with the humidex so I told Anne lets drive at night and out run the heat. We left at 8 pm and drove through Ottawa and headed toward Montreal, stopped for gas and food at one side of the city and cruised through it at Midnight still was 80 degrees out.
Found a nice little truck stop near Trois Riverie and crashed for 4 hours. Back up at 5 am and drove straight to Quebec City and got a nice site close to the city and away from the heat in the east.

Quebec City is really cool, we did a walking tour and learn the history of the place, much of it dates back to the 16th century, felt like I was in europe, now we are 150 miles east of there in a little town called Riverie du Loupe.
It is very french here, I know very little french, the west of canada is totally english speaking, so its really interesting.
The town is right on the St Lawrence river and tommorrow we have a boat cruise booked to go whale watching, we have that in Victoria but here they have beluga whales and it will be neat to get out on the river.

Thats the update, having a great time, I highly recommend this no working stuff,

Oh and the stinking beagles got a bath too! 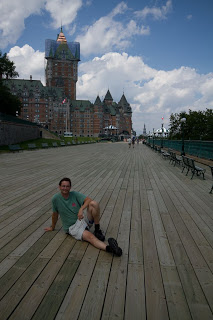