One thing I’ve hated about our Atwood Wedgewood Vision RV gas stove top is the manual turn sparker. It functions OK but is quite loud. I get up much earlier than my wife and like to make myself a cup of tea. Sometimes it wakes her up, not good. 😉 I’ve wanted to add a quieter electric push button sparker for a while.

The other day while searching through Amazon I came across a battery operated Onlyfire BBQ igniter that looked like it would do the job. Measurements indicated it would fit the space, but I would have to modify the mounting hole a bit, enlarging it. It was inexpensive, so I ordered one to give her a try.

Disclaimer: Working with LP Gas can be dangerous. I’m not a certified RV technician merely an RV owner. This post and video should not be taken as instructional. If you decide to work on your own RV LP system, do the research and be aware of all risks involved. I accept no liability, you have been warned. – Ray 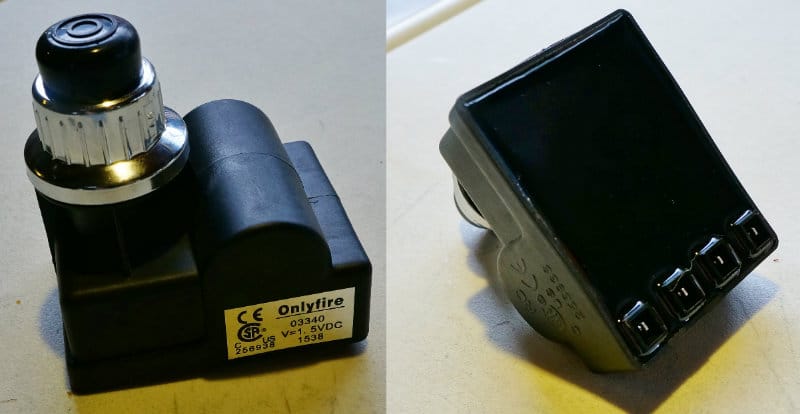 The replacement igniter install would prove to be extremely straightforward other than the expanding of the mounting hole. The old mechanical sparker came off by unscrewing a pair of screws and unplugging the three igniter wires.

Next, I removed the knobs and front plate by unscrewing four more screws. Two on the top and two on the bottom. Once off it would make working on it a little bit easier. I borrowed a 7/8ths metal hole saw from brother-in-law, luckily we happen to be camped in his driveway. He suggested screwing a block of wood to the back to help guide the saw. It worked perfectly and soon I had a 7/8ths round mounting hole.

I remounted the front control panel and installed the new push button sparker. The Onlyfire igniter came with a plastic retaining nut to hold the unit in place. I reused the existing wires. They were round, and the new igniter pins were blade shaped so with a pair of needle nose pliers a carefully squashed the pins making them work.

Finally, I added the single AA battery that powers the Onlyfire BBQ igniter and tested things out. It worked great. Soon I had myself a boiling kettle for a well deserved hot cup of tea. 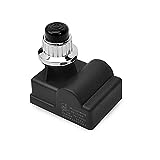 Update – I originally installed the 4 pin sparker but it didn’t work great as the extra pin would arc across, so I ended up replacing it with a 3 pin model

See More Love Your RV  mods and upgrades in the archives