I’ve driven Interstate 10 between Phoenix and Tucson several times now and each time I had admired a small mountain peak that juts up all alone from the desert floor. You can see it for many miles and it has quite the unique shape. Last time by I noticed there were a bunch of RVs camped near the base of it and made a mental note to check it out online. I found out that it was an Arizona State Park called Picacho Peak State Park and it looked like a nice place with great reviews so we booked into it for a 4 day visit this year. 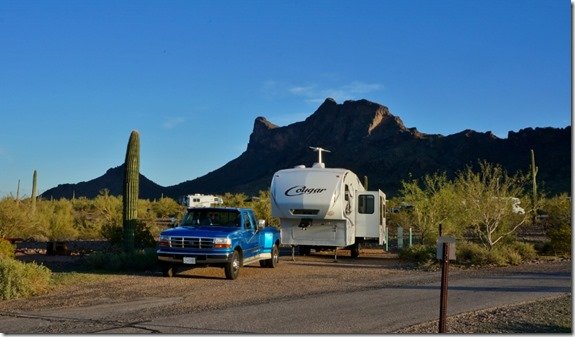 When you enter the park there is a ranger station to stop at and register for camping. They were extremely friendly and helped us sort out a camping spot best for our rig and orientated so we got a nice view of the Picacho Peak out our rigs big back window. The rate is 25 dollars a night taxes included for a site with electricity only. They have a fresh water fill and dump station on site. They also have free showers. Navigating even larger rigs around the park is a breeze; the roads are wide and all the sites large. Most are very simple slanted back in spots and scattered about are some pull-thrus. All the sites have nice wide pads and most are pretty level. 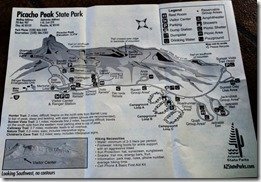 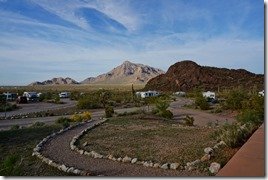 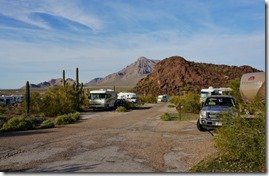 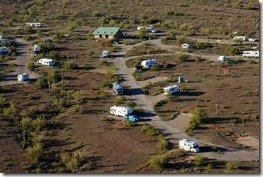 I was very impressed with amount of room they left around most of the sites and the terrific desert views. The only negative to the place would be the proximity to the nearby busy Interstate 10 and the traffic noise. It’s not super loud or anything more of a far off drone. One perk for those that love to have fast internet access like us is the campground WiFi. It’s not a free service at $2.95 a day or 3 days for $7.95 but unlike most it was nice and fast with no apparent data cap or limits on number of computers you could have on it.

We have heard how nice Superstition Mountain is from fellow RVers and had planned to take the RV there for a few days but the Lost Dutchman State Park was pretty well full. So we decided to at least head up for a day trip to check it out and do some photographing around sunset. From our spot at Picacho Peak State Park it was roughly an hour and a half drive. One nice thing about these two Arizona State Parks is the fact they allow dogs on the hiking trails so our beagle Angie got to go along and enjoy the hike as well. It was a beautiful sunny day with temps near 80 degrees. As we approached the Lost Dutchman State Park and Superstition Mountain came into view I quickly saw what everyone was raving about. We paid the 7 dollar day use fee and spent the afternoon hiking all around the mountain base among the cactus covered landscapes. They have a nice campground area with views of the mountain and it was very full with RVs. Arizona spring break had begun and with the park being so close to Phoenix it was fully booked. We enjoyed a picnic lunch at one of the many day use sites and headed out for a peaceful sunset photo shoot. Some of the wild flowers were starting to bloom and Anne got right in amongst them to shoot the scene. By the end of the day I had a very tired beagle and a happy photographer on my hands. 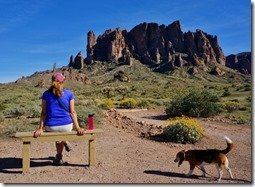 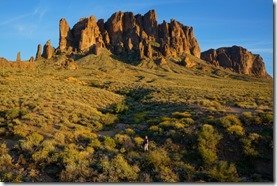 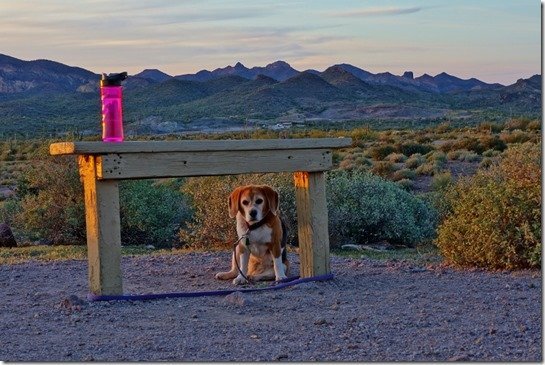 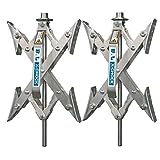 There are several nice hikes in the park. A few easy and moderate ones but the star attraction is called the Hunter Trail. This is rated as difficult as it goes up in elevation very fast and the trail has loose rocks and sections where you have to use cables to help yourselves scramble up along exposed rock. There are two parts to the hike; the first takes you up to what’s called the saddle and the second all the way to the summit of Picacho Peak. After a few days of sitting in the campground looking up at this cool looking mountain I just had to try and get my butt up there. Early one morning before it got too hot I headed out with my camera, lunch and a bunch of water to give it a go. I decided I at least wanted to get to the saddle part. 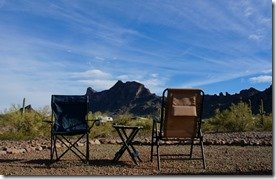 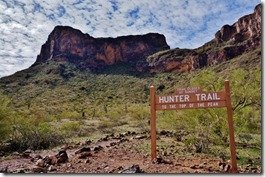 As I slowly trudge my way up the trail I became aware really fast how steep the accent was. I thought I was in decent shape, not! About halfway to the saddle my breathing was pretty rapid and I had to take a rest, my first of several before I finally made it to the saddle area. I met many hikers along the way as this is a popular hike. Some were like me just trying to get to the saddle part; others were more avid mountain hikers and headed to the top. A few were endurance athletes and were practically running up the mountain. OMG! Now I felt pretty lame. The trail zig-zagged for quite a stretch then along the shear rock face. If you don’t like heights it can be pretty scary, I met one lady that gave up and headed back down. The pathway is actually not that narrow but it is a long way down and can freak some folks out. 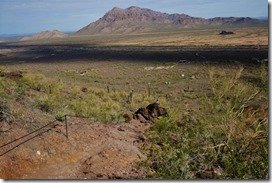 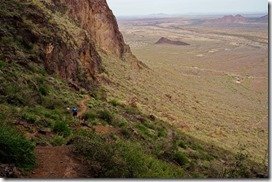 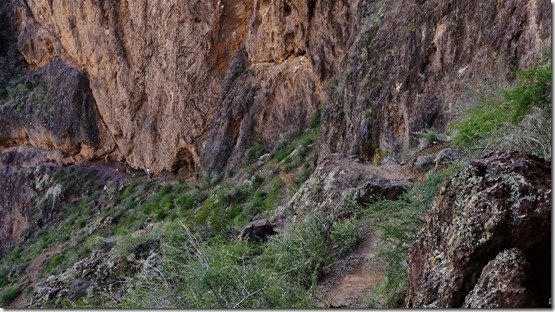 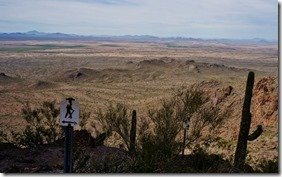 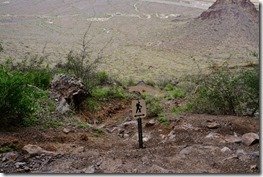 Once up there I was treated to some amazing views and had myself a nice lunch and chatted with fellow hikers that had made it as well. I had a mad thought about continuing on to the summit but when I saw that you had to descend back down about 300 feet before you went back up again I decided maybe another time. I was hiking alone and the trail gets even more difficult towards the peak. The saddle was a plenty good hike for me. Coming down was a lot easier on the lungs but got the legs a burning and knees a wobbling. It’s like going down a thousand stairs.

Video Highlights from the Hunter Trail Hike to the Saddle

Picacho Peak State Park gets a “Love Your RV” two thumbs up rating. The park is nicely laid out, clean, well-staffed, and very easily accessible off I10. There is also much history to learn about as this mountain peak has been navigation beacon and stop over spot for people going way back. There was even a civil war battle that took place here. All around the park there are plaques detailing the historic happenings and natural surroundings. I highly recommend it as a RV stop when exploring Southern Arizona. We sure enjoyed our stay there.

Follow our RV adventures! Sign up for the free monthly Love Your RV Newsletter – Receive the eBook “Tips for the RV Life” as a gift. Also head on over to the Love Your RV Forum and chat with me and other RVers about all things RV. – Cheers Ray

Photos from our stay at Picacho Peak SP 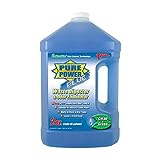