We spent the last two weeks of December at the very southern tip of Florida. Weather was awesome usually sunny and around 80 degrees. 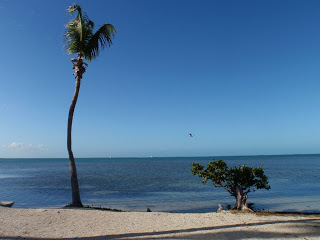 First we camped in the Everglades National Park , where we rented a canoe. We took it out on to the bay and down one of the inland rivers lined by mangrove trees. Wildlife was everywhere and from the canoe you get a great perspective on it. We saw tons of birds, like pelicans, ibis, herons, turkey vultures, storks, ospreys and on and on. We also watched a dolphin play with a fish it had just caught, observed a little manatee eating plants from the rocks and docks, and saw a tarpin swim through the very shallow bay waters trying to get back out to sea. One thing that was weird were signs in the marina parking lot saying that the vultures will eat the rubber trim from you car windows! bizarre! 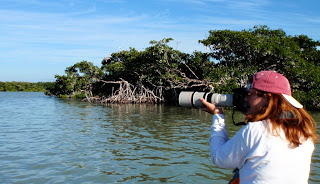 Next we moved down to the keys for Xmas. We booked a week at a nice RV resort called Sunshine Key as a gift to each other, rving is very expensive in the keys due to lack of land. Of course we went and saw the famous Key West and took a trolley tour around the town. It’s very touristy but was cool to hang out for the day. The nicer place for us was Bahia Honda State Park. White sandy beaches, turquoise waters and waving palms, aahhhhhhh. We rented a couple kayaks and had a great day on the water. Also got some snorkel and swimming time in on another day.
Only downer was my so called waterproof camera leaked and is now toast, so enjoy this last video. 🙁

Happy New Year! Next we are heading to the west side of Florida in Ft Myers, Tampa area for a few weeks exploring what’s over there. Stay tuned.