About a year ago I popped my RV solar cherry and installed a simple little 200 watt RV solar kit from a company called Renogy. We didn’t have too much dough to spend on solar, but I believe I got a good bang for the buck with the roughly $400 dollar kit. Renogy panels seem to get very good reviews and after a year of use I’ll add to that with a full thumbs up. They are light weight but sturdy and put out decent amounts of power.

With the 200-watt starter kit, we were able to keep all our smaller electronic devices, camera batteries and 2 laptops all charged up plus top up our 2 six-volt golf cart coach batteries for the evening hours. We spent many weeks out boondocking where we never had to run the generator. As long as we stayed conservative with our energy use and the sun shone most of the day we could enjoy the peaceful atmosphere.

We found that 200 watts of solar power was not quite enough to power a few of our larger electronic devices like for instance Anne’s 21” iMac computer or our 43” LCD TV. Both can draw anywhere from 50 to over 100 watts each. This is fine and dandy when the sun is strong and high in the sky, but as soon as it is gone we are dependent on our battery bank and whatever sun’s energy was stored in there. The large computer and TV can be easily run off my Champion Generator, but it sure would be less of a hassle and quieter to have the solar panels and 12-volt batteries power them instead.

Two other reasons for the upgrade are cloudy days and short winter days. Doubling our solar power might allow us to get by with just solar energy where last year the generator had to be fired up. Also, with these issues in mind I upgraded my battery bank from two big 6-volt golf cart style batteries to a bank of four. 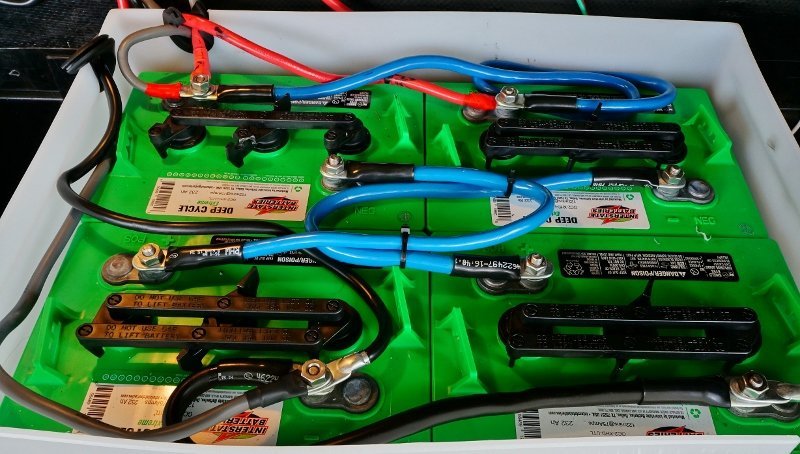 Boondocking almost exclusively from December to May on 200 watts of solar and 232 ampere hours of battery capacity was learning experience for me. It showed me that around 400 watts of solar and 464 AH of battery capacity should be the sweet spot for our particular energy needs. Rather than conserving power like mad, we can be a little more liberal with things and maybe run some “just for fun” stuff.

Since I had just completed the original Renogy kit install one year ago and it performed perfectly I only had to repeat the install process.  To expand to 400 watts, I simply purchased the same items found in the original 200-watt kit minus the charge controller. 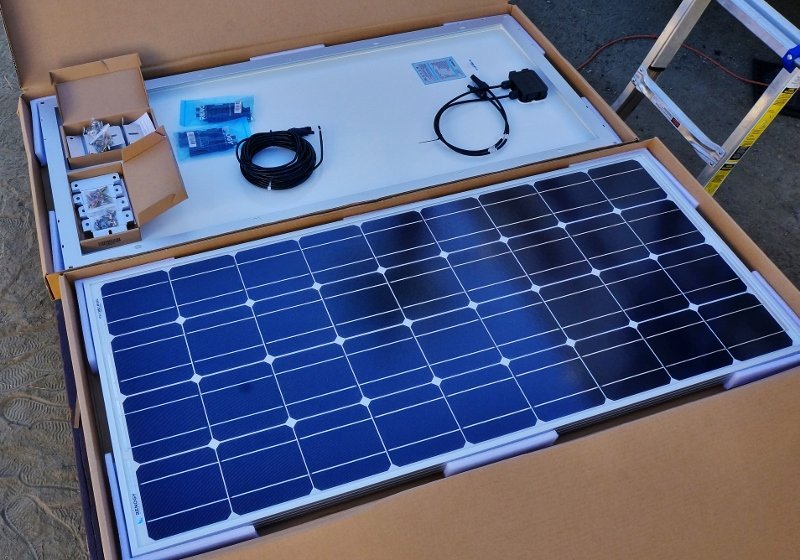 When I laid down the original 100-watt panels I did so with a future expansion to 4 panels in mind. I had envisioned mounting four 100 watt panels at the very front of the fifth wheel. Here my reasons for this decision:

Attaching the Solar Panels to the Roof

I decide to employ the same roof attachment method I used for the first two panels. I used the screws that were included with the Z-bracket mounts from Renogy. I first laid down some Eternabond Roof Tape under the aluminum Z-brackets. I use the tape as a bit of protection for the rubber roof membrane and to help seal the screw holes. It also provides a clean surface for the sealant to adhere to.

Then marked and drilled pilot holes for the screws using a 1/8th inch bit. Next I put a layer of Dicor lap sealant underneath the Z-Bracket and dipped each screw in more Dicor. I was careful when tightening down the screws to not overdo it and cause them to lose their bite. Finally, I applied a liberal amount of more Dicor sealant all over the bracket and screw tops. 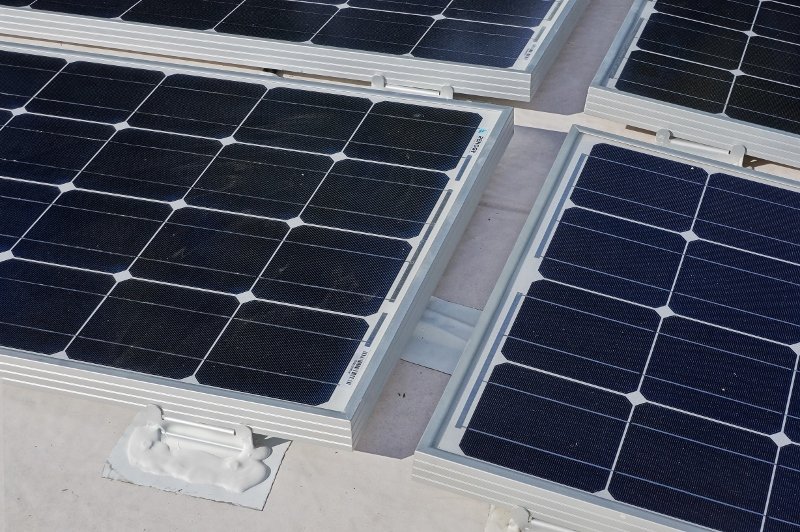 This system of mounting the solar panels has worked well for me. Our original two panels have been there about a year now and are as securely fastened as the day I installed them. In that time, we have travels thousands of miles in all sorts of weather conditions and on many rough roads.  However, I do still check them often for any signs of loosening.

Our (walk on capable) fifth wheel roof is covered with 3/8th-inch boarding and the panels are rather lightweight at 16.5 lbs. The 8 screws per panel plus the Dicor sealant seem to be plenty to do the job. But many RV roofs are different and may use much thinner boarding so I’d advise folks to do their homework. Here is an informative article on solar panel mounting by AM Solar. They use a special 3M double-sided tape. I’ve also read of people using well nuts or devices used to hang heavy things on walls.

Running the Wires Down to Charge Controller

I ran the wires for the two new panels in parallel exactly the same as I did in the initial Renogy 200 watt kit installation. I used a pair of Renogy MC4 branch connectors to easily parallel the new panels.

To hold down the wires running across the roof, I again used some 4″ Eternabond tape. It works very well on my rubber roof and makes the install look very tidy I think. Rather than adding a junction box for the parallel wired panels on top of the roof I ran another set of positive and negative extension wires down below following the same path as before.

I did have a bit of a goof up when drilling an extra hole through the roof for the new wires. Doh! See video below for a look.

Then, right near the charge controller input I soldered the wire runs together to form the final single positive and negative connection to the controller. It made the upgrade very easy and kept the wiring at the recommended gauge for the Renogy panels. The wire run from panels to the charge controller is about 15 feet and each pair of two panels is supplied by its own 10 gauge wire pair. 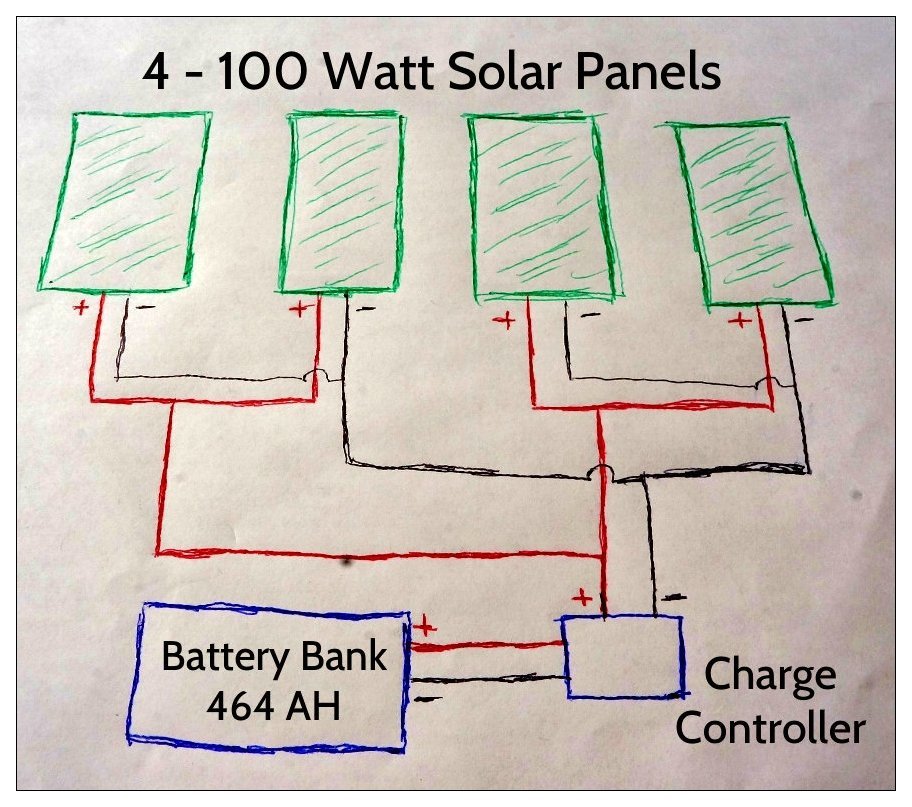 The added panels and batteries are just part of this winter snowbird seasons solar upgrades. With luck, Santa will soon be delivering me a new Trimetric TM2030-RV battery monitor and Bogart SC2030 Charge Controller w/battery temperature sensor. I’ll of course, be detailing the installation of these items and later on how the whole upgraded system performs once we hit the boondocks. Can’t wait! 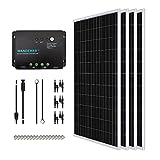 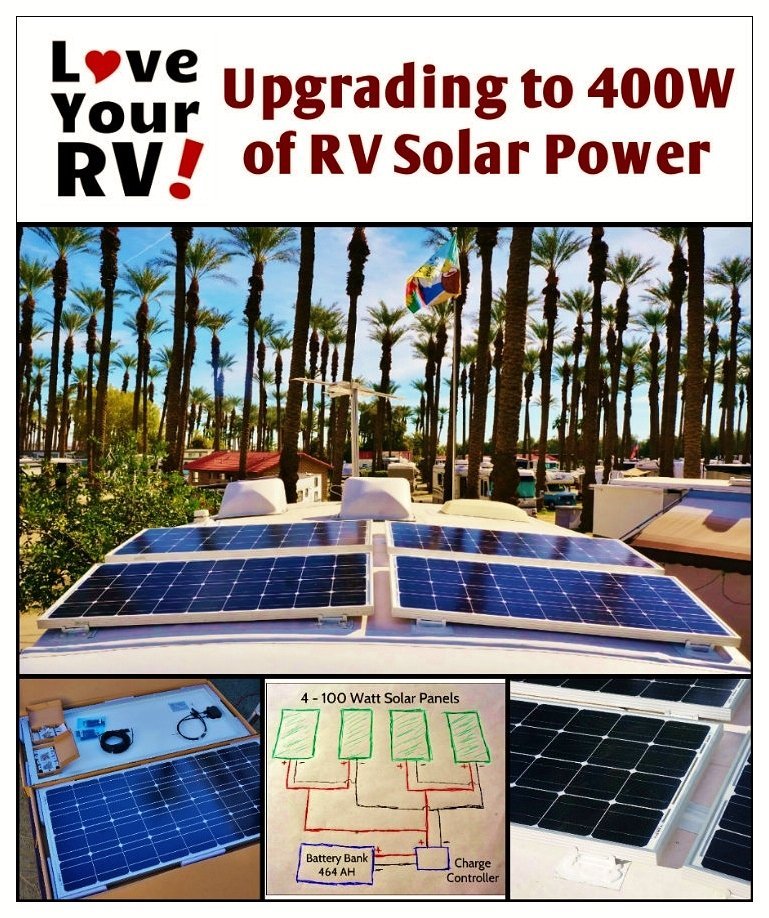