This snowbird season we decided to take a few weeks in mid-March and explore the area surrounding St. George and Hurricane, Utah. Locate in the lower elevations of the extreme south-west corner of the state the area tends to be a little warmer than the rest of Utah. Average temperature during our stay ranged from 60F all the way up to 80F degrees.

There are seemingly endless places to visit and attractions in this pretty corner of Utah with the top billing, of course, going to the breathtaking Zion National Park. Since we had visited Zion a few times already and the spring break crowds were in full force we were on the hunt for a bit more out of the way locations to explore this time. Yant Flat fit the bill in spades.

What the Heck is Yant Flat?

Yant Flat (also referred to as the Candy Cliffs) is a large expanse of reddish-orange sandstone protruding from the mountains of Red Cliffs National Conservation Area to the north of St. George Utah. The sandstone formations are remnants of ancient petrified dunes which over time have been pushed up and exposed. The forces of nature have slowly carved them into all sorts of fascinating shapes and patterns.

Getting to Yant Flat

Making your way to Yant Flat is a little bit difficult involving a narrow sometimes red dirt sometimes rocky gravel backcountry road, a little hike through an alpine forest and some scrambling down fairly steep sandstone cliffs. In my mind, it was all well worth it and only added to the days feeling of adventure.

We set off from where we were staying lakeside at beautiful Sand Hollow State Park and drove a short way up Interstate 15 to the town of Leeds, Utah. From there we took a road called Silver Reef Road to Oak Grove Road which then led us to FR 302. At this point, the road turns to gravel and narrows. For the first couple miles, small roadside campsites dot the journey in but soon you pass a sign saying “RECOMMENDED No trailers beyond this point”. You know you are in store for some switchbacks. (See Google Map Route)

It’s basically a 1 and ½ vehicle width road with occasional pullouts to aid navigation when meeting oncoming vehicles. Lucky for us in our wide dually truck we never met any. Compared to many of the wash boarded desert roads I’ve been on this one was in good shape. The challenging part of it was more the sharp sometimes hair pinned corners and steep inclines/descents, with sheers drop offs. With no guard rails or shoulders, it can be a little nerve-racking for the passenger.

The approximately 10 miles to Yant Flat trailhead ends up taking about a ½ hour. Don’t expect any obvious signs just look for a spot with 3 or 4 parking spots and a tiny BLM pole marking the entrance. There are a few large boulders blocking off what looks like an old jeep trail, now the hiking path. 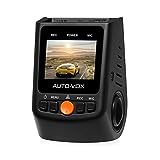 Not available
View on Amazon

The trail out to Yant Flat is fairly wide, being an old 4×4 road, so easy hiking. For the first little bit, the path slowly drops down in elevation flattens out for a while and then the last half is a slow climb. It gets a slightly more difficult near the end as the trail turns to soft sand reminiscent of a coastal ocean dune. At a leisurely pace, the 1.5-mile hike took us about a half hour each way.

The hike meanders through a beautiful high desert alpine landscape filled with small pines, shrubs, prickly pear cactus, wildflowers etc. Crossing a few little dry washes along the way. Being the start of spring we were treated to a plentiful number of early blooms. Every once in a while the view would open up and off to the east we could see all the way to Zion National Park and it’s huge stone monoliths. The West Temple, the Sentinel and the Watchman being particularly easy to spot even with a haze in the sky.

Then suddenly the forest gives way to the amazing orange, red and white Yant Flat formations below and expansive views of the region between St George and Hurricane, Utah. I could even see our tiny white spec of an RV over at the Sand Hollow State Park. The scale of the place is hard to take in at first but became extremely clear when I spotted a couple other hikers on the sandstone far below. They looked like ants crawling on a melting orange creamsicle. Too Cool! 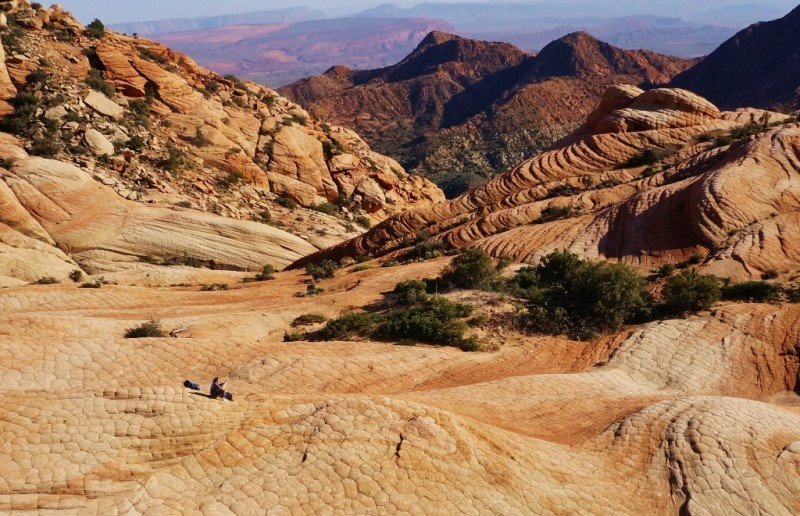 The view from the trails endpoint is impressive but to truly appreciate this place you have to get down into the so-called Yant Flat. I’m not sure if it was someone’s idea of a cruel joke but the Yant Flat is definitely not flat, much it is steep sandstone cliffs. Finding a path down that was shallow enough was a bit of a chore. The best way was to the east side of the formation to the left as you arrive on the trail in. Once we picked our way down things flattened out a touch. We were able easily to scramble around the dips, knobs and rolling hillsides.

One great thing about sandstone is it offers a slightly gritty surface so with the right footwear you can travel along a fairly steep incline with relative ease. But, just in case, I like to carry my lightweight Leki hiking pole as extra insurance. A fall way out here would not be fun times. 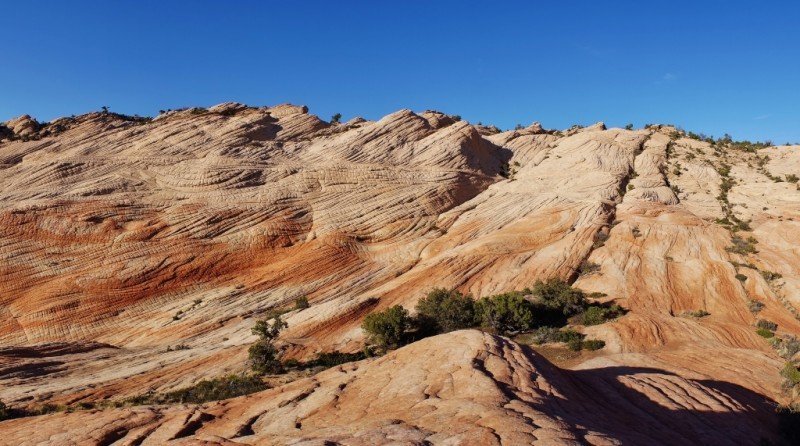 I was amazed by the patterns formed in the sandstone. Some of it looked like an elaborate checkerboard with other sections resembling a cobblestone street. Only these cobblestones were a foot or more across. As the sun sank lower in the sky the colors started to really pop and I could see where the name Candy Cliffs came from. Parts of the bizarre landscape look like those banded swirling hard candy treats handed out a Christmas.

We hung out for a few hours exploring the Yant Flat cliffs, the far off views and soaking up the it’s most peaceful atmosphere. However, soon the sun neared the horizon and it was time to hit the trail back before the dark and much cooler temps arrived. Another fantastic memory added to this year’s snowbirding adventures. 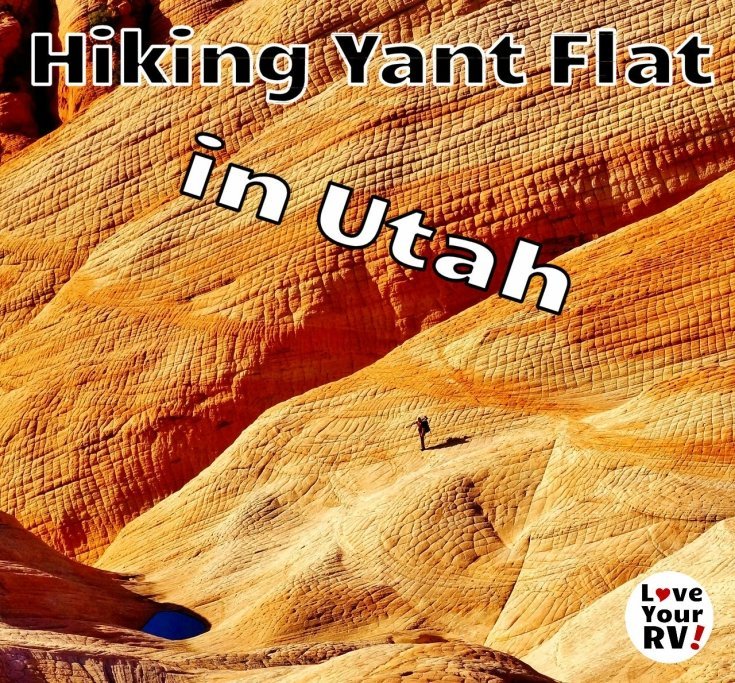