Well, it’s now mid-February, and frigid air from the polar vortex has even spilled out onto the west coast of Canada, dropping our usually mild winter temps down under the freezing mark. Instead of the regular steady stream of Pacific Ocean storms bringing cool, wet weather but at least above freezing temps, we now have snow and ice!

I thought this would be a perfect time to go over the things I’ve added to the RV to help keep us warm and dry this winter. In past years we have just pointed the rig south and drove until it was warm. But this year, that option was off the table, and we found ourselves staying put on Vancouver Island.  So, in late summer and early fall, I installed many different products to prep the RV for cold-weather living.

As I installed most of these items, I published a post/video about them, which I will link back to. Just click each headline to view. This post will update how the product has performed for us over the last couple of months of use, particularly during this recent cold snap.

Video Detailing 10 Items for Winter in an RV

One thing I decided to do was skirt around the bottom of our fifth-wheel trailer. RV skirting has several benefits, with the primary one being the prevention of frozen plumbing pipes, valves, and tanks. By installing a skirt all around the outside, you can trap a column of warm air under the RV. Electric heaters or light bulbs can be added as the temps drop lower.

Furthermore, the skirting saves money on heating costs and provides extra space to store items out of the weather. For my fifth wheel, I even framed in a little shed area under the front overhang and covered it with skirting, including a zippered access door.

I chose an easy to install DIY kit from a company called EZ Snap for the skirting. The kit came with rolls of their durable diamond weave vinyl skirt material and namesake plastic fasteners. I liked that the EZ Snap skirting could be put on and off quickly and was compact and lightweight to store. 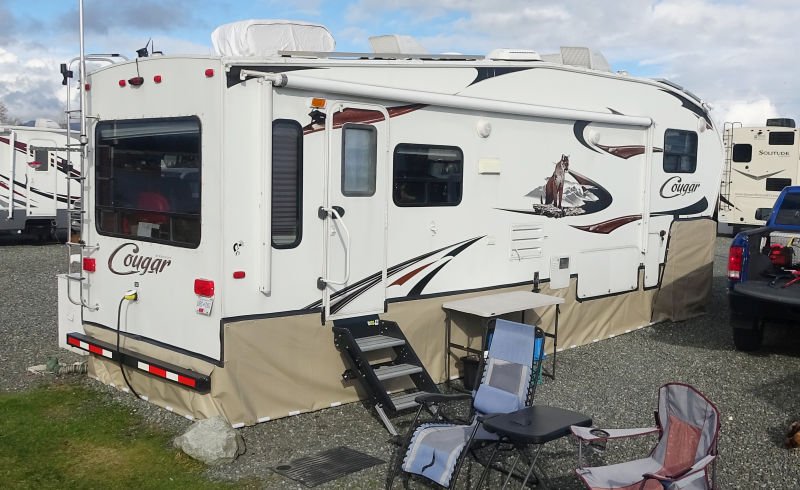 Most importantly, it has handled the high winds of our coastal winter storms. We have had 6-7 big storms with winds up to 80 kph (50 mph) and one or two up to 100 kph (60 mph). The skirting held in place, and I had only had a couple of the snaps break one time when a section of the fifth wheel overhang billowed out during some huge gusts.

One extra I added was a run of 3M No Residue duct tape all around the top of the skirting. This helped keep rain from running down the sidewall and behind the skirting and reinforced the snaps. I’ve tested the tape after being on a few months and like advertised no residue was left. It’s also held in place well. 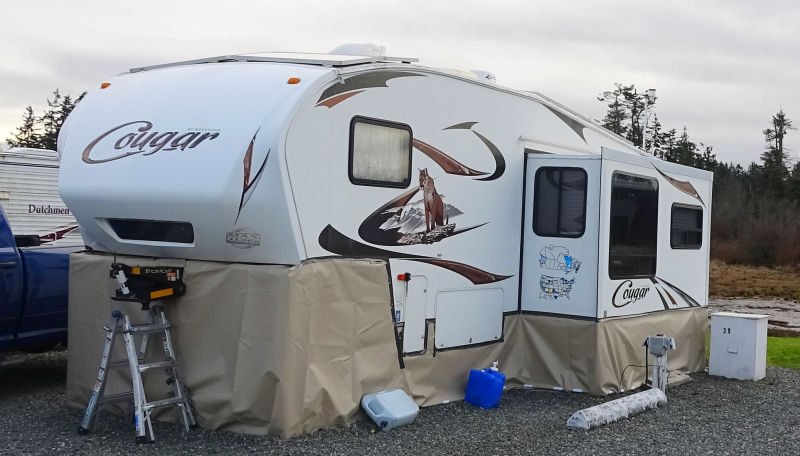 Next on my list was a heated freshwater hose. Even here on the BC south coast, we see enough below freezing nights and the odd sustained cold snap to make it a worthwhile purchase. A person could use the onboard fresh tank or add heat tape and foam to a regular RV water hose, but I decide to spend the money and get a quality heated hose. I went for the Camco heated hose with a built-in power regulation strip. No external thermostat to mess with. The hose automatically adjusts to provide just enough heat to keep it from freezing. 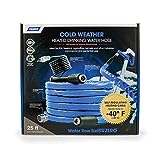 The Camco hose is made in the USA, has a 3-year warranty, and is rated to a low of -40C.  So far, I’ve had zero issues with, no leaks, and no freeze-ups. I leave it plugged on all the time, and it automatically does the job. I was encouraged when one of the park’s maintenance workers commented that it was a great hose, and they rarely see campers having freeze-up problems when using the blue ones.

A dehumidifier likely isn’t required for drier inland winter locations, but here on the coast, it’s a must-have! It’s by far the best investment I’ve made for the cold weather here. The average outside humidity is so high here that condensation inside poorly insulated RVs is a common problem. The condensation can eventually cause wood rot and mold growth.  That’s concerning to one’s health and can lead to expensive repairs to fix the problems.

I picked out a 19-pint desiccant type dehumidifier made by a company called Ivation. It had several positive reviews from other RVers and boaters in similar winter conditions to us. Unlike compressor type dehumidifiers, desiccant type put out warm air as they heat a spinning desiccant wheel.  Perfect for cool, damp weather. They are lighter and smaller than a comparably sized compressor-style unit. The drawback is they don’t work well in hot moist climates like, say, Florida in summer. 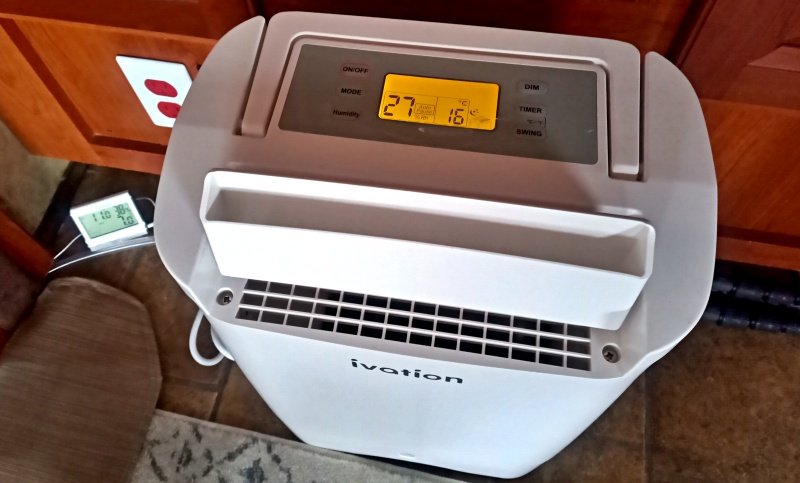 The little Ivation has performed superbly at removing moisture from our RV. I have its drain hose plumbed to the outside, and it’s almost a constant drip. Our inside humidity stays low at around 30-40%, and we have had no condensation issues this winter. I’m able to keep the roof vents closed if I want to help keep the heat in. Even after a hot shower, the bathroom mirror doesn’t fog up. Another perk is our bath towels last much longer between washings since they dry so quickly. Without the dehumidifier, they wouldn’t dry thoroughly between showers and soon sour.

The only complaint with this Ivation 19 pint dehumidifier has been occasional rattling/chattering gear noises as it runs. I’ve read in other reviews of this being a complaint as well. I have heard that the company is pretty good and will stand behind the warranty so I’ll have to see how it goes. Will keep using it for the rest of this winter and decide if it needs to be replaced.

Because our Keystone Cougar 30′ trailer is only a 30 amp RV, I’ve had to be a little picky about the heaters I use and where. I use a pair of low-wattage heaters, usually one at each end of the rig, to balance things out. I place a 700-watt oil-filled heater in the living room area and a 900-watt fan heater in the bedroom during the day. The dehumidifier is located midway and puts out around 350 watts. Anne also uses a heated throw blanket if she needs a boost in warmth. At night we use the fan heater and put it on the kitchen counter, and Anne uses the electric blanket. 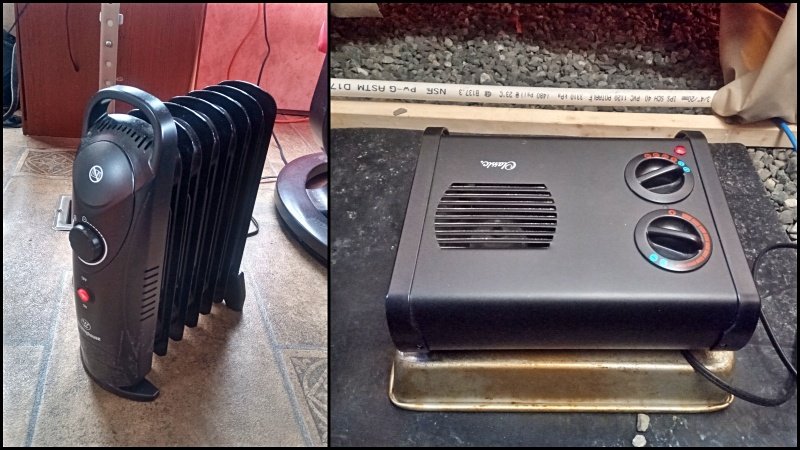 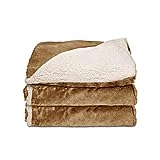 This electric heating setup has allowed us to use very little propane over the last few months, only around three 30 lb cylinders worth. Overall the winter here has been milder than expected. That was up until this week when the polar vortex hit and has plunged the temps much lower than usual. I’ve placed the 900-watt fan heater under the skirting at these lower than freezing temps and also running the RV gas furnace to prevent the RV plumbing from freezing.

I have the RV gas furnace thermostat set to 15C (59F) during the night and 18C (64.4F) during the daytime. Outside temps are currently averaging around freezing during the day and -5C (23F) at night. Our propane use during this cold snap is now averaging about a 30 lb tank per week.

RV roof vents are a significant source of heat loss in an RV as warm air rises and pools at the ceiling. To prevent it, I stuff insulated vent cushions inside them. Being on the rainy coast, my rig is also equipped with outside plastic covers that allow the vents to be open when raining. Those have proved useful to keep snow off the vent lids and prevent ice ups. 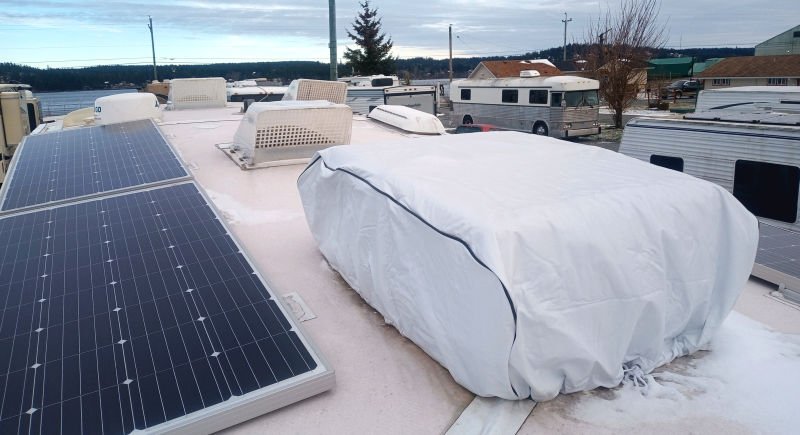 For the rooftop air conditioner, I added a vinyl winter cover and have temporarily installed some Reflectix foil insulation above the inside vents to block out cold air.

Windows are another big heat loss area in an RV. Thankfully we have double pane windows, but even so, they can get quite cold. One way to combat this is with plastic shrink insulation to provide an insulating air barrier. I chose a 3M company kit and applied it to both of our bedroom windows. We don’t spend any time during the day in there, so we rarely open the binds anyway.

With the window film plus a layer of Reflectix foil and the nightshades, any heat loss and drafts are significantly reduced.  I decided not to do our main living area windows as we enjoy the view and like to get as much light as possible during the day. The coast can be quite gloomy in the winter, so we soak up as much daylight as we can get.

Years ago, I ripped out the OEM RV carpeting. We had dogs at the time, and it was an immense pain to keep clean, and after a few short years, it was in bad shape. We ended up going with vinyl flooring and never went back to carpeting. The vinyl is much easier to keep clean, and since we were always wintering down south, cold floors weren’t a big concern. 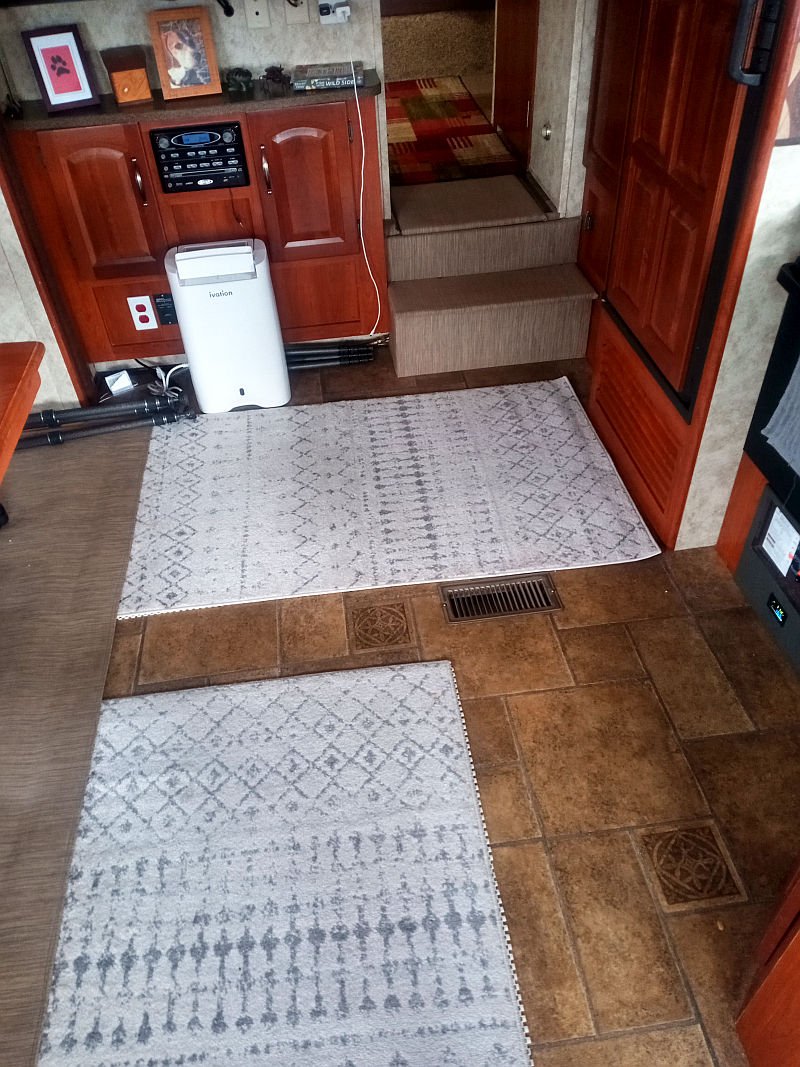 Flash forward to this winter, and cold floors are now a problem. We solved the problem by investing in various throw rugs and bath mats with foam underlay. It made a big difference on our feet and added another layer of insulation.

Unfortunately, we only have a single 30 amp power outlet to work with, so I decided to install a Drok digital amp/voltage meter on the main input power line. Our RV surge protector system also has one, but it’s in place that is hard for us to easily glance at. 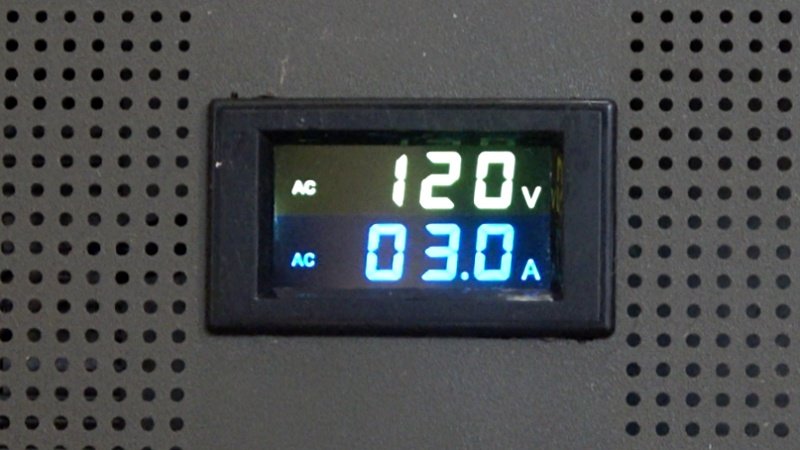 With the new amp gauge right in plain view below the kitchen, Anne and I know how many amps we are currently using and whether we need to temporarily shut off a heater or two to use a high wattage item like the microwave.  This prevents us from blowing the main breaker.

Another meter I added to the RV for the winter was an LP gas level gauge. I ordered a kit off Amazon from a company called Mopeka. The kit comes with a pair of wireless sensors magnetically attached to the propane cylinders’ bottom and broadcasts the levels via Bluetooth. The results can be viewed on an included LED level meter or smartphone app. 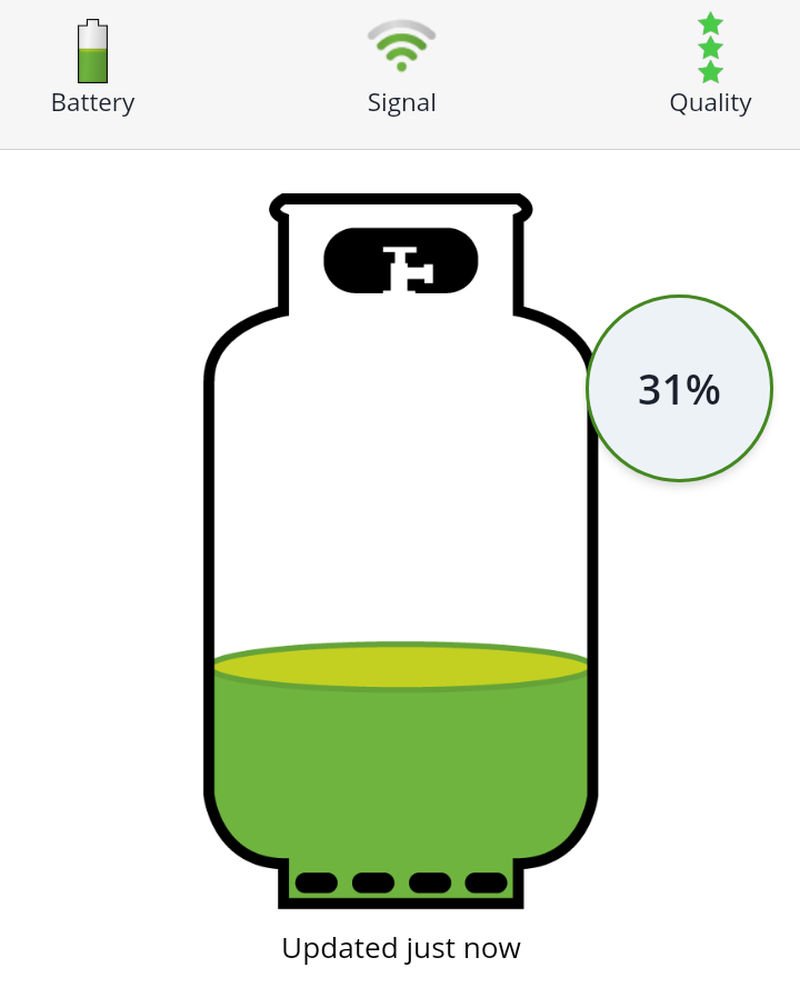 I found the readings were surprisingly accurate. It was handy to keep track of the LP gas level from the comfort of my chair. Unfortunately, one of the sensors has failed. I took it apart and diagnosed that the main IC chip partially shorted out after a tank became frosty. After that, the readings were off, and the sensor would eat a battery in less than a day. I’ve contacted the company explaining the issue and hope to get a new sensor under warranty. (Update – the company is sending me a replacement sensor free of charge)

Finally, the Outland Fire Bowl Anne gifted me for my birthday in September has been a happy addition. It really helps take the chill off on those days when it’s calm and pleasant outside but a little nippy still. It’s awesome to be able to sit back with a warm beverage, the fire, and admire our beautiful estuary view. 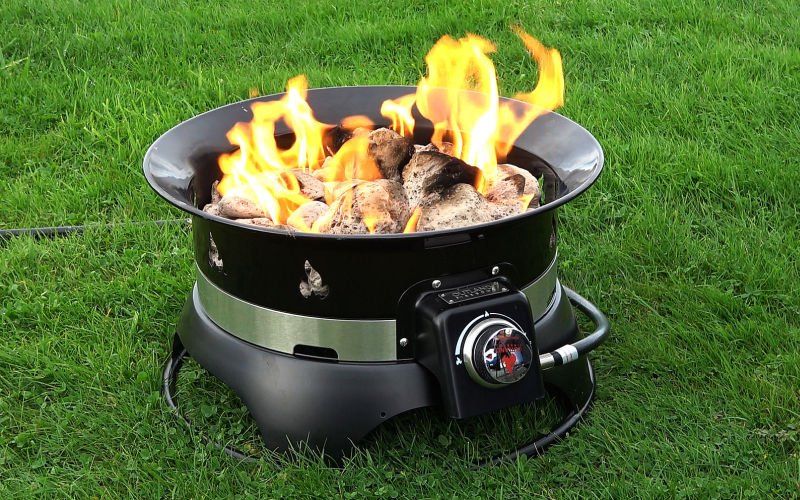 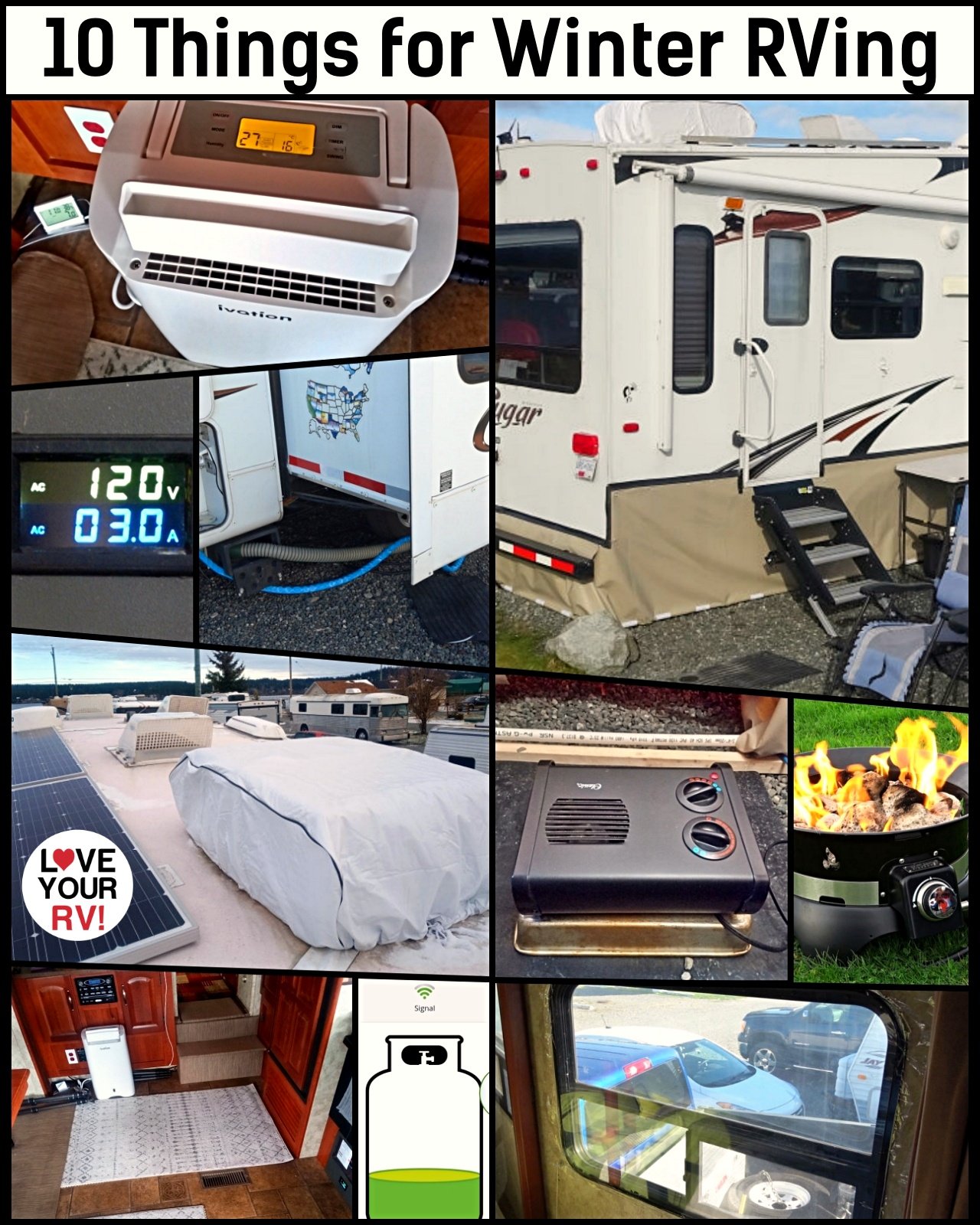