Over the years, I’ve reviewed several portable lithium battery power stations, often referred to as solar generators. For example, the Jackery 1000 and Himcen 740P.  I found both were well built but lacked the inverter power to handle higher wattage AC loads.

So when Bluetti contacted me asking for a review of their AC200P model, I was intrigued. The AC200P has a 2000Wh lithium battery pack and a 2000W pure sine wave inverter. Finally, something could power all the appliances in our RV, maybe even the rooftop air conditioner. 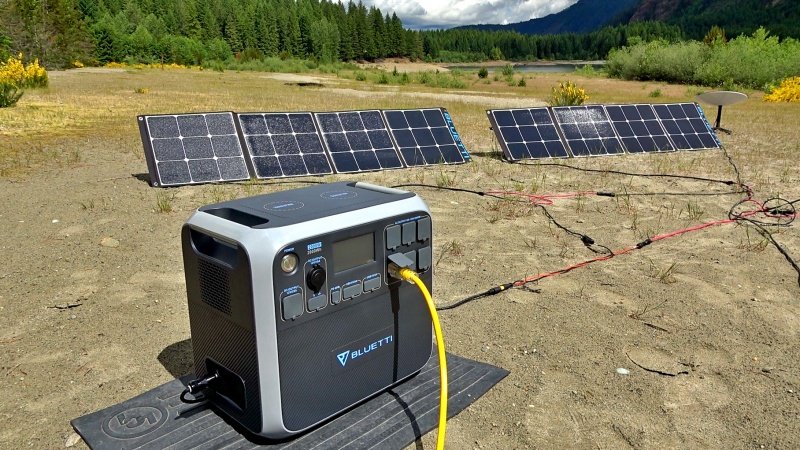 This Bluetti power station feature-rich and has many different options for charging and discharging, so I decided to split my video review into three parts. First, Intro & Features, second Tests & Demos, and third a Real-World Camping Test & my Pros/Cons list.

Fair Disclosure – I received the Bluetti product samples free of charge for review. However, I received no monetary compensation. I maintain complete editorial control. Opinions are my own. After my testing, I do believe the product quality is pretty decent, so I have also decided to become an affiliate earning a small commission on sales purchased via the links below – Ray

In this first of three videos, I introduce you to the Bluetti AC200P portable power station. I go through its many features and capabilities. With a 2000 watt pure sine inverter and 2000 watt-hour battery, the AC200P can power pretty well anything an RVer would need for off-grid camping.

I’m planning to do two more videos soon. The next video will have charge and discharge tests and demos of the Bluetti powering various things around our RV. Then I’ll take the AC200P out camping for 3 days and see how it performs in real-world usage.

Then I test various things around my RV it can power like our air conditioner, Instant Pot, microwave, toaster, air compressor, etc. I also do a total output power capacity test using the AC inverter output @ 600 watts.

Overall I was impressed with the AC200P’s 2000W inverter. It’s robust and puts out stable, consistent power with terrific 4800 surge capabilities. I even tried it at greater than 2000 watts. In my test, it was able to put out 2150 watts for about 2 minutes before the overload function kicked in.

In part 3 of my Bluetti AC200P portable power station review, I take the system out on a three-day camping trip off-grid. I show you how it performs in a real-world situation and then give my overall pros/cons plus final thoughts.

The Bluetti AC200P would be terrific as an off-grid power solution for small RVs like vans, truck campers, small trailers, or home backup power. The 200W folding panels fold up nicely and compact, are not too heavy, and easily connect. I wish they had longer cables included but easy to add using the popular MC4 connections.

For larger rigs such as my 30-foot fifth wheel, it may do the job if solar recharge power is plentiful or a person’s power needs are relatively meager. But, if camping in trees or under cloudy skies, don’t expect the power station to last more than a day or two. You will likely still need to carry a gas generator or another power source to charge up the Bluetti. 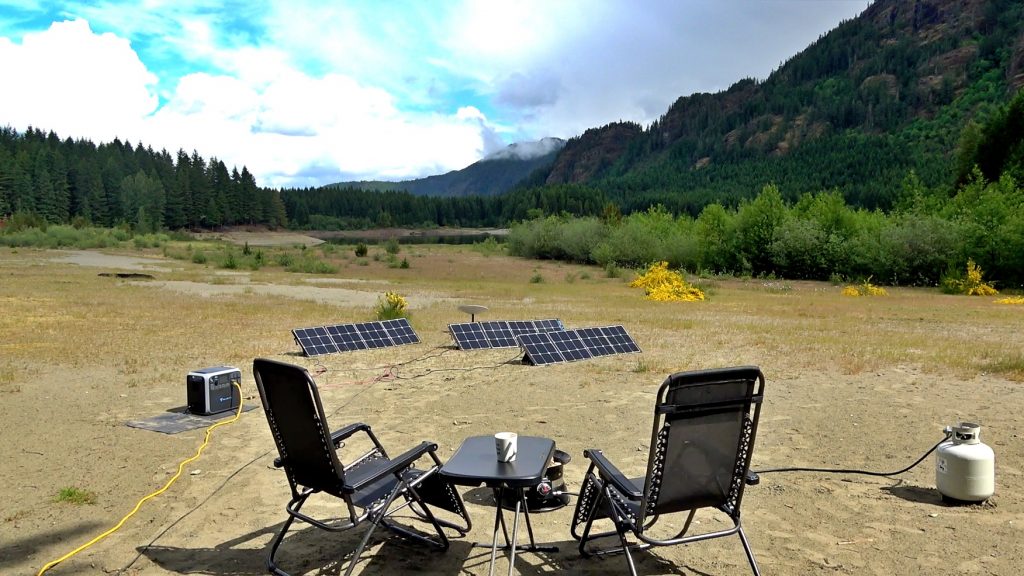 Overall when it comes to today’s lithium portable power station, I give the Bluetti AC200P a thumbs up. Well built with a great 2000W AC inverter, fast charging, long-lasting LIFePO4 battery pack, and all the different outlets one needs. I plan to use it for my boondocking trips and come back in about 6 months or so with a long-term update.

In this video, I announce that Bluetti has asked me to giveaway one of their AC200P Portable Power Stations. Good luck!

Email rvhappyhour@gmail.com with the text Bluetti in the subject. Drawing on – August 3rd, 2021  CONTEST NOW CLOSED, Thanks, Ray

Congrats to David from Nampa, Idaho 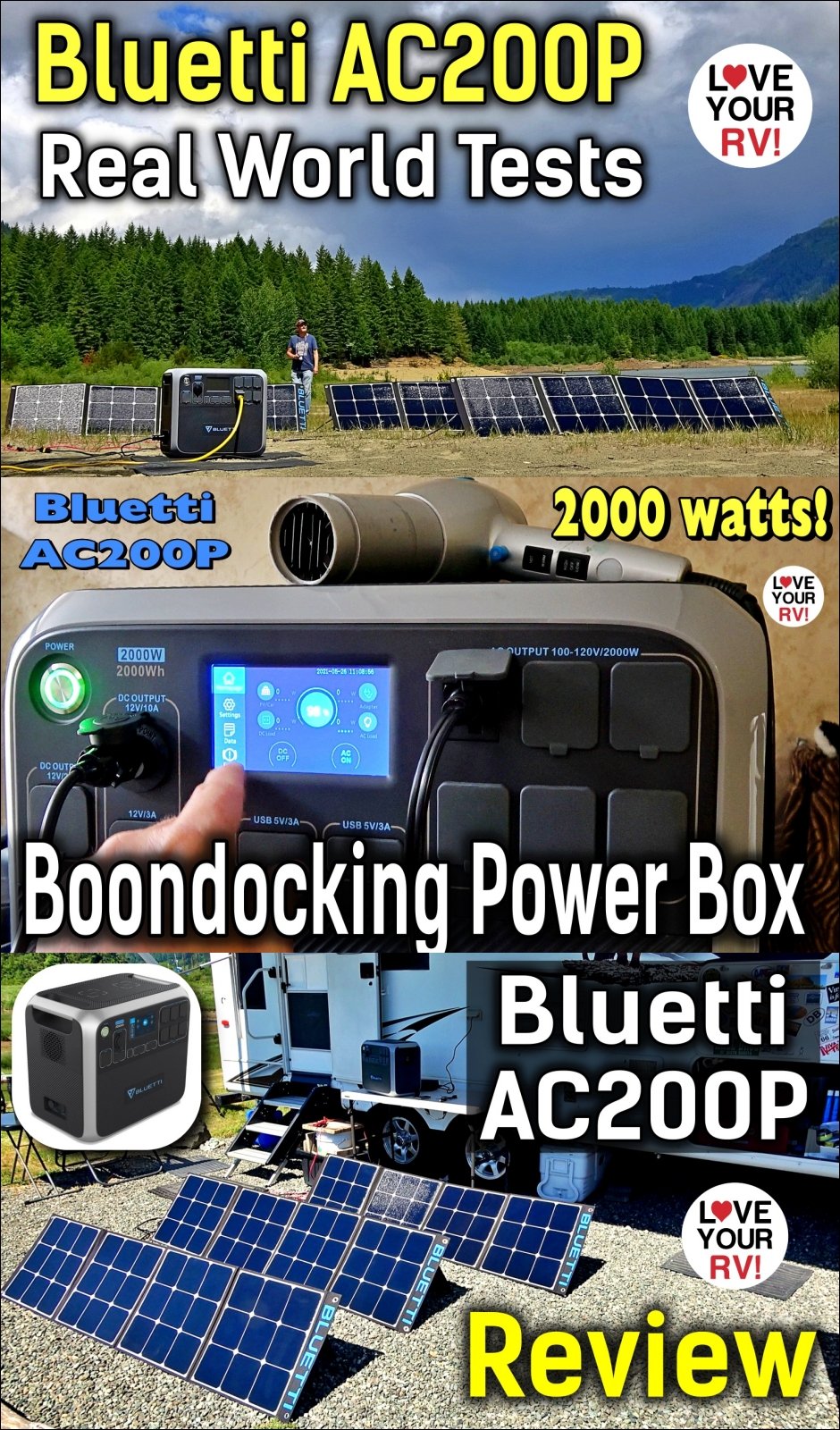