Over the years as my boondocking power system has evolved I’ve tried to make sure things are safe. I’ve installed fuses or breakers on each non-grounded wire run. A little while back I even added what is called a catastrophic fuse as a final failsafe device. My system had grown to include four large six-volt batteries packing a significant amount of capacity (464 Amp Hours). I figured the extra fuse would be prudent.

The catastrophic fuse sometimes called a terminal fuse, is a Class T (fast acting and compact) fuse installed as close to the battery as possible and is there in case of a dead short circuit.  Like for instance dropping a tool or other metal object across the positive and negative battery lines. Without the fuse as protection, the wiring could overheat, melt and even lead to a fire.

My original cat fuse was installed roughly 6 inches away from the battery box with all the 12 volt DC + loads on one side and just the battery bank positive cable on the other. A fellow boondocking buddy had gifted it to me and helped me with the installation. It’s a commonly used catastrophic fuse block I’ve seen included in many RV boondocking power systems.

Since that time though I’ve come across what I believe is an even better solution in the form of the Blue Sea Systems brand MRBF Terminal Fuse Block. It’s a fuse holder that attaches right on the battery terminal itself. You can’t get much closer than that!

The companion Blue Sea terminal fuses come in amperage ratings from 30A to 300A. These fuses are designed for rugged marine environments. Being ignition safe and weatherproof they are quite suitable for use in the RV.

Installation was simple. I made sure the battery terminal was clean then added a layer of Ox-Gard to the mating surfaces. The Ox-Gard antioxidant compound prevents corrosion, helps with conductivity and keeping connections cool.

Choosing the right fuse amperage takes a little calculation. You don’t want the amperage rating to be higher than the wiring its protecting. IE. A conductor cable melts and burns up before the fuse blows. But at the same time, you don’t want the fuse opening because it is lower than the maximum current draw the battery bank may put out during normal operations.


How I Decided on the T Fuse Amperage Value

Note: There is a wiring mistake in this video. The red wire from the other battery should be on the lower part of the fuse block. Sorry for the brain cramp. – Ray

I’m pleased with the new terminal fuse I’ve installed. It will give me peace of mind that my wiring is protected during this snowbirds seasons boondocking fun. 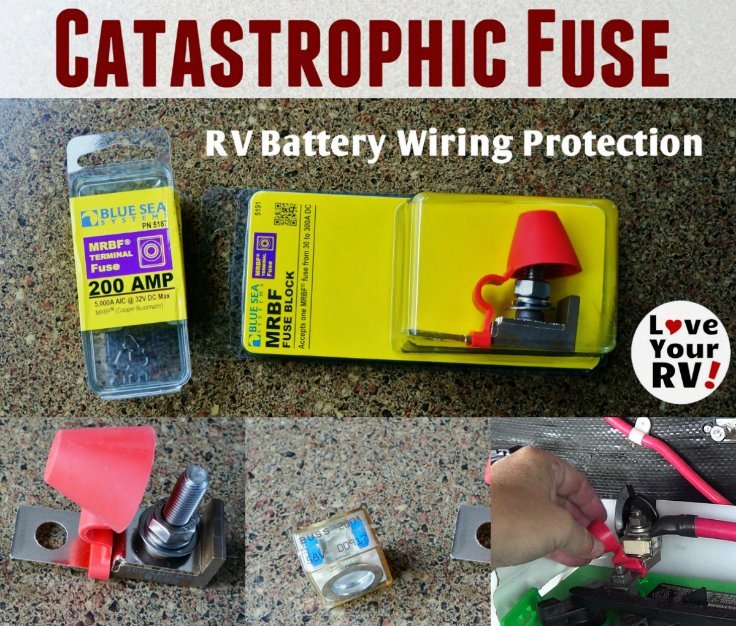