Part One – Getting There

In September 2011 Anne and I spent a couple amazing weeks exploring the Gros Morne National Park area of Newfoundland, Canada. We had already been in the Maritimes for nearly two months visiting New Brunswick, PEI, and Nova Scotia and Anne was really looking forward to going to Newfoundland. Being a photographer she had always wanted to visit and photograph the unique scenes this rugged island stuck out in the Atlantic Ocean had to offer. Myself, I argued against it when looking at the $350 ferry bill each way to get there. But with her encouragement and speaking with other RVers who had gone, I decided lets go for it. Boy oh boy, no regrets!

The Island is Big!

Researching the trip we quickly became aware of the huge size of Newfoundland and with this in mind we decided to concentrate our 2 weeks or so mainly in the Gros Morne area. Newfoundland is around the size of Texas and sparsely populated. It would be nice to have toured around and seen as much of the Island as possible but I wasn’t into the long drives pulling the RV around. Plus the fuel expense would have climbed high. Turns out there was plenty enough to do and see just in the Gros Morne area.

There are two ferry routes to Newfoundland. The one we took is a 5-7 hour trip ending on the southwest part of the island at Port Aux Basque. The other takes 16 hours and ends up in Argentia near St. Johns on the south east of the island. You can find out more at the Marine Atlantic website. To prepare for the trip and be close to the ferry terminal we stayed at a highly recommended RV park called Arm of Gold. It’s located maybe 15 minutes from the ferry terminal and caters to the Newfoundland visitor crowd with large easy access pull-thrus right near the main highway. They are used to the very early and late arrival RV traffic due to the ferry times. The will even stay up late and guide you with flash lights in the dark to your RV site. Great owners and atmosphere, they even had impromptu music nights in the barn. If you spend more than a few days there like we did you’ll see quite the turnover of RVs. One night I hit the sack and the park was only 1/3 full, next morning I woke up to find it jammed packed with Airstream trailers as a huge caravan moved in late at night.

The ferry ride over was an adventure in itself. The weather changed half way across and the wind started to howl and the seas got really rough. The ships are made for the weather but the winds at 50-60 miles per hour made it too tricky to enter the Port Aux Basque harbor and we ended up sailing in circles just off shore for several hours waiting for the wind to die down. Many passengers including Anne got a little sea sick and were thankful when the ship finally docked after 11 hours. Our poor beagles were in the RV on the vehicle deck the entire time as they don’t allow you down there when the ship is sailing. Needless to say they were ecstatic to see us. Our trip back was the exact opposite with glassy calm seas and beautiful blue skies. This is one thing to expect in Newfoundland, changing weather. I believe this really molds the people living on the island. They are generally an extremely friendly, roll with the punches, happy folk. Amazing given the often harsh climate and rugged, remote landscape. 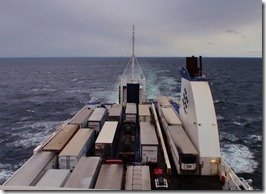 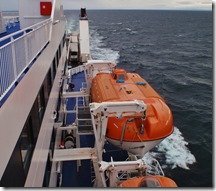 Off the Ferry, Now get ready to drive

So our first glimpse of Newfoundland was the wet slick pavement of the ferry terminal and dim street lights of Port Aux Basque glowing in the mist. Basically we just followed the unloading vehicles long trail of rear tail lights until we spied the visitor center. Originally we had planned to drive to a campground maybe half way to Gros Morne and spend the night but since it was now 2am we hunkered down in the visitor center parking lot and collapsed for the night. After a few hours of shut eye we were up at the crack of dawn excited to hit the road on our Newfoundland adventure. The drive to Gros Morne National Park is about 6 hours, more like 8 when you factor in rest breaks and the fact you’re towing. The more we drove the more excited we became. The scenery stretched out before us was amazing. Distant mountain ranges, marshlands, river valleys, forests, rock outcroppings, etc. The land is remote and very sparsely populated, except for moose! I read there are more moose per square mile in Newfoundland than humans. On our drive we saw many road signs reminding us that in a battle between moose and car, moose wins. 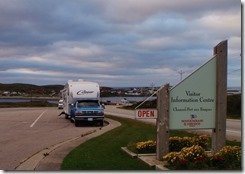 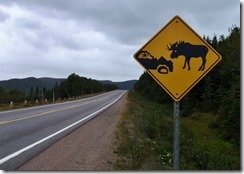 After several hours on the TransCanada Highway, we hit the Town of Deer Lake and stopped for fuel. Another tip for Newfoundland travel, always top up when you can. The distances are long between fuel stops. We then headed up highway 430 towards are planned destination for the next few days in Rocky Harbour. The drive became hillier as we entered to Gros Morne area and the views got better and better. Large flat topped mountains began to appear. A few of the hills slowed the truck down as we had to chug our way up 8-10% grades, but Big Blue was up to the task with her newly rebuilt tranny helping her along. By the time we arrived in Rocky Harbour we could see the ocean again and could hardly wait to get exploring the beautiful area. We had picked out Gros Morne RV Campground as a base for a few days. It is a Good Sam park. Not too bad, but don’t expect a high end resort in this remote area.