The first video covers testing the overall battery capacity in (Ah) amp-hours. I measure the number of total amps-hours recorded at different discharge amperages from 100% full down to an exhausted battery. For the tests, I use my own RVs off-grid power systems, meters,  tools, and appliances.

In the second video, I test the recharge time of the Safari UT using my InteliPower PD9260 converter charging at around 50 amps. Then, using both my 500-watt solar array and the charge converter at approximately 75 amps. I also test my old Interstate golf cart batteries to provide a direct comparison of charge and discharge rates and time.

*Fair Disclosure* I received 3 Safari UT batteries free of charge from Lion Energy in exchange for my review. I’ve become an affiliate earning a commission on sales. However, I’m not sponsored by Lion Energy and receive no direct monetary compensation for the videos and blog posts. Opinions are my own.

First I do an extended slow discharge to 3 Safari UT batteries wired in parallel producing a 12V 270Ah rated bank. Average discharge rate was in the 1-3 amp range. This test simulates an RVer with low power requirements, only running lights and the occasional light load like the water pump plus covering the usually parasitic RV loads.

The third test is for a single Safari UT battery drawn down at 80 amps and simulates a 1000 watt inverter that is being maxed-out to run a higher wattage appliance.

The final test done at 150 amps is a maximum rated discharge test to one Safari UT 12V 90Ah battery.

The Lion Energy Safari LiFEPO4 battery capacity came in close to its rated 90Ah capacity on the first three power tests, but at the max 150 amp rate, it dropped down to 80.7Ah. Still not bad considering the substantial current output. Many similar 12V lithium batteries can’t do more than a 100 amps max rate.

In part two, I test the recharge time of the Safari UT using my InteliPower PD9260 converter charger outputting around 50 amps charge current. Then using both my 500-watt solar system and the converter charger at approximately 75 amps.

These tests simulate me recharging one battery on first shore or generator power. Then, I add in my solar system to simulate a fast charge during a sunny day when out boondocking.

I also test my old Interstate golf cart batteries to provide a direct comparison of charge and discharge rates and time. Two 6V 232AH lead acid versus just one 12V 90Ah Lion Energy Safari UT battery. The lead-acid pair is a few years old, but the results were still quite dramatic.

The Safari UT lithium batteries recharged extremely fast! I wasn’t even able to test the max rate of 100 amps. They will be terrific for off-grid camping. Unlike my old lead-acid type, the new lithiums don’t slowly decrease in charging amperage as they get closer to full capacity.  They charge in a linear fashion soaking up the total available current right to 100% charged. They also don’t suffer the Peukert Effect which greatly reduces a lead-acid batteries capacity under high current loads.

Stay tuned for my Lion Energy Safari UT full review coming in a few weeks time after some longer-term use. 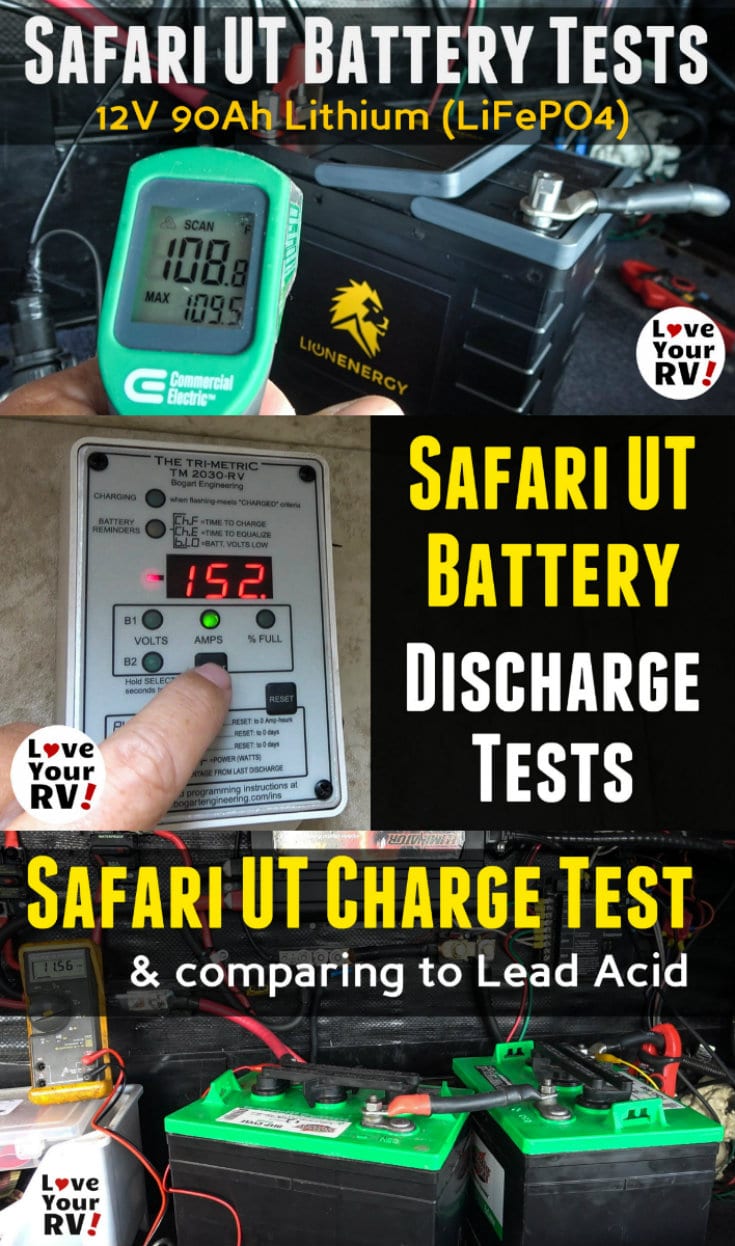