We are coming up on four years since we purchased our brand new Keystone Cougar Fifth Wheel and set out to live a full-time RV lifestyle. I’m pretty impressed with how the trailer has held up considering it really isn’t designed for full-time RVers, but more of a weekenders rig. Like all RVs though we have had our share of mechanical failures and broken items.

I thought it was a good time to look back and list what broke and how it was fixed. So, after 10s of thousands of miles traveled, hundreds of setups in RV Parks, tons of rough boondocking locations, years of daily living here is what has needed to be repaired.

Our Keystone Cougar has very nice cherry wood cabinetry, but the screws they used to attach the door hinges must have been a little undersized. Within weeks of owning the unit, many of the cabinet doors were coming loose and even falling off during transit. 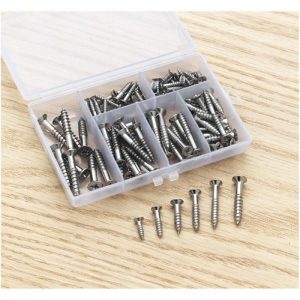 Fix: I replaced them with a slightly larger diameter screw with thicker threads and haven’t had a problem since and we head down some fairly rough gravels roads when pursuing a good boondocking location. I’ve read another way to fix a loose cabinet screw is by adding in a toothpick or two and some wood glue.

While getting some routine maintenance and greasing done to the trailers axles and brakes the RV service shop discovered a cracked bushing in one of the electric brake assemblies. 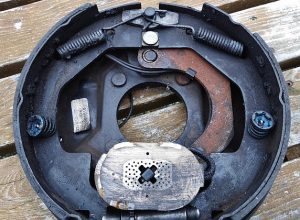 Fix: Since I was out of town and we were on a scheduled to leave, I had the RV service shop go ahead and replace the trailer brake assembly as recommended by them.

One day, out of the blue, our RVs Dometic refrigerator stopped cooling in electric mode. It would work fine using it in LP Gas mode though. 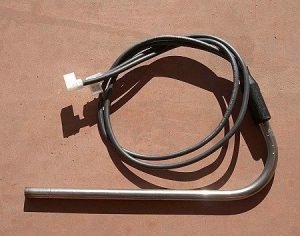 Fix: Being an electronic technician by trade I decided to troubleshoot the problem myself. Armed with my multimeter I quickly determined that the electric heating element in the fridge was defective and no longer able to conduct current and get hot. It had gone open. The part was easy to acquire online, but replacement was a bit of a chore on my particular model. Turns out the whole fridge had to be pulled out to remove the old element and install the new one.

Another electric failure we’ve had involved the water heater. Same as the fridge it would work in LP Gas mode but not in electric. 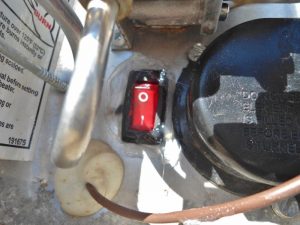 Fix: Once again I dragged out my handy-dandy multimeter and analyzed the electric circuit to determine the on/off switch was bad. The switch proved to be a fairly commonplace one and easy to swap out other than the extremely short wires I had to work with.

One day while inspecting the bowels of the trailer I noticed the waste gate for the black tank had a good sized crack on it near the valve stem. Ack! That was something I wasn’t going to just let go and wait until the smelly black water began to leak out. 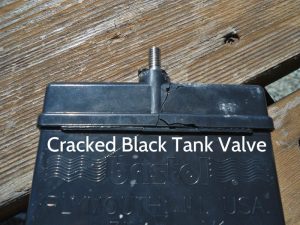 Fix: This was a real messy type job given the location of the waste valves on my Keystone Cougar. I spent a good afternoon under the rig getting leaked on by nasty water. To top it off the way they designed the plumbing system it was almost impossible to get the new valve installed. I ended up cutting a piece of pipe out and using a rubber sleeve. In hindsight, it may have been possible to unbolt a frame rail holding one off the waste tanks and tip it down to get the little bit of space I needed.

Within a few months of ownership, I found a wet spot in the basement storage. Took me a little while to see it was coming from the drain plumbing under the shower. 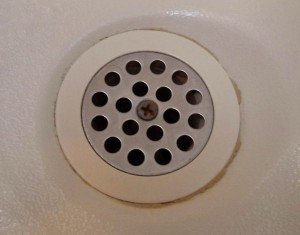 Fix: I disassembled the drain plumbing which was not too difficult at all being it was plastic just threaded together. I found that they had not used enough plumbing putty when sealing the drain. Simply adding some more putty solved our leak.

Over time, I believe from the hard desert well water, our cold water shower faucet started acting up. It became increasingly more difficult to adjust it for a steady stream. 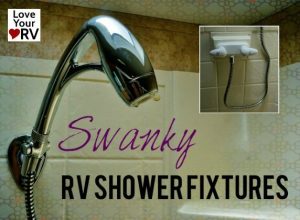 Fix: I ordered up a replacement set of faucets from Amazon. Instead of the more complex multi-turn OEM unit I went with a set of quarter turn faucets. They’ve been a terrific improvement and have a much simpler internal design. The install was very straightforward except for the tight quarters I had to work in. While I was at it I upgraded the crappy OEM shower head to a new Oxygenics brand unit. I absolutely love it, a vast improvement over the original.

After about 9 months with the new RV our propane system started to act flaky. It would intermittently not work with the water heater and the main furnace on one of the tanks. I researched online and found info on how a bad pigtail hose between the LP Gas cylinder and the regulator could be the culprit. 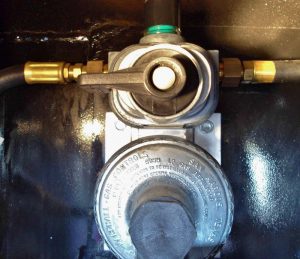 Fix: I replaced both the OEM LP Gas pigtail hoses and the auto switch over regulator with higher quality Marshall brand ones. Over three years later now and the system still works like a charm!

This fault drove me nuts!! The trailer running lights would normally work fine then every once in a while they blew a fuse in the trucks lighting circuit. Most aggravating as it was so intermittent making troubleshooting the issue very difficult. 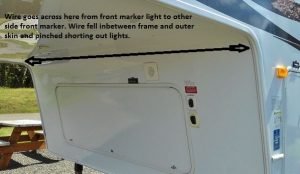 Fix: Finally one day I got it to act up pretty constantly while jacking the trailer up and down off the truck. Turns out a section of the internal trailer marker lights wire had become pinched in between the fifth wheel frame and would short out. 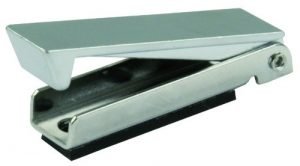 Fix: Easy screw off screw on fix with a bit of sealant. I plan to upgrade all the clips to a metal type in the future.

Over time I found the storage bay locks became increasingly harder to open. I would have to find just the right spot to get them unlocked. 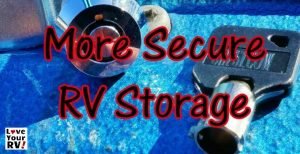 Fix: I ordered and installed a replacement set which use a higher quality round security type cylinder key. Not only are they much easier to open but I now have a unique key which wasn’t the case before with the OEM CH751 key.

I’ve found 4-5 of the plastic end rung holders cracked on our trailers ladder to the roof. It appears to be a poor design. 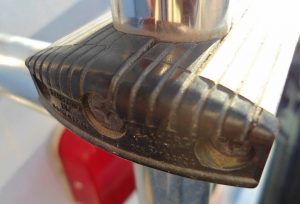 Fix: I carry a bunch of replacement plastic ends and install them as need be. In the future I might look at replacing the whole ladder with a better designed unit.

Recently the sealant used on the long strip of roof gutter began to leak in a few places. It appears they used a silicone based sealant and it is peeling away from the EDPM rubber roof material allowing a gap for water to get through it.

Fix: I used Eternabond Roof repair tape and have covered the whole gutter rails seam where it bonds to the roof. Now the water simply drops into the gutter rail.

While jacking the fifth wheel off the truck one day it made a weird clunking noise and I immediately stopped to investigate. Turns out the gearbox, located between the drive motor and the landing leg, had a plastic stop sheered right off and had begun to spin around on itself. I was lucky I backed off of the power switch before it really made a mess in there.

Fix: I ordered a new gearbox online and installed it myself. I went with an aluminum cased one as an upgrade to the original plastic cased unit.

About a month ago while removing the fifth wheel from the truck my landing jacks clucked and shuddered. I quickly retracted them, only problem is only one retracted, the other remained extended out. 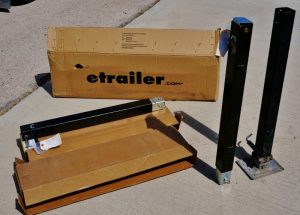 Fix: I removed the bad landing leg and diagnosed the problem as a stripped worm gear collar nut. I decide to replace both legs and ordered them online for around $250. Turned out the install was pretty straight forward on my RV and we were soon back in business. I believe the failure occurred from lack of lubrication on the worm gear. I now know exactly where I need to get some routine greasing to prevent this in the future 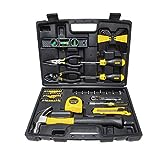 Seems like a lot of broken items but not bad I think considering how we use the heck out of this rig. Talking to many fellow RVers I feel pretty grateful I’ve had no major failures like some have with frames, suspension, windows, bad leaks, etc. Along with these failures we have also needed to replace things that just plain wore out like tires, batteries, axle, seals, brakes, water heater anode rods etc. But I class those as routine maintenance and not a failure in design or faulty part. I feel that being right on top of routine maintenance has really helped reduced my failures list. Love Your RV! and it’ll love you back. 🙂 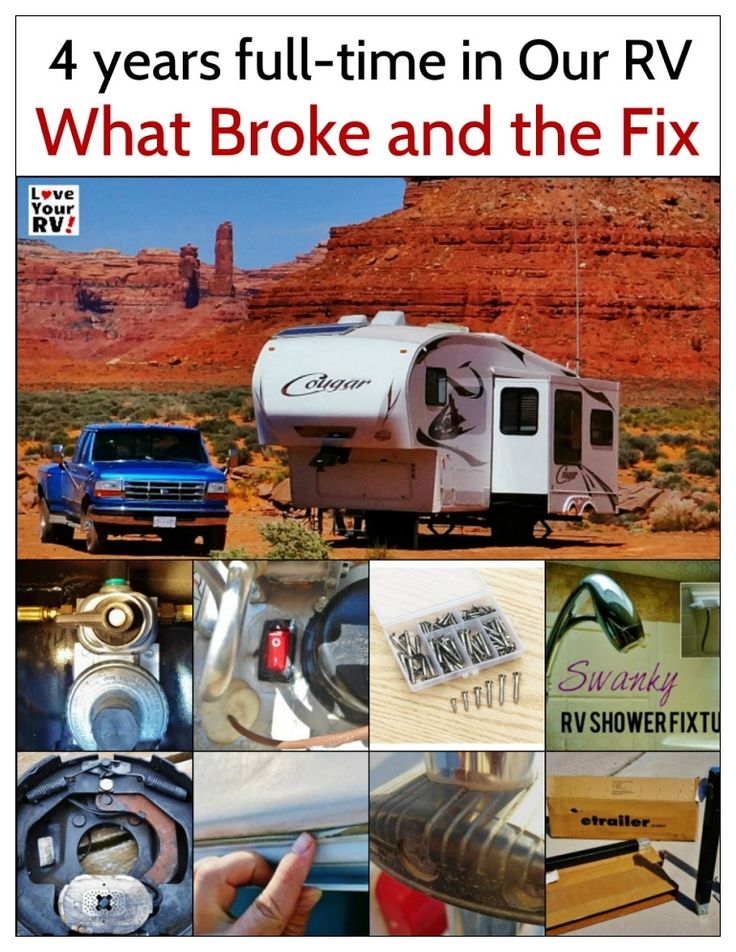